In a letter to the former president, the recently resigned head of Pennsylvania's Eastern District office claims he was blocked from pursuing allegations of voter fraud 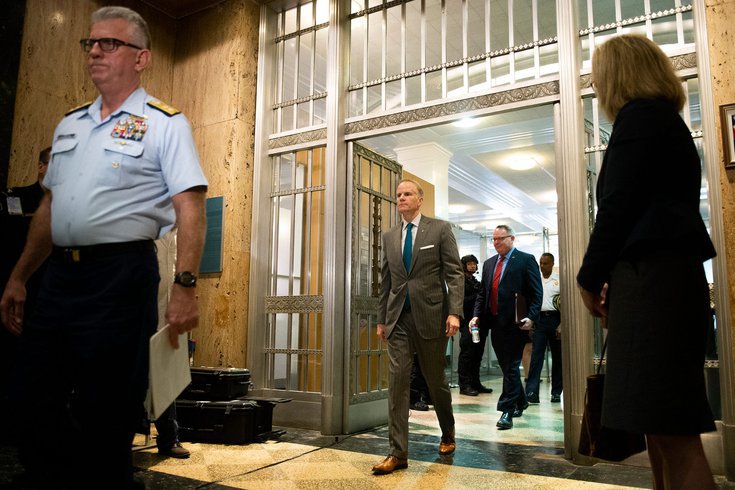 William McSwain, the former U.S. Attorney for the Eastern District of Pennsylvania, which is based in Philadelphia, will run for Pennsylvania governor in 2022.

Republican candidates for the gubernatorial race in Pennsylvania are vying for the endorsement of former President Donald Trump. The list now includes William McSwain, the former U.S. Attorney for the Eastern District of Pennsylvania, who has claimed in a letter to Trump he had been thwarted in his efforts to pursue claims of voter fraud in last November's presidential election.

McSwain, a former U.S. Marine and Trump appointee, resigned in January ahead of the transition to the presidency of Joe Biden. He had been expected to make run for office, but hadn't confirmed his candidacy for governor until after the June 9 letter to Trump became public on Monday night.

In the letter, McSwain cited his record of opposition to progressive Philadelphia District Attorney Larry Krasner, and noted that during his tenure his office charged two Democratic elections officials who stuffed ballot boxes for bribes, crimes that occurred during past Philadelphia primaries.

But in seeking Trump's endorsement for his upcoming campaign, McSwain pandered to Trump's false belief that he had lost the election due to voter fraud, claiming that McSwain was told to refrain from publicizing reports of voter fraud and irregularities. He blamed former U.S. Attorney General Bill Barr for discouraging him. From the letter, via the Washington Post:

On Election Day and afterwards, our Office received various allegations of voter fraud and election irregularities. As part of my responsibilities as U.S. Attorney, I wanted to be transparent with the public and, of course, investigate fully any allegations. Attorney General Barr, however, instructed me not to make any public statements or put out any press releases regarding possible election irregularities. I was also given a directive to pass along serious allegations to the State Attorney General for investigation – the same State Attorney General who had already declared that you could not win.

I disagreed with that decision, but those were my orders. As a Marine infantry officer, I was trained to follow the chain of command and to respect the orders of my superiors, even when I disagree with them.

Barr broke away from Trump's widely debunked 2020 election fraud claims in early December, striking a major blow to the former president as he and his legal team prepared lawsuits in several states, including Pennsylvania. Those efforts ultimately were found to be baseless as courts around the country tossed Trump's legal challenges.

The unproven fraud allegations that later helped precipitate the Jan. 6 Capitol insurrection have nevertheless remained a Republican talking point – and apparently, a way for McSwain to angle at Trump's support.

In an interview with the Washington Post on Tuesday, Barr denied he ever instructed McSwain not to pursue claims of voter fraud.

“Any suggestion that McSwain was told to stand down from investigating allegations of election fraud is false. It’s just false,” Barr said.

The former Attorney General added that he believed McSwain's claim to the contrary was meant to "mollify" Trump. Barr reportedly said he called McSwain to dispute the characterization of him in the letter, and was told the letter was technically correct and that McSwain, "can't have Trump attacking me" if he wants to run a successful campaign.

Barr did say he recalled a single matter about allegations of election irregularities in Delaware County, an issue that was handled by a senior Justice Department official. Barr said McSwain was not told to stand down, and the irregularities never materialized into provable, actionable fraud.

McSwain disputed this in an interview with the Post, claiming instead that he spoke directly with Barr and that the former Attorney General may not remember correctly, or wasn't involved with details about the instructions McSwain received to pass on election fraud allegations to Pennsylvania Attorney General Josh Shapiro. Shapiro was vocal throughout the 2020 election and its aftermath, pushing back against baseless Republican claims of voter fraud in Pennsylvania in frequent television appearances on CNN. He also is expected to make a run for governor next year.

McSwain now joins a field of Republicans who are hoping Trump's backing will give them a leg up in the competition. State Sen. Doug Mastriano, who represents Franklin County, has made headlines this month for spearheading calls for a "Stop the Steal" 2020 election audit in Pennsylvania, similar to the heavily criticized process underway in Arizona.

And Trump ally Lou Barletta, a former Congressman, has likewise echoed the former president on issues related to the coronavirus pandemic as he prepares to run for Pennsylvania governor.

Both Gov. Tom Wolf and Attorney General Shapiro have rejected Mastriano's push for an election audit, vowing to challenge what they call a waste of time and taxpayer money.

Shapiro, who attended President Biden's speech on voting rights in Philadelphia on Tuesday, quoted the president in a tweet referencing the ceaseless, unfounded claims Republicans continue to raise about voter fraud last November. The president called such claims "a big lie" meant to weaken democratic rights.

“The Big Lie is just that. A big lie.” - President @JoeBiden

Pennsylvania is the epicenter of the battle for voting rights. Our Commonwealth is the birthplace of our democracy, and our Commonwealth can save it.

As @POTUS said here in Philadelphia today — we the people will not give up.

Let's get to work, and choose truth over fear. pic.twitter.com/kmQ4Ij3irc