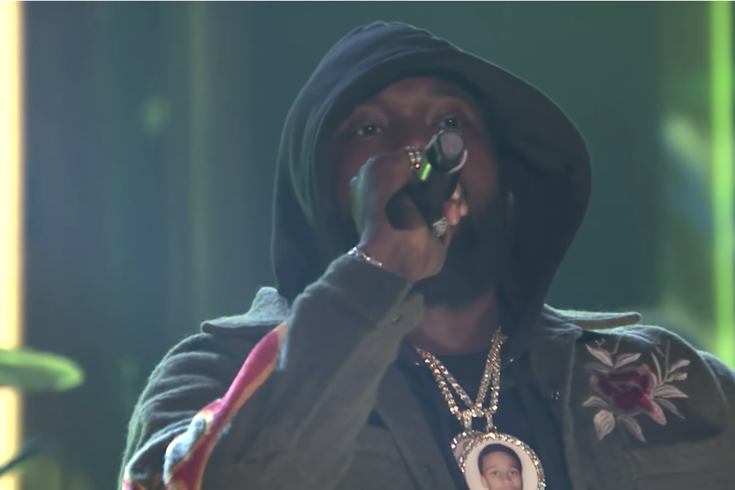 Meek Mill on the Tonight Show.

Here at PhillyVoice, we’re thankful for good music on Thanksgiving, and Meek Mill decided to get into the holiday spirit Wednesday night when he made an appearance on Jimmy Fallon’s Tonight Show.

Mill, ahead of his newest studio album “Championships,” performed a new song titled “Oodles O’Noodles Babies,” which is sort of a funny song title but is actually a pretty introspective look at how he wound up where he is today.

Mill opens the song, which is backed by a laid-back sample, with this knockout quartet:

“Ain’t nobody to give me no hope/I hope my momma ain’t doin’ no coke/I used to wish that my daddy was living/I had a dream that I’d seen him with ghosts.”

So that’s where he’s at right now.

You can watch his performance, which includes a "shoutout to the whole city of Philadelphia," here:

Fans of Meek’s typical rat-a-tat delivery will be pleased to learn nothing’s changed after more than a year between releasing music. On both “Oodles O’Noodles” and the second track, “Uptown Vibes,” he’s still flying through his lines at his trademark register like there’s some invisible deadline.

You can listen below:

“Championships” is out Nov. 30 via Maybach Music and Atlantic.