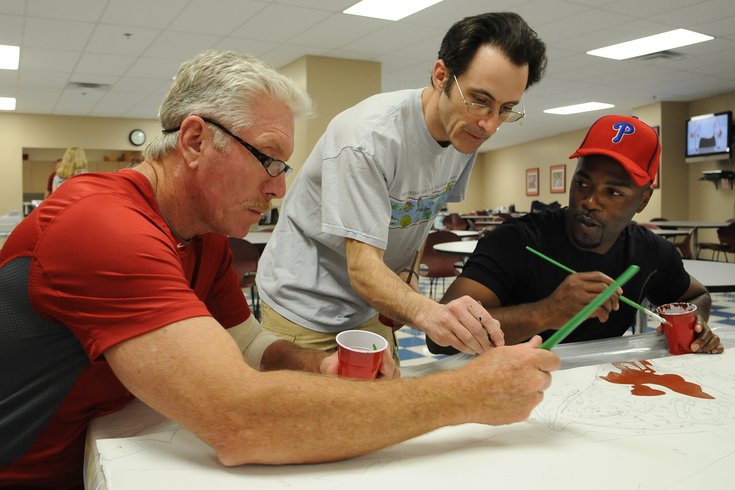 David McShane had a moment of introspection last Saturday.

Flanking him on stage at the dedication ceremony that afternoon for his latest mural were Phillies idol Mike Schmidt and "Whiz Kid" Curt Simmons. In front of McShane, meanwhile, was a crowd of 400 people -- a horde of onlookers not just angling their heads for a look at the mural he'd created, he realized, but for a look at him.

I did it, he thought.

Because, frankly, not every mural unveiling feels so glamorous.

"I go from project to project and don't often get to take it all in when it's done, but it was hard not to at that dedication," McShane told PhillyVoice. "That moment, I was able to take it in and say, ‘Wow, we did something big here.' Looking over at an eight-story building and seeing a colorful image that captures a lot of memories for people. ... That’s a nice feeling to have."

The Phillies Mural, theoretically in the works since the Phillies won the World Series in 2008, is the longest mural project McShane has worked on since first tackling the North Philadelphia Tribute to Jackie Robinson Mural in 1997. It's also a major cultural accomplishment for someone who knows the mural will delight Phillies fans (and taunt critics) for decades to come.

McShane, a Phillies fan practically since conception, first started painting with his twin brother when he was a child. Two of eight kids growing up in Audubon, Camden County, with a dad who was a plumber and a mother who stayed at home to raise her children, their art-making came from a place of busy-keeping and resourcefulness until it blossomed later on in life -- first in high school, when McShane's art teacher let him paint murals in the school, and again when he stepped out of La Salle University with a bachelor's degree in pre-med but a lingering itch for art.

From there, he took his talent to the Pennsylvania Academy of the Fine Arts and, still a Phillies fan, continued making baseball paintings in his spare time. When the opportunity for the Robinson mural surfaced with the Mural Arts Program, he used those pieces as showcases and has since made a whole slew of sports murals citywide.

But as humbling as the Robinson mural was, nothing compared to making the Mural Arts Program's Phillies Mural.

"This was a real dream project for me," he said. 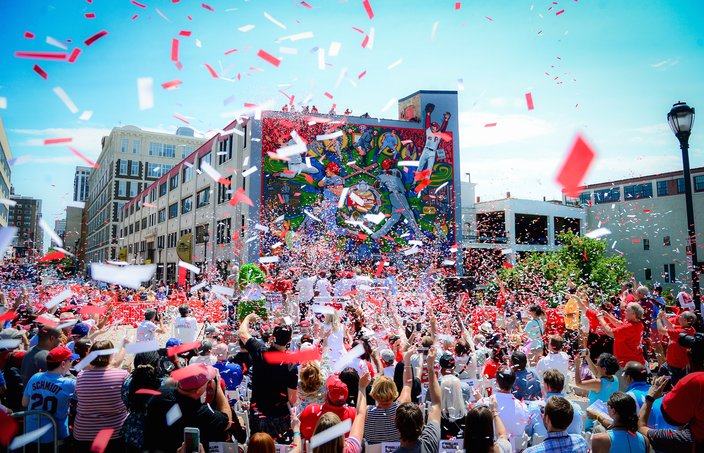 McShane spent the past six years working hard and nerding out over the mural, which covers eight stories of a 24th and Walnut streets building and overlooks the Schuylkill River. It was an elongated process of painting, obtaining permission to use the eight-story wall and getting feedback from fans and players.

But it almost wasn't so.

"Jane [Golden] knew I was passionate about sports, and after the Phillies won the World Series in 2008, we decided to do a mural. And it was initially going to be just a small thing to kick off the beginning of the next season -- to have the mural of the Phillies winning the World Series," he said. "But I was like, ‘Man, we’ve only won two World Series in their history -- we should do something big, not small.’"

And it sure is big.

Beyond being large in the physical sense (it spans 3,750 square feet), the mural -- with colors that "pop" from across the river, he said -- depicts 30 players and encompasses about six decades of Phillies history. Everyone from Shane Victorino to Johnny Callison and Cole Hamels to the "Whiz Kids" is represented.

"What I was going for was a sense of nostalgia, and I think anybody that’s really into baseball realizes there's a way in which baseball parallels American history or what’s been going on in America -- it can reflect the good and the bad," he said. "There are racial issues that happened during the civil rights era in the ‘60s, and Dick Allen in the mural reflects that."

It is, he said, both a mark of history and a means of eliciting "Remember when?" moments between people who might otherwise have nothing in common. 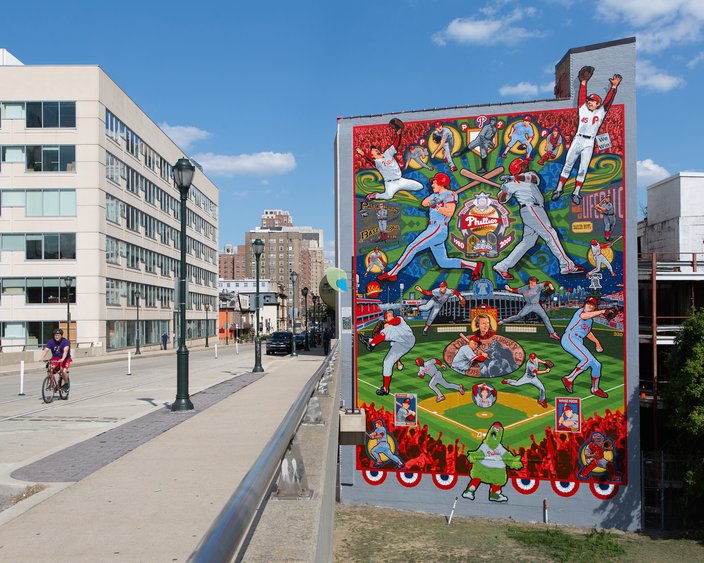 In short, the mural is tailor-made for those fans who (with love) make jabs at the water cooler or high-five after a home run. It won't bring everyone together, he acknowledged -- certainly, not every car driving by it on I-76 will house a sports fan -- but its value is in the diversity it adds to the city's immense collection -- and continuously solid reputation -- for murals.

"You might go to a gallery and not love Jasper Johns or love an abstract, but it's at least out there for people with whom this subject matter resonates," he said. "And, if they don’t like it, they can boo. Which, as we know," -- he said tongue-in-cheek -- "is every Philadelphian’s right."

Next up for McShane is the restoration of the Dirty Franks mural next week, which involves the lofty challenge of adding Pope Francis -- er, "Pope Frank" -- to the wall's iconic (and growing) list of famous Franks.

He hopes to bring that same strike-a-pose characterization from his Phillies Mural to his portrayal of "Pope Frank."

"Like with the baseball mural, I like to capture the pose of a person or them wearing something that speaks to who they are," he said. "For this, I'm thinking [the pope] has all these pictures with his hand up in a wave, and a sign of the cross, and his pinky sticks out in a funny kind of way. My vision is to have his hand up blessing people, but with the hat on."

And it's how McShane next explains his pope-hat-painting decision that makes it crystal clear why he's just the guy to portray characters -- sports or otherwise -- in murals so authentically "Philly."

"The hat, it's such an iconic thing -- there’s only one guy who gets to wear a hat like that," he explained, as if to give a healthy dose of straight talk. "It's like his way of saying he’s the big mahoff.”