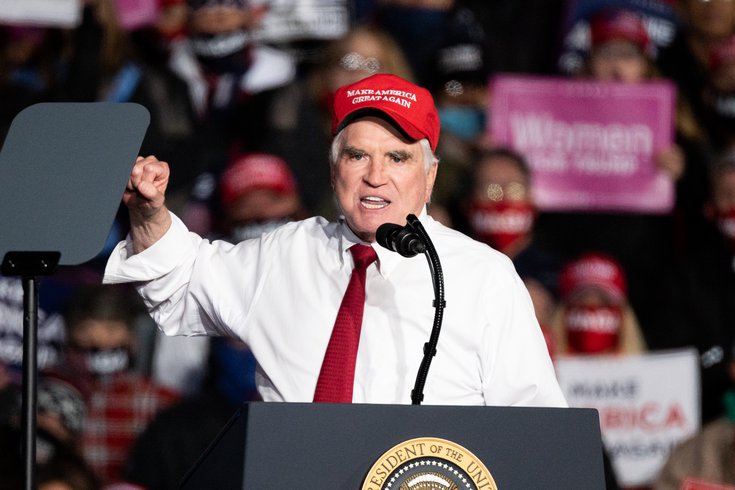 Pennsylvania Rep. Mike Kelly, pictured above speaking at a Trump campaign rally in October, filed an emergency petition with the U.S. Supreme Court on Tuesday.

Pennsylvania Rep. Mike Kelly and other Republican politicians are continuing their efforts to contest Joe Biden's projected win of the 2020 presidential election.

Kelly submitted an emergency petition Tuesday to the U.S. Supreme Court asking justices to nullify the results of the election in Pennsylvania, even though they were already certified by state officials including Gov. Tom Wolf on Nov. 24.

The petition asks the Supreme Court to throw out this certification in light of mail-in ballot legislation that was passed in October 2019, which Kelly is also challenging.

In the same filing, Kelly also asked the Supreme Court to hear an appeal of his challenge to the "no-excuse" absentee ballot legislation, since the Pennsylvania's Supreme Court dismissed the challenge last week.

The highest court in the state dismissed the challenge on the grounds that it was not submitted in a timely manner.

Kelly's petition will now be submitted to Supreme Court Justice Samuel Alito, who has jurisdiction over Pennsylvania and is expected to refer it to the whole court, reported CNN.

Critics say that Kelly's emergency petition is unlikely to be heard, as the issue at hand is a matter of states' rights. The initial challenge by Kelly and others, including Republican congressional candidate Sean Parnell, argues that the absentee ballot legislation violates the Pennsylvania Constitution as well as the U.S. Constitution.

Parnell, who ran for office in Pennsylvania's 17th congressional district, has refused to concede to incumbent U.S. Rep. Conor Lamb. Lamb has declared victory, and the AP called the race in his favor last month.

The recent legal action is one of many by Trump's legal team and other Republican legislators seeking to challenge the results of the 2020 election. Most of the lawsuits have been dismissed or withdrawn.

Kelly and Parnell received support from Texas Sen. Ted Cruz on Twitter, who said "#SCOTUS should hear the emergency appeal on the Pennsylvania election challenge," in a statement published Tuesday.

#SCOTUS should hear the emergency appeal on the Pennsylvania election challenge. pic.twitter.com/mzwr4eaHR8