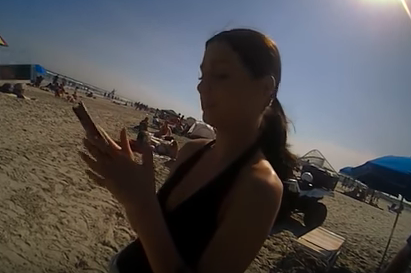 Emily Weinman was arrested by two seasonal police officers in Wildwood on May 26, 2018. She filed a federal civil lawsuit alleging police used excessive force and fabricated evidence against her. In a settlement, she will receive $325,000.

A Philadelphia woman whose arrest on a Wildwood beach went viral two years ago has reached a $325,000 settlement with the Jersey Shore city, which had been sued over claims that two seasonal police officers used excessive force against her.

Emily Weinman filed the federal civil lawsuit last year after she accepted a plea deal in the infamous episode on May 26, 2018.

Weinman, who was 20 at the time of the incident, alleged she was assaulted after she refused to provide her last name to two Class II seasonal officers, who had stopped at her beach blanket after observing unopened bottles of Twisted Tea propped against a cooler. Weinman was on the beach with her 18-month-old daughter and a female friend.

Bystander video of the incident went viral, initially prompting outrage over the forceful manner in which Weinman was arrested. She had been suspected of underage drinking, but passed a breathalyzer test and explained to the two officers that the alcohol belonged to her aunt.

The officers claimed Weinman became combative during the encounter. She was accused of spitting at the officers and kicking one of them in the genitalia. The lawsuit disputed those claims, alleging Wildwood police fabricated evidence against her and exaggerated her resistance.

During the dramatic arrest, one of the officers could be heard saying, "Alright, you're going to get dropped," before Weinman was taken to the ground.

Wildwood police later released body camera footage of the arrest and identified the two officers as Thomas Cannon and Robert Jordan. Cape May County prosecutors declined to press charges against either officer.

Weinman, who was accused of spitting at the officers, was charged with two counts of aggravated assault, throwing bodily fluids, resisting arrest, disorderly conduct, and obstruction of justice, among other offenses. She initially pleaded not guilty, but later took a plea deal on one charge of disorderly conduct. She was banned from Wildwood for one year.

The settlement reportedly was approved by the Atlantic County Municipal Joint Insurance Fund, which represents several municipalities in South Jersey according to NJ Advance Media.

Cannon and Jordan were dismissed from the federal lawsuit in advance of the settlement.

In the wake of the incident, Weinman appeared on "Good Morning America" in an attempt to clear her reputation. She denied allegations made by the officers and said the incident had became emotionally distressing for her.

"I've been real anxious over it. Kind of upset, just, the negative things people say about me," Weinman said. "You know, they see one video, one situation, and they're like saying all this negative stuff about a person. But, one situation doesn't define someone. I'm not a bad person. I'm not this person that they're out here trying to make me seem like."