Three officers, including the two arresting officers, and the City of Wildwood were named in the civil rights lawsuit 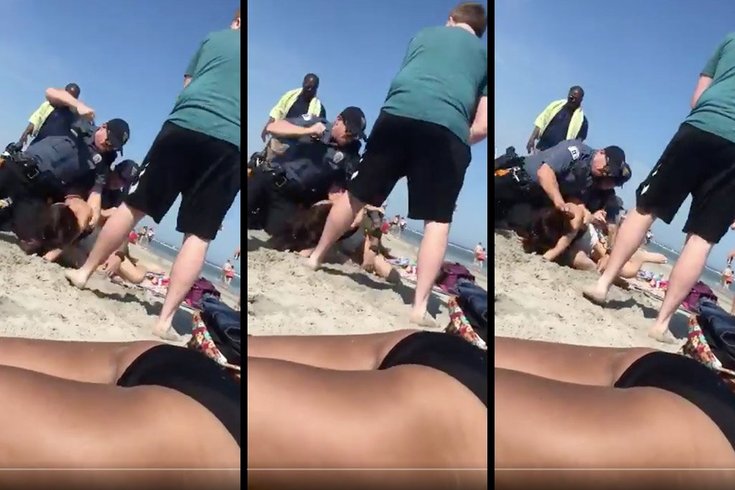 Emily Weinman, of Philadelphia, has filed a federal civil rights lawsuit against the two Wildwood police officers who arrested her on the beach during Memorial Day weekend 2018.

The Philadelphia woman who was arrested on the Wildwood beach filed a federal lawsuit, claiming she was "senselessly assaulted" by the two officers who took her into custody during Memorial Day weekend 2018.

Emily Weinman's civil rights lawsuit names as defedants the two cops involved in her arrest, officers Thomas Cannon and Robert Jordan, as well as Wildwood police Lt. Kenneth Gallagher and the city of Wildwood. The complaint was filed in U.S. District Court in Camden on Monday.

According to court documents, Weinman, 22 years old, from the city's Kensington neighborhood, alleges she was assaulted after she refused to provide her last name to officers Cannon and Jordan, who had stopped at Weinman's beach blanket after seeing unopened bottles of Twisted Tea propped against a cooler. Weinman was on the beach with her 18-month-old daughter.

Weinman says that Cannon falsely reported that she kicked Jordan in the genitalia and struck Cannon, court documents state. She and her attorney's also describe the officers pushing Weinman's face in the sand, pulling her hair, twisting her arms, and choking and punching her.

The lawsuit further claims Lt. Kenneth Gallagher delivered a false testimony to the grand jury, based on the arresting officers' claims, which resulted in additional charges against Weinman.

She pleaded guilty in February to one count of disorderly conduct and all other charges were dropped. She had pleaded not guilty to multiple charges, including aggravated assault and resisting arrest, in November.

Cannon and Jordan were cleared of any wrong doing after an investigation by the Cape May County Prosecutor's Office.

Before she was arrested, Weinman had passed a breathalyzer test and told the officers that the alcohol belonged to her aunt, according to body cam video released by Wildwood police.

Weinman's lawyers write in the lawsuit that the whole incident could have been avoided if the police had confiscated and disposed of the alcohol and moved on.

Attorneys for the police and Wildwood have not yet responded to the Weinman's complaint.