The vice president spoke about school choice, but outside St. Francis de Sales, attention was on other issues 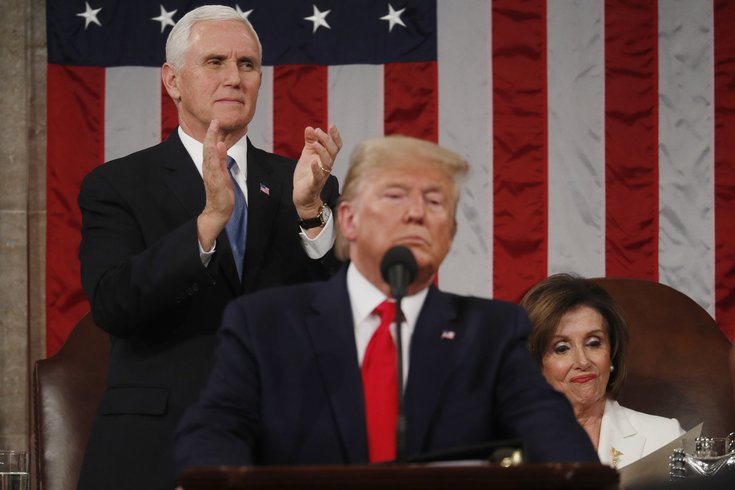 Vice President Mike Pence was greeted in West Philly on Wednesday by demonstrators representing the LGBTQ community, refugees, and building trades workers, as he arrived at St. Francis de Sales School to talk about school choice.

The visit follows Tuesday night's State of the Union address, at which President Donald Trump hosted Janiyah Davis, a fourth-grader from Philadelphia. Trump advocated for school choice programs, specifically a federal one that would provide tax credits for contributions to private schools' scholarship funds.

And during his speech, the president announced Davis would receive an "opportunity scholarship" to attend a private school. It was later revealed that U.S. Secretary of Education Besty DeVos had donated her salary to fund Davis' scholarship.

Both Pence, during his trip to St. Francis de Sales, and Trump, before congress, said in their respective speeches that "No child should be forced to go to a failing government school."

"Why would the Commonwealth allow for the expansion of the Education Investment Tax Credit that supports private institutions while our current public-school system remains underfunded?" Wolf said at the time. "We have public schools that are structurally deteriorating, contaminated by lead, and staffed by teachers who are not appropriately paid and overstretched in their responsibilities. Tackling these challenges, and others, should be our collective priority.

LGBTQ groups have opposed the Pence's opinion that "homosexuality is a choice," and his calls for government funding for conversion therapy.

Hundreds of us have shown up to tell @Mike_Pence he is not welcome in west Philadelphia. pic.twitter.com/GUM00ZMo15

Amid VP Mike Pence visit, #westphilly #protest to show support for #refugees and the #lgbt community.

No Pence. No KKK. No fascist USA. #mikepence #mikepencephiladelphia #mikepencevisit

Members of the Steamfitters Local 420 gathered their own group of protestors at Clark Park before heading over to de Sales. Union members called attention to the job loss from the shuttered Philadelphia Energy Solutions, whose land was just sold to a Chicago warehouse company. Local 420 and other union laborers want the property to remain a refinery, which the White House has already said it supports.

Fresh from Tuesday night's pep rally, er #stateoftheunion address on Capitol Hill, @mikepence is clogging up West Philly streets pushing the school choice agenda. The choice you don't have is to drive anywhere near this area for the next few hours. #why #mikepence #schoolchoice #Philadelphia #gentrification #keepitmoving