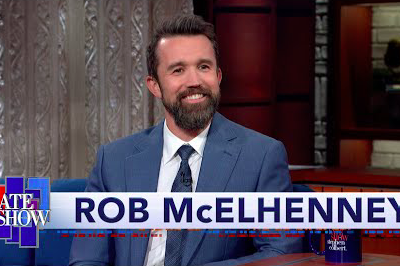 Rob McElhenney, creator of "It's Always Sunny in Philadelphia," joined "The Late Show with Stephen Colbert" to talk about his family, Danny DeVito and his new Apple TV series, "Mythic Quest: Raven's Banquet."

What would "It's Always Sunny in Philadelphia" be without Danny DeVito?

Probably a show that got canceled after one season, according to series creator Rob McElhenney.

In an appearance this week on "The Late Show with Stephen Colbert," McElhenney talked about the early days of the long-running series, which aired its 14th season last fall.

When the show first debuted on FX in 2005, the fledgling network lacked a significant marketing budget. The series starred McElhenney, Charlie Day, Kaitlin Olsen and Glenn Howerton. At its 10 p.m. time slot, the show didn't get much in the way of viewership.

"We love the show. We want it to succeed," Landgraf told McElhenney. "So we want to add maybe an actor that has a little bit of cachet. Somebody that can bring some exposure to the show."

"We said no," McElhenney told Colbert. "I said, 'No thank you. We don't want Danny DeVito'. I said, 'It's nothing personal against Danny DeVito. I grew up watching Danny. He's a legend and he's incredibly funny and we love him.' But we felt we had something really special and we really thought maybe bringing a movie star on would ruin the chemistry."

In response, Landgraf said he'd go ahead and cancel the show.

"I was like, 'Get me Danny DeVito,'" McElhenney said. "'As quickly as possible.' The only thing more important than chemistry on a TV show is the TV show."

Fifteen years later, it's impossible to imagine the Gang without Frank Reynolds.

McElhenney recently said he'd love to continue making "It's Always Sunny in Philadelphia" for as long as he can. The series is poised to become the longest-running, live action sitcom in American television history after its 15th season is complete.

For now, McElhenney is getting ready to premiere his new Apple TV show, "Mythic Quest: Raven's Banquet," which debuts Friday.