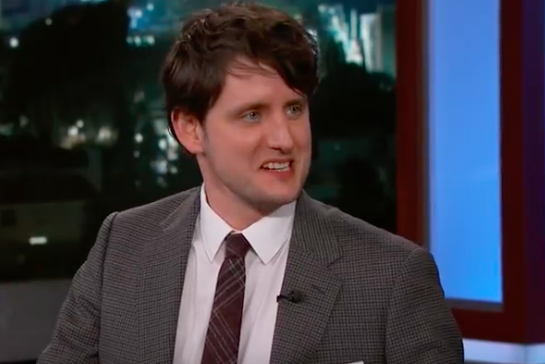 During an appearance on 'Jimmy Kimmel Live!,' Yardley native and 'Silicon Valley' star Zach Woods talked about the local reenactment of George Washington crossing the Delaware River to fight Hessian mercenaries on Christmas 1776.

HBO's "Silicon Valley" came to a close earlier this year after five seasons of satire infused with the eccentric humor of creator Mike Judge.

The most memorable character in the series arguably is Jared Dunn, the COO of Pied Piper, whose lamb-like derangement was flawlessly rendered by Zach Woods.

Woods, 35, is a native of Yardley, Bucks County. His public personality is actually not very far from Jared's, which may explain why he was a natural for the role.

Earlier this week, Woods was a guest on "Jimmy Kimmel Live!" to discuss his work in the upcoming HBO sci-fi series "Avenue 5."

When Woods told Kimmel he was from Yardley, it prompted a few unlikely cheers of approval from the studio audience. That led Woods into a discussion of his hometown and the locally famed Washington Crossing Christmas reenactment that occurs a few miles away on the Delaware River.

The annual tradition recreates the scene of George Washington crossing the Delaware River to fight Hessian mercenaries in Trenton, New Jersey on Christmas 1776.

"They're very stringent about the standards of historical authenticity," Woods said. "So I went one year, and when you drive by you see these guys who have been rejected because they're not authentic enough. You'll see all these guys who are wearing, like, deerskin frocks, and have muskets, but they're wearing New Balance sneakers. And they're just sadly checking their phones on the side."

Woods also joked about the contingency plans in place for when the river is frozen.

"If the river is frozen, they don't go across the river," Woods said. "They just carry a boat across a bridge, which I think is a little bit of a copout."

Woods usually can be counted on to make some kind of local reference during his late night TV appearances.

A few years ago, he regaled Conan O' Brien with the story of the Bucks County "bread molester" who used to dig his fingers into bagged loaves of bread at local grocery stores.

But Woods also has gotten himself in trouble when talking about his local roots. He once referred to Philly as "kind of a racist city" and mistakenly chided Flyers fans for "throwing batteries at Santa Claus" during an appearance on Marc Maron's "WTF" podcast.

Woods later apologized for those remarks and said he was attempting to be lighthearted.

Kimmel asked Woods whether he would ever consider taking the role of George Washington in the Christmas crossing.