Contestants on Netflix's 'The Circle' try to pronounce Conshohocken 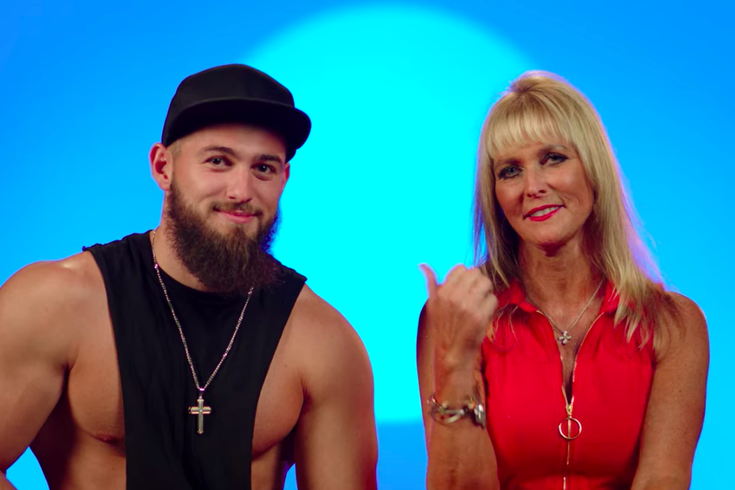 Meet Ed and Tammy from Conshohocken, Pennsylvania. The son and mother are new contestants on Netflix's 'The Circle.'

If you haven't started "The Circle" on Netflix yet, you're missing out on some quality reality TV. The show is essentially "Big Brother" meets "Catfish," with a dash of "Black Mirror" thrown in, and it's is all about appearing cool on social media.

Contestants live in individual apartments within one building and communicate to each other through a voice activated social media platform. Everyone's trying to win the $100,000 prize by putting their best profile forward, whether it's an authentic representation of themselves or a carefully fabricated lie.

And while it may sound like it would be boring to watch people trapped alone in tiny rooms talk to their TVs, it's somehow not.

Contestants are challenged to rank each other and make eliminations. Once a player is out, "The Circle" brings in another player to fill the empty spot.

The first four episodes were released on the streaming platform on Jan. 1, and the next four made their debut Wednesday.

In Episode 8, we meet the newest player who (SPOILERS AHEAD) is a bro from Conshohocken, located right outside Philly in Montgomery County.

Ed Eason joins the cast and brings his mom with him (more on that later), and introduces the world to the Conshy accent.

Sammie, Joey, Chris and Shubham, all portraying their true selfs, as well as Seaburn who is posing as his IRL girlfriend Rebecca have been in the game since the beginning. There's also Bill, playing as himself; Alex, posing as "Adam" by using photoshopped pictures of himself; and Sean, who is using pictures of a different woman for her profile.

When Ed enters the group chat, Sammie asks where he's from and viewers are treated to a segment of the players attempting and failing to pronounce Conshohocken.

After learning this, Sammie reveals she also has local ties. She went to Cabrini University in Radnor, Delaware County.

Ed throws a "youse" into the convo, too, presumably to prove he's who he says he is.

In his intro montage for "The Circle," Ed tells the camera, "When people first meet me they probably think I'm just an ass****, because it's kind of just what I look like."

He follows that with, "I like to party. I like drinking beer. I'm a goofball. I love women and I'm ready to tear up 'The Circle.'"

Do with that information as you will, but let's get back to the mom in the room. Tammy Eason is a real estate agent and uses the word "emojo" when trying to say emoji. To be clear, that's not a Conshohocken thing. That's a Tammy thing.

As the show explains, everyone gets to bring one thing to "The Circle." Joey brought moisturizer, which is understandable. It's 2020 and while he looks and sounds like someone from another great reality TV show, "Jersey Shore," he knows skincare is important, not tanning.

Sweet Shubham brought ping-pong, which also kind of makes sense. The game keeps him occupied while he waits for a DM, but who does he play against? The wall? A cameraperson?

So far, unclear exactly why Ed brought his mother along. Perhaps to keep him in check?

When Ed sends a private message to Sammie later on in the episode, Tammy tells him not to use "hon" or "babe" yet. Sammie then reveals she's originally from Delaware County and Ed tells his mom, "Delco chicks are crazy."

We'll have to wait for the next four episodes, coming Wednesday, Jan. 15, to see if Sammie and Ed become friends or not – and if they stay or get eliminated.