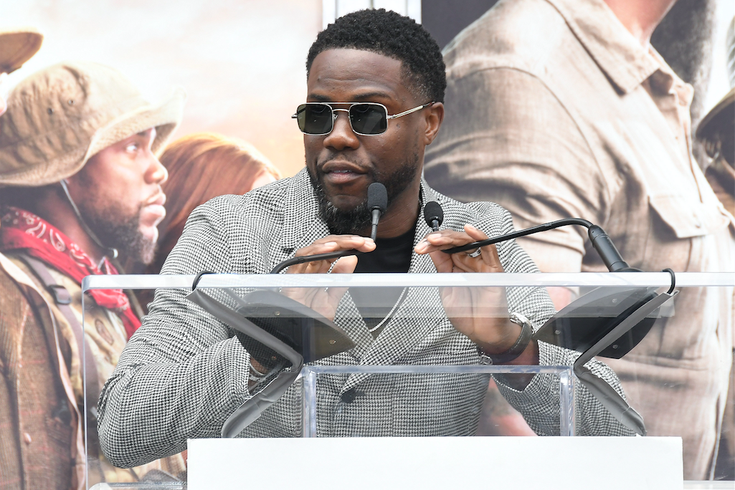 Kevin Hart's "Don't F*ck This Up" docuseries on Netflix has the comedian's fans divided over the way he's conducted his relationships.

With the release of his new Netflix docuseries "Don't F*ck This Up," comedian Kevin Hart sought to make amends for several controversies in recent years, from cheating on his wife to the homophobic tweets that led to him stepping down as host of the Oscars in 2018.

The North Philly native may have accomplished the opposite after one scene ignited outrage at his behavior toward a staff member.

At one point in the docuseries, Hart gets into an argument about money with his personal trainer, Ron Everline, while the comedian and his team are on a private jet. Hart implies Everline couldn't survive without him. He goes as far as to repeatedly prod Everline to into admitting he doesn't have his own home. The two almost came to blows.

I saw this video of Kevin Hart talking down to his trainer yesterday and it has been bothering my spirit ever since. I don't care where you come from or what anyone has done for you, absolutely no-one has a right to speak to you like this. pic.twitter.com/Eef2PAcdZG

Later in the series, Hart explained that he was frustrated at the time of the argument because another friend of his, Jonathan "J.T." Jackson, tried to extort him over the sex tape scandal he had with model Montia Sabbag in 2017. An extortion charge against Jackson was dropped late last year.

Still, the fight with Everline looks and sounds horrible — whether it's in or out of context. For including it in the series, Hart actually deserves some credit for exposing the rot of an inflated ego. The tone he struck in the argument — the fact that he's capable of being that kind of wealth-corrupted celebrity — didn't sit well with some of his fans.

this documentary made me lose so much respect for Kevin Hart. He is genuinely an asshole. I don’t care if you drunk or not, you do not have to talk to someone like that. “Without me, would you have a house?!” Like wtf? He lucky his trainer didn’t beat tf outta him. https://t.co/CfqKoAPk4f

I saw this video of Kevin Hart talking down to his trainer yesterday and it has been bothering my spirit ever since. I don't care where you come from or what anyone has done for you, absolutely no-one has a right to speak to you like this. pic.twitter.com/Eef2PAcdZG

I like Kevin Hart. No one is without imperfections, so I understand he’s going to make mistakes.

However #DontFkThisUp kind of showed what an egomaniac he is.

The scene with his trainer made me turn it off. I had to wait a day to finish it bc I met my limit.

Kevin Hart was outta line for arguing with his trainer like that. He violated

Kevin hart documentary was so good man. Hated that he flexed on his trainer but other than that he a good dude

With "Don't F*ck This Up," Hart clearly wanted to showcase both the good and the bad in his life. The series adds a candid layer of behind-the-scenes complexity to events that might have derailed another celebrity's career, marriage and friendships.

The reality is that Hart and Everline reconciled their differences and remain close. The last anyone looked, "Jumanji: The Next Level" debuted atop the box office. He's doing fine.

This was the kind of ugly moment that should make anyone who talks down to others re-evaluate what gives them the right and the excuse. It's not money and it's not alcohol.

Some of Hart's fans were more understanding of his conduct during the fight with Everline.

so after watching the @KevinHart4real doc the next day all i notice was people talking about how Kevin and his trainer got into it. Is that all you got from the doc???

Bye. If y’all WATCH the documentary y’all would see that Kevin hart not only apologized, but too full responsibility for what went down that night. Him and his trainer are tight they moved right past that shit. Watch the fucking show n stfu. Y’all moms act like Kevin sooo https://t.co/wXi4IoTrgp

If you're too sensitive about the delivery u gonna miss a lot of the message.

Wealth and fame aside, Hart had a rough end to the last decade after suffering serious back injuries in a car crash. For as much as he does in front of the camera and on the stage, his personal life has been packed with drama. Hell, even the gaming apps he inspires lead to lawsuits as a result of that drama.

The question fans should ask after this documentary is whether Hart, who's now 40 years old, genuinely learned from these experiences or if they were just for show. His natural humor and charisma, his underlying humility and self-deprecation, despite so many bad looks, are what carried him this far. The fastest way for him to f*ck it up would be to define his well-earned success in terms of wealth rather than character.