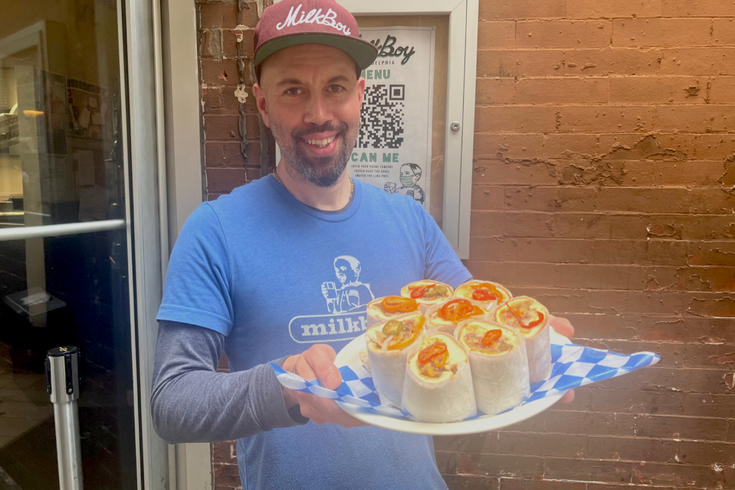 MilkBoy will be serving limited edition "Red October Cheesesteaks" during each World Series game in honor of the Phillies. Above, MilkBoy's Chef Yun Fuentes poses with a tray of the 24-inch sandwich that is cut into 8 pieces for easy sharing.

There's hardly anything more quintessentially "Philadelphia" than a cheesesteak, so it only makes sense to enjoy them during the Phillies' exciting World Series run.

Chef Yun Fuentes, Culinary Director of popular restaurant destination MilkBoy, has unveiled a new line of cheesesteaks at the restaurant, which includes the Red October Cheesesteak, inspired by the Phillies playoff run. The limited edition sandwich will be available at MilkBoy Philly, at 11th and Chestnut streets, and MilkBoy South Street, Fourth and South streets, only during World Series games.

MORE: Say 'cheers' to the Phillies with red beer at McGillin's during the World Series

For $25, patrons can enjoy the Red October Cheesesteak, topped with long hot aioli, provolone, and pickled jalapeños. The massive sandwich, which was officially unveiled on Friday, is cut into 8 pieces to facilitate game day sharing.

Those who want to try the limited edition sandwich should head to a MilkBoy location when the Phillies take on the Astros in games scheduled for Monday, Tuesday, Wednesday, Friday and Saturday (as needed).

MilkBoy Philly and MilkBoy South Street also have drink specials available for fans watching the game at either location.

Patrons who head to MilkBoy on days when the World Series isn't on can try its variety of other cheesesteak options. The restaurant's new "Signature Philly Cheesesteak" is made with ribeye beef, sharp American cheese, fried onions and “Tommy sauce” served on a Liscio's Bakery seeded roll. MilkBoy also serves a Chicken Cheesesteak and a Cauliflower Cheesesteak.

On game days, after enjoying a Red October Cheesesteak at MilkBoy, fans can wander over to McGillin's to wash it down with some celebratory Phillies-themed red beer.