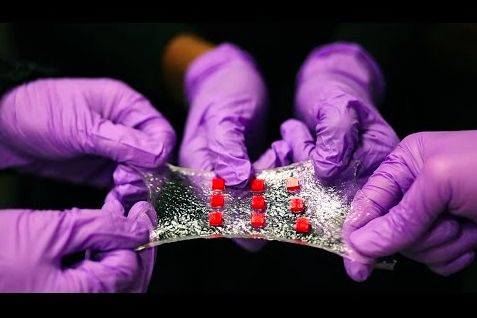 A team of researchers at the Massachusetts Institute of Technology is aiming to create the Band-Aid of the future after successfully developing a hydrogel material that can use embedded sensors to monitor bodily conditions and prompt the delivery of drugs to a wound.

The basic formula for the Band-Aid – cotton gauze and crinoline on an adhesive strip – has remained largely the same despite spectacular advances in medicine over the past century. In recent years, researchers have developed promising technologies such as nanofiber meshes that fight bacterial infections and injectable gels that stop bleeding within 15 seconds, but the latest bandage from MIT could prove effective in a variety of medical applications, Newsweek reports.

The team at MIT, led by Xuanhe Zhao of the Department of Mechanical Engineering, has created a stretchable, absorbent polymer that incorporates electronic sensors to monitor body temperature and other vital signs. The goal is to create a "smart wound dressing" with a reservoir of drugs that will be controlled by the sensors to achieve optimal treatment.

Zhao's first step was to create a durable synthetic material as flexible as human tissue that can be spread across and wrapped around wounds on various parts of the body.

In the future, however, Zhao envisions internal uses for the hyrdogel matrix. If the researchers can achieve a sufficient level of biocompatibility, the technology could be used to direct neural probes to the brain or insert a glucose sensor in the body to spare those with diabetes from have to prick themselves with a needle throughout the day.

In the video below, Zhao demonstrates the flexibility of the hydrogel and explains further how it can be used for medical purposes.