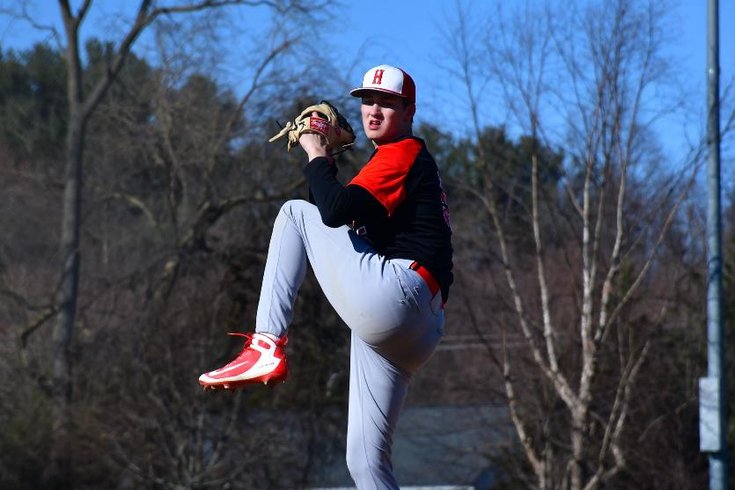 Photos courtesy of the Kochanowicz family /for PhillyVoice

Jack Kochanowicz will likely have his name called by an MLB team in June.

Jack Kochanowicz was awakened from a sound sleep around 2:30 Tuesday morning, groping in the dark for his cell phone on his night table next to his bed.

On the other end was the 6-foot-6, 225-pound Harriton pitcher’s agent, Jeremy Fikac, with a proposal for him: Would Kochanowicz be willing to accept the amount the Los Angeles Angels were offering if they selected him with the 92nd overall pick in the third round of Major League Baseball’s First-Year Player Draft later Tuesday afternoon?

So far, it’s the best wake-up call Kochanowicz, who turned 18 on Dec. 22, has received in his young life. And he still had to go to school for a senior project presentation later that morning.

On Tuesday night, the Angels made it official, calling Kochanowicz’s name with their first choice in the third round, and the 92nd overall pick.

“It was like a life-long dream coming true with a single phone call,” Kochanowicz said. “It was a little overwhelming, it was awesome. My agent called and asked, ‘The Angels’ GM is offering this, are we saying yes or no?’ I said, ‘Yes,’ and he said I was going to be picked (later Tuesday night) by the Angels.

“I was asleep when the call came. I knew the call would come. It’s why I kept my cell on. My sister Nina was kind of freaking out. I was trying to grasp in my own head what was going on. It took me a few minutes to set in what was actually happening. I spoke to my parents about it. I was pretty certain that I would take the Angels’ offer.

“It took me an hour to get back to sleep.”

There was one catch to the good news Kochanowicz heard on Tuesday morning: He couldn’t tell anyone until the Angels called his name.

So Kochanowicz, who posted a 6-0 record with 79 strikeouts over 45 innings pitched, walking 11 and surrendering 10 hits this past season, had to keep a lid on it walking through the Harriton halls Tuesday afternoon.

“I hadn’t been picked yet, and I couldn’t say anything to anyone,” Kochanowicz said. “No one wanted to get too personal and ask what was going on. I presented the project Tuesday morning. I felt great. It was easy to get through the project."

The hurler will leave for L.A. mid-week next week where he will meet an Angels team physician and sign his contract. He will be assigned to Tempe (rookie ball) where he will begin his pro career. He'll take a month to acclimate himself with the Angels throwing program and minor league life, before he starts to throw.

Kochanowicz, who received the official call from Angels’ Pennsylvania scouting director Kennard Jones Tuesday night, will be assigned to the Angels’ rookie league teams in either Omen, Utah, or Tempe.

“I’ll be out there working out, learning and getting into the system,” Kochanowicz said. “I can’t wait to get out there. I got a chance to walk with my graduating class Wednesday night. By then, everyone knew. I could talk about it. It was pretty cool. Both the class president and class salutatorian mentioned me in their speeches.”

Earlier on Wednesday, Kochanowicz had a tough act. He had committed to Virginia and had strong intentions of going to Virginia. But when the Angels came in with their offer, Kochanowicz knew immediately his dream of being as major leaguer was going to start right then and there.

But first, he had to call Virginia pitching coach Karl Kuhn personally to let him know he would be signing with the Angels.

“That was tough,” Kochanowicz admitted. “It’s a great school. Virginia will always have a piece of my heart. Coach Kuhn was very supportive and it’s something I really appreciate. I made the call Wednesday, because I wanted Tuesday and celebrate with my family.

“After making the call to coach Kuhn, that’s when it really sunk in that I was going to be a Los Angeles Angel. I owed Virginia and coach Kuhn the respect of that phone call. I really didn’t know how it would go, but coach Kuhn was great. He was nothing but positive. After that, it felt a little more real.

“It’s going to be a long process to get to the big leagues. I know that. Once I heard my name called, it was a big relief. It’s real world now.”

Chris Newell, Malvern Prep, St. Louis Cardinals: The 6-foot-2, 190-pound outfielder hit .411 with 12 doubles, eight home runs and 31 RBIs this season was chosen in the 37th round, 1,115th overall. He’s committed to Virginia, where he’s stated he’ll attend in the fall, electing not to sign with the Cardinals.

Cade Hunter, Lenape, Colorado Rockies: The 6-foot-2, 190-pound catcher is the son of Seattle Mariners scouting director Scott Hunter and was drafted in 35th round, 1,059th overall. He’s committed to Virginia Tech. He bats left and throws right. He hit .463 with six doubles and four triples this season, with eight home runs, while scoring 15 runs and picking up 31 RBIs.