If the Phillies are going to spend, shouldn't they spend on the best? 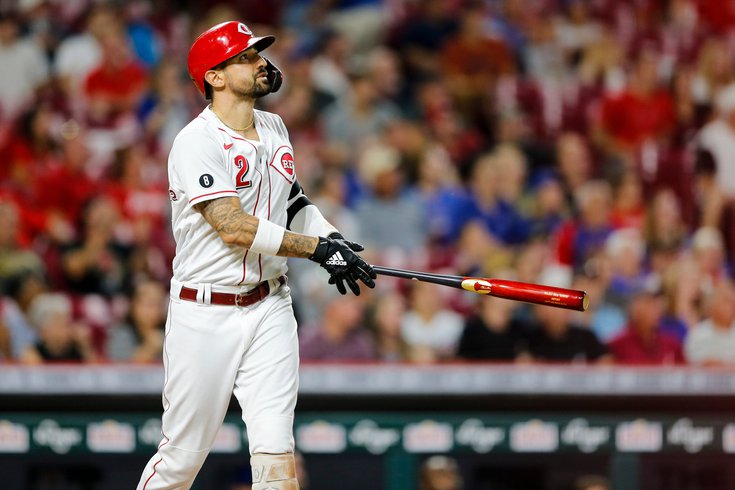 The Phillies are in hot pursuit of outfielder Nick Castellanos.

The Inquirer's Scott Lauber reported Friday that the Phillies have at least talked to Tampa about the 26-year old outfielder, though it's not clear if that will lead anywhere.

#Phillies have also talked to Tampa Bay about LF Austin Meadows, according to a major-league source. Unclear where things stand there.

The Phillies would need to trade with Tampa to bring in Meadows, but he would come over with three more years of control until he's eligible for free agency after 2024.

UPDATE [11:15 a.m.] — The Phillies might be willing to exceed the luxury tax if it means bringing in outfielder Nick Castellanos too.

The Athletic's Jayson Stark and MLB Network's Jon Morosi are both reporting that the Phillies are in "serious pursuit" of the free-agent outfielder, with Morosi adding that the two sides are "progressing" in talks on a contract.

Castellanos would put Phillies well over tax threshold. But they appear to view him as a big enough difference maker to justify that

Castellanos could push Kyle Schwarber to DH@jonmorosi was on it

#Phillies and free agent Nick Castellanos "progressing" in talks on a contract, source confirms. Credit to @jaysonst for reporting on the Phillies' "serious pursuit" of Castellanos earlier this morning. @MLBNetwork @MLB

Castelllanos batted .309 for the Reds in 2021 with 34 home runs and a .939 OPS. Slotting him into a lineup with Bryce Harper, Rhys Hoskins, J.T. Realmuto, and the newly-added Kyle Schwarber? That'd be fearsome.

The Phillies will be playing a baseball game today, against the Tigers in Clearwater.

Whether they have finished building their team for the 2022 season, however, is subject to debate.

News trickled out Thursday that the Phillies were not only still kicking the tires on one of the three or four best guys left in free agency — outfielder Nick Castellanos — but that they were one of the final two teams the All-Star was interested in, along with the Marlins.

The Phillies likely wouldn't be able to continue their unbroken streak of complying with the luxury tax figure if they signed Castellanos — who would probably fetch something close to the $19 million or so per year they gave Kyle Schwarber. But with things winding down in free agency and spring training games underway, one must ask the most reasonable of questions: if they are going to spend, why not just go all in for Trevor Story or Carlos Correa, both still out there?

While they seem to have shopped for outfielders only, their infield could need a boost. Didi Gregorius is expected to compete with top prospect Bryson Stott for big league shortstop duties this spring. With the DH on the table, there's no reason they can't just go for broke on the best available players and let Joe Girardi make them fit in the lineup.

Correa is 27, Story is 29 and Castellanos is 30. You can see there is some more bang for the buck with the top two guys, though any would be welcome.

The NL East has gotten better, as the Mets and Braves are in an arms race to have the best roster for 2022. The Phillies could join the conversation in inking one of the three guys above. And why not go for the best of the bunch?

We'll see if anything happens today, with many expecting the team to bring in Castellanos to bolster the outfield with a power bat. Follow along all day with our live stream and open thread below: