Segura could be moved to a different position, or to a new team, according to a report from MLB Network 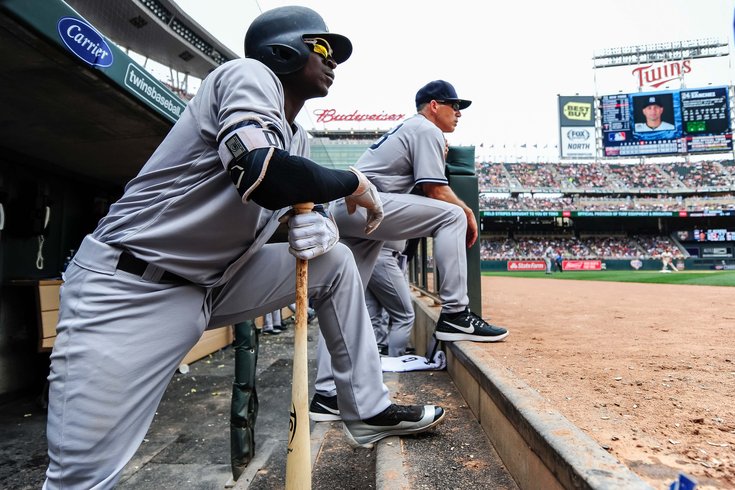 Didi Gregorius (foreground) and new Phillies manager Joe Girardi (background) have worked together before. Could they reunite in Philadelphia?

The MLB stove is officially hot, featuring a spicy rumor Friday from MLB Network's Jon Morosi: the Phillies are "pursuing" former Yankees shortstop Didi Gregorius, and are so interested in the 29-year-old that they might be willing to move on from Jean Segura:

Sources: #Phillies pursuing Didi Gregorius in free agency, as I reported on @MLBNetwork today, with the idea that Jean Segura would move to a different position or be traded. Joe Girardi managed Didi in New York, of course. @MLB

Gregorius, as Morosi points out in his report, played for new Phillies manager Joe Girardi in New York for three years, before Girardi was let go at the end of the 2017 season.

The idea that the Phillies would be ready to move on from Segura so quickly, after giving up long-ballyhooed prospect J.P. Crawford last offseason in the trade with Seattle, sure is intriguing.

Segura certainly cooled off a touch this past season, compared to his 2018 All-Star campaign, slashing .280/.323/.420 in 144 games, but his slugging percentage saw a slight bump and his on-base percentage didn't lag far behind. His stolen base count was disappointing, and he posted the lowest defensive WAR of his career, but it wasn't exactly a miserable year for the 29-year-old righty.

The Phillies' apparently aggressive pursuit of Gregorius might simply be a case of trying to acquire a better player, or grab a player who fits well within Girardi's ideal lineup. Gregorius didn't get on base as regularly as Segura, with an on-base percentage (.276) well below the Phillies shortstop's, but he hit for power in a big way, launching 16 home runs and 61 RBI in just 82 games.

If Gregorius does swap his blue pinstripes for red, Morosi leaves the door open for a Segura position change. Segura played second base in 2016 with the Diamondbacks, and had a pretty excellent season doing so. The Phillies are looking to move away from second baseman Cesar Hernandez, according to a Jayson Stark from report earlier this month, which could clear the way for Segura to slide to second and Gregorius to set up shop at shortstop.

The question, of course, is whether Segura would willingly move away from his preferred position in order to stay with the Phillies. Segura is currently under contract with the Phillies through 2022, including a club option for 2023.