Report: Phillies have a new offer in to J.T. Realmuto as they emerge as clear favorites 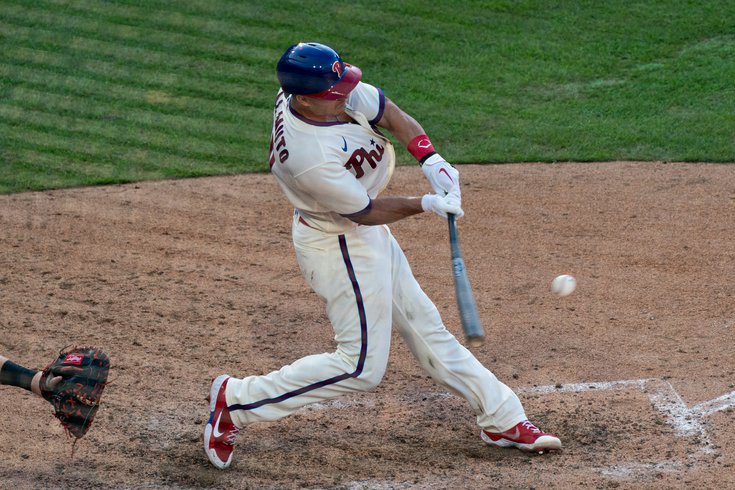 In case you've missed it the last few days, but the MLB hot stove appears to be heating up. And finally, it seems, the Phillies are ready to get involved in a real way, beyond adding relief help like Archie Bradley or inking deals with all their arbitration-eligible players.

According to The Athletic's Jayson Stark, the Phillies have a new offer in to the free agent catcher, who also happens to be the best available player on the market.

There have been conflicting reports as to whether or not the Phillies had actually made an "official" offer to Realmuto, but per Stark's reporting, the team has not only extended an offer, but it's a pretty darn good one at that.

According to an industry source familiar with the negotiations, the offer was for five years and slightly north of $100 million, which is believed to be somewhere in the range of where the club stood last March, when negotiations screeched to a halt because of MLB’s COVID-19 transactions freeze.

The Phillies’ new president of baseball operations, Dave Dombrowski, declined comment to The Athletic on Friday, saying: “We continue to have interest in J.T. But from a negotiating standpoint, these are things that have to be kept private.”

However, Dombrowski did confirm an NBC Sports Philadelphia report that he met in person with Realmuto and his wife in Oklahoma late last month. Sources say the club then followed up with its latest offer in the last week or so.  [theathletic.com]

Dombrowski told Stark that the two didn't talk money during their meeting, but that it "went great." It appears the two sides will begin talking money shortly.

While the number being thrown out there isn't quite as high as some were suggesting it would be, given Realmuto's reported demands and the amount of interested that was expected in the 29-year-old catcher, Stark says that other teams who have negotiated with Realmuto's agent believe that side still thinks he should be paid like one of the best players in the sport, not just the best catcher.

But as teams have continued to drop out of the running — the Mets signed James McCann (and Francisco Lindor), the Angels just inked Kurt Suzuki on Friday, and a day earlier the Yankees signed DJ LeMahieu — the Phillies' chances of re-signing Realmuto at a reasonable price increases. Even other teams that have reportedly been interested in the former All-Star, like the Nationals, Astros and Blue Jays seems to be fading behind the Phillies in the race to sign Realmuto. That's part of the reason Stark thinks the team's latest offer might be enough to getting it done.

It's also worth noting that Stark says that 5-years and $100-plus million is around where the two sides were last winter before COVID hit. For the Phillies to remain at that number while free agent offers have been decreasing around the league due to the simple economics of not having fans in seats should be a signal to Realmuto that the team is serious about landing him, even if it's nowhere near the $200 million some suggested it would take to get a deal done.

The Phillies’ offer is believed to be well below that amount, but increasingly, they’ve begun to position themselves as the favorite to sign the All-Star catcher, who turns 30 in March. Earlier this offseason, they were telling agents and other clubs that they expected to substantially cut payroll. But there has been less talk of that since Dombrowski’s hiring last month.

It seems telling that, from all indications, the Phillies haven’t added or aggressively pursued any other catchers this winter, even though the only veteran catcher on their big-league roster is longtime backup Andrew Knapp. Instead, they’ve patiently waited for Realmuto’s market to materialize.  [theathletic.com]

Even if the market is quite what he was expecting, it should be a big payday in store for Realmuto. Even on the low end of what Stark is reporting, it would be a five-year deal "slightly north of $100 million," meaning a minimum of $20 million per year. Only two other catchers (Joe Mauer and Buster Posey) have ever been able to claim that. And if he's still hoping to earn the highest annual salary of any catcher — Mauer currently holds that mark at $23 million per year — the two sides aren't that far off. After all, what's $15 million or so between friends?

The Phillies are reportedly still $53 million below the luxury tax threshold, as they stand at $157 million in payroll after agreeing to one-year deals with Rhys Hoskins, Vince Velasquez and Jose Alvarado on Friday. If the team was to pay Realmuto somewhere between $20-23 million, that would leave them about $25 million to address shortstop, centerfield and the rest of the bullpen and they could still stay comfortable clear of any luxe tax issues. That, however, assumes they're willing to go all the way up to the tax like they did last season.