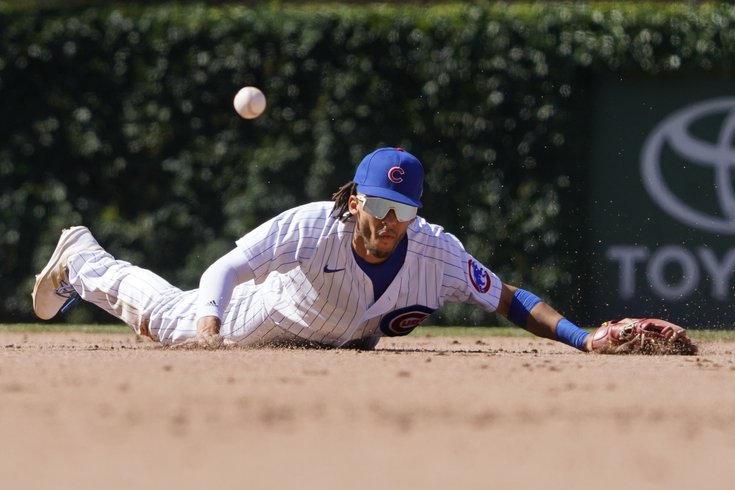 Will the Phillies add another veteran to beef up their bench?

Who won this trade is a pretty difficult assessment to make on the surface, as it strengthens and deepens a bullpen that is in the midst of getting an overhaul, but it weakens the Phillies bench and two fan favorites from the World Series run this past fall have now left town.

With Bryce Harper expected to be starting the season on the injured list, the Phillies' bench now includes two no-brainers in infielder Edmundo Sosa and catcher Garrett Stubbs. If we assume that Darrick Hall will make the team as a DH and first baseman, that leaves two empty spots.

There will be competition in spring training, and this trade does create some drama and stakes for an otherwise set-in-stone roster for 2023. Dalton Guthrie could have the inside track as far as homegrown players go, and others will certainly be in the mix — we'll cover that closer to spring training.

But the Phillies now have a reason to return to the free-agent market again. There are some pretty talented players remaining and the Phillies haven't been shy to spend at all over the last few seasons. Will they add a known quantity to the bench (while also giving the team some more depth to withstand inevitable injuries?)

Here's a roundup of 10 alluring names that are still available:

Jurickson Profar (Can play OF, IF)

Profar is an eight-year MLB veteran who has started at every position but pitcher and catcher. He has a little power (15 homers per 162 games) but is a .238 career hitter known more for his defense. He played 146 games in left field for the Padres last season. In small doses, he might be a good fit as a utility man with postseason experience.

Josh Harrison (OF, IF)

Harrison is a two-time All-Star who has a .277 career batting average and can play everywhere on the field. He's entering his age 35 season, so that could make him an affordable addition. He was signed by the Phillies for the 2020 season but never appeared in a game.

Would the Phillies want to bring in a four-time Gold Glove winner? Simmons boasts that hardware but he's struggled at the plate over the last two seasons, hitting .216 combined for Minnesota and Chicago. The real knock against him is his lack of positional mobility. Philadelphia has Trea Turner, Bryson Stott and Edmundo Sosa who can each play short and second on the 26-man roster already.

Phillies fans know Mancini from the World Series with the Astros. He played all three outfield positions, first base and DH there as well as in Baltimore where he flashed a little pop — he averages 27 homers over 162 games during his career. He could be a fit to be a fifth outfielder and occasional DH.

Yuli Gurriel (IF, OF)

Another former 'Stro, Gurriel is 38 and coming off a down year at first base in Houston. However, he led the AL with a .319 batting average just two years ago and won a Gold Glove that year too. He has played all over the field and if he isn't able to nab a starting role somewhere he could be a DH and reserve for the Phillies.

César Hernández (OF, IF)

Hernandez started at second base for parts of seven seasons with the Phillies. Could he return as a utility man off the bench who can handle the bat? Hernandez, 32, has a career .267 batting average and has played all three outfield spots, second, short and third over his career. He also has 91 career stolen bases.

The former Red Sox checks a lot of boxes. He has a connection to Phillies president Dave Dombrowski from Boston. He plays all three outfield spots. He is a former All-Star and gold glove winner and has lots of playoff experience. He is, however, light with the bat, hitting .227 over his career. Is he worth a try?

Brian Anderson (IF, OF)

Hailing from Lancaster, Jankowski was briefly the Phillies' fourth outfielder in 2020 and has since bounced around a bit from the Mets to the Mariners. He could be a cheap option to compete for an outfield gig again.