Uelmen made 25 appearances for the Cubs in 2022 and flashed some big potential in his slider. 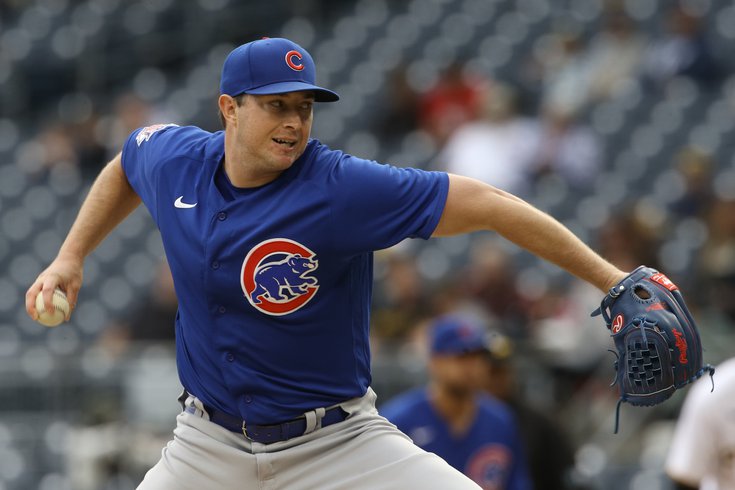 Righthander Erich Uelmen pitching against the Pirates in September. The Phillies acquired the reliever from the Cubs on Wednesday.

The Phillies made a move for a bit more bullpen depth on Wednesday, acquiring righthander Erich Uelmen from the Cubs in exchange for cash.

It's not all that imposing of a line – and his numbers in the minors aren't exactly wowing either – but there's potential there in the middle innings if Uelmen can crack the roster, especially if he can get a hold of his slider, which he went to 29.2 percent of the time last season per Baseball Savant.

Obviously they didn’t trade much to get him but this slider from Uelmen is something. pic.twitter.com/oMAJEfnZ3v

A fourth-round draft pick in 2017, Uelmen showed definite signs of progress coming up through Chicago's system, but never fully found his footing once he was called up to the Cubs. He was designated for assignment on Christmas Eve.

Uelmen took a jump last year in stuff, with improvements to his slider and changeup matching an already-plus sinker. 65 Stuff grade by @Pitching_Bot tells me he’s unlikely to pass waivers, but RHRP is area of depth here. Best of luck to Erich, really enjoyed covering his ascent. https://t.co/5oEhegRans

The Phillies are bringing him in at a low cost and can see what they have when pitchers and catchers report to Clearwater next month, but at face value, they have another righthanded option who can jump between Philly and Triple-A Lehigh Valley as needed with minor-league options remaining on his contract.

"You have to have a couple of guys in your bullpen who have options in case you need a pitcher, in case you need length, or in case you need to swap somebody out," manager Rob Thomson said back in November. "You can't have eight guys down there with 10 years of service that you can't send to Triple-A."

The Phillies' bullpen improved after horrendous 2020 and 2021 campaigns, but still left a lot to be desired and ultimately got stretched too thin in the World Series when their go-to options in José Alvarado, Seranthony Domínguez, and Zach Eflin (now with the Rays) couldn't push them through.

Now Uelmen will be a name to possibly keep an eye on too.

To make room for Uelman on the 40-man roster, the Phillies designated 32-year old righthander Vinny Nittoli for assignment.