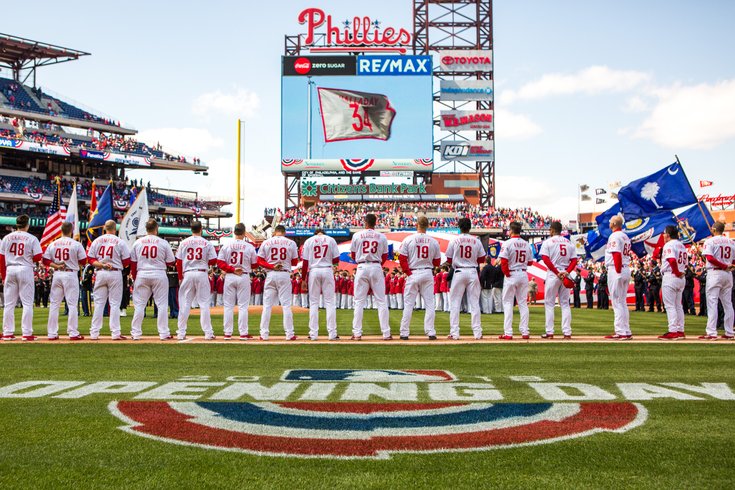 The Philadelphia Phillies line the field on Opening Day 2018.

The Phillies' 25-man roster continues to shift as spring training is how just days away. Last week, the team added arguably the best catcher in the game to an already re-vamped line up.

One season ago at this time, Phillies fans were scraping the barrel for a star to root for. They found one in ace Aaron Nola, a Cy Young award finalist. This year there are no shortage of players with mass appeal and All-Star potential.

Philadelphia looks like it will be a contender in 2019, with or without Manny Machado and/or Bryce Harper.

Here's our second attempt at projecting the club's 25-man roster with pitchers and catchers reporting to Clearwater in a few days:

The Phillies swapped Jorge Alfaro, 25 and on the rise, for Marlins' star Realmuto, 27 — along with two top prospects. How much of an upgrade was it for Philly?

Perhaps you are upset the Phils parted ways with top pitching prospect Sixto Sanchez in the deal, or are concerned that Realmuto remains in team control for just two seasons, but it would be hard to argue he's not a big upgrade. Realmuto has all five tools and will bat all over Gabe Kapler's line up.

Hoskins' natural position is first base. With Carlos Santana at first last year Hoskins played a lot of right field, but according to Kapler, the slugger could raise his offensive game even more being back at the first base bag.

Reports seem to make it more and more likely that Franco will get another crack at starting at third this coming season — where he may split some time with utility man Scott Kingery. If Machado goes to another squad, Philly doesn't seem to be interested in Mike Moustakas anymore.

He's hit 20 or more homers in each of the last three seasons and with much if the offensive pressure lifted due to recent additions he may find his way back to form.

This is Harper's spot if the Phillies sign him. If not, there will be some competition to start in right and with some outfield depth on the roster, it could be right field by committee is it's not left field by All-Star MVP slugging superstar.

Knapp and one of the two left fielders mentioned above will be on the bench, and if Altherr and Cozens each make the 25-man roster the Phils will have six outfielders. Keep an eye on training camp to see if an infielder plays his way onto the club, or if the team decides to leave an outfielder out. There also could be a minor move made to upgrade catcher again, as Knapp now is a serious drop off from Realmuto behind the backstop.

Rumors continue to swirl about the Phillies possible interest in, well everyone. This includes pitchers — like Corey Kulber, and Dallas Keuchel, who also remains a free agent. If Philadelphia does not add a starter, the rotation will likely remain unchanged from a year ago.