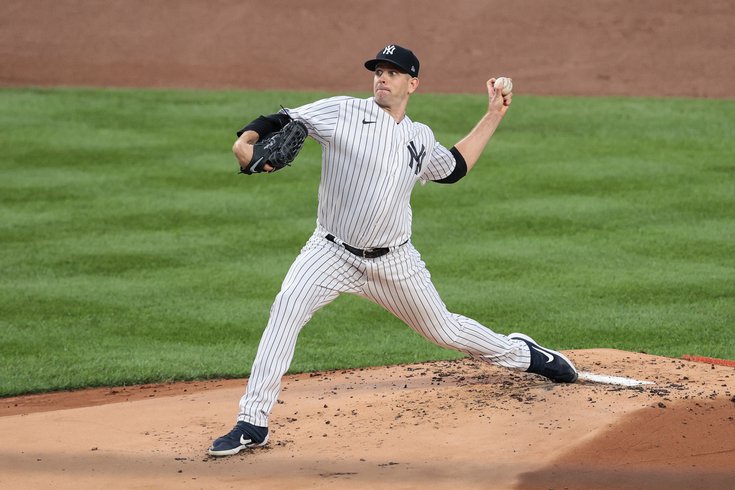 After a slow start to the MLB offseason, which was the norm for most teams around the league, the Phillies have been quite busy the last few weeks, not only re-signing J.T. Realmuto and Didi Gregorius, but also signing bullpen help like Archie Bradley and adding to their starting rotation depth with the signings of Matt Moore and Chase Anderson.

With the addition of those last two, it appeared the Phillies' rotation was more or less set — or at least the competition was set, with Aaron Nola's, Zack Wheeler's and Zach Eflin's names written in ink atop the rotation, and Moore and Anderson battling for the final two spots with the likes of Spencer Howard, Vince Velasquez and possibly Ivan Nova.

Even if they wanted to go with a modified six-man rotation, with three starters splitting the final two vacant spots, the Phillies still appeared to have one starter too many, which is why it was surprising to see this report from MLB.com's Mark Feinsand suggesting that Dave Dombrowski and Co. might not be done adding starting pitching.

The Phillies and Cardinals are each actively looking at free-agent starting pitchers, per sources. Jake Odorizzi, James Paxton and Taijuan Walker are the top remaining starters.

Feinsand went on to clarify that he was excluding Trevor Bauer, the clear No. 1 starter on the market, because he was out of the Phillies' price range. The three he did name, however, would be closer the Phillies' limit, as they currently sit a projected $12.6 million below the luxury tax threshold, according to Spotrac. All three of those pitchers are currently in the Top 30 of CBSSports.com's list of the top 60 free agents this offseason, with Paxton (No. 18) the highest.

If, however, the Phillies can't afford any of them — or are simply looking for a less expensive option — guys like Cole Hamels and Rick Porcello remain available.

So, why would the Phillies still be looking to add more depth to their starting rotation when their bullpen was clearly the bigger issue last season? In fact, it was so bad, that it was the worst in MLB history.

Well, for starters, the better your starting pitching, in theory, the less you'll have to use your bullpen. But that pretty much goes without saying. There's also the concern that COVID-19 could postpone more games, creating more double-headers (like there were in 2020), and having extra arms you can trot out to start when necessary could be a big boost. There's also the fact that pitchers didn't throw nearly as many innings as they're used to last season, which could lead to lower usage rates in 2021 in an effort to avoid injury. And, speaking of injuries, that's the simplest reason to have extra starting depth, because you never know when you'll need an extra body.

If the Phillies can do it while still leaving themselves some flexibility at the trade deadline, good for them. Much to the surprise of many, the Phillies have actually had a successful (and busy) offseason, one in which they've spent more than almost any other team in baseball. It may not have had the same splash as the year they signed Bryce Harper, but it might wind up being just as impactful as the team looks to make the playoffs for the first time in nearly a decade.

MORE: MLB Rumor Roundup: Analyzing the Phillies' recent moves and what they have left