Why the Phillies can't realistically trade for another star player 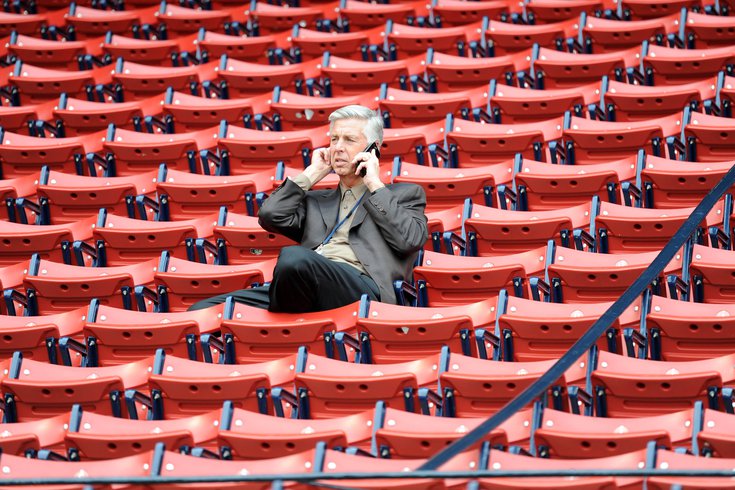 When the Phillies hired Dave Dombrowski to become the team's new front office chief a few weeks ago, there was a bright hope for the Phillies. He's a baseball executive who likes to make a splash — a deal-maker.

With the Red Sox, he traded for Craig Kimbrel, for Chris Sale and for Nathan Eovaldi. He made 22 noteworthy trades in five seasons with Boston, and when he was with the Tigers, he navigated the team's acquiring of Miguel Cabrera, Max Scherzer, Yoenis Cespedes and many others.

He made a living off blockbuster trades and he built contenders everywhere he worked.

The Phillies, though, are different. For a team that has, in recent years, added two key pieces via trade — J.T. Realmuto, before re-signing him this offseason, and Jean Segura — there unfortunately may not be another big swap on the horizon to put the Phils into contention.

It's not for a lack of trade targets out there. Just this week, as the Phillies were contemplating if they should spend a little more than they are comfortable spending on Didi Gregorius at shortstop, many noticed the lack of reported interest from the Phillies on players like Colorado's Trevor Story, Chicago's Javier Baez and Kris Bryant, and other All-Star infielders.

When the Mets made their big move to bring in Francisco Lindor — a player at a premium position that the Phillies badly need — there was no resistance and no push to outbid them.

The Phillies have three players — Bryce Harper, Realmuto, and Wheeler — combining to make around $72 million each year for the next three seasons. Add Segura and Aaron Nola and that's five players, on a roster of 26, earning almost $100 million. That's roughly half of the team's entire expected payroll, with the luxury tax around $210 million and the Phillies not likely to get close to surpassing it.

What does this have to do with their lack of making trades? Well, the Phillies would in all likelihood, if they were to try and bring in a superstar like the Mets did with Lindor, be forced to consider an extension of the acquired player, as almost everyone on the trade block has an expiring contract. As we saw firsthand with Realmuto, that's a frustrating situation and not one the Phillies want to have on their hands again.

The Phillies trading for a rental would only make sense if the team was, say, in firm control of first place come August and looking to really make the leap toward a World Series title. Do you see that happening?

Adding another superstar to this Phillies roster during the offseason would balloon their payroll and force them to make cuts elsewhere. It also would likely put more stress on homegrown players who perhaps are not ready to be relied on. We saw some of it in the Phillies infamous bullpen collapse in 2020.

Speaking of those prospects, the Phillies pool is, frankly, not good. From terrible draft decisions, to bad development of prospects, to making too many moves as buyers with a team that hasn't contended since 2011, the Phillies farm system is in bad shape. Keith Law came out with his top 100 prospects Thursday and one Phillie, starting pitcher Spencer Howard, made his list at No. 62. And Howard won't even be considered a prospect for much longer as he's expected to be in the rotation to start the season.

The Phils have not seen their top picks, like Mickey Moniak or Cornelius Randolph, pan out in recent years, and while they have high hopes for other first rounders, like Bryson Stott and Mick Able, the team really can't afford to further deplete their already depleted reserves of prospects to bring in a player they may not be able to re-sign.

“I really don’t want to be sacrificing people that might be part of our future success for short-term gains, if it’s not the difference-maker in trying to be a championship club,” Dombrowski said in December.

So why not just trade, say, Segura and a few mid level prospects for a player like Story? Why on earth would the Rockies want a more expensive and older player, like Segura? The Phillies might actually have to become sellers if they hope to get the prospects they'd need to improve via trade. Rhys Hoskins has quietly been rumored to be on the trade block. He hasn't been great and probably won't fetch an A-list prospect — and if he does play great, the Phils will want to keep him, as he is under team control for a few more years. There aren't many other attractive trade chips on the list.

So, to recap, the Phillies don't have enough good prospects, or enough money to trade for anyone of significance. Which is why free agency is and will be so important for the Phillies for the next few seasons.

"Well, I consider it a retool and not a rebuild, for sure," Dombrowski said. "I think there are too many good players on the club.”

Dombrowski has shown a knack for helping teams make big trades, for better or worse. But the Phillies will present new challenges. There are a lot of good baseball players in place in Philadelphia. Maybe if they played as good as expected it would make things easier for once.