Could more moves still be in store for the Phillies? 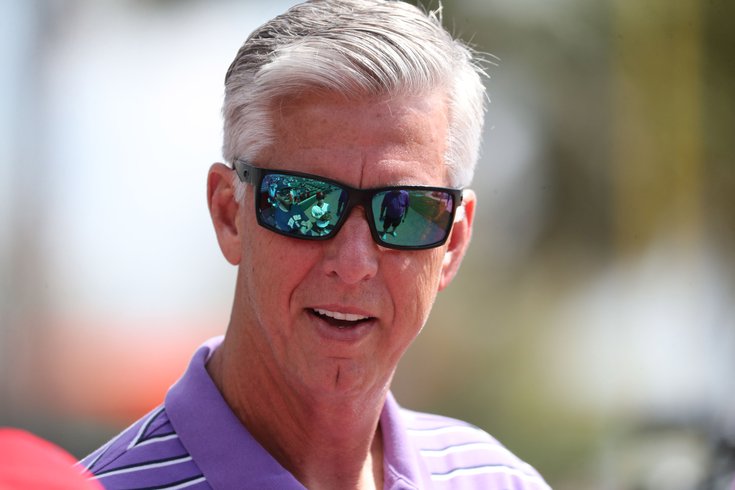 UPDATE [5:11 p.m.] — With the trade for Ian Kennedy and Kyle Gibson, as well as the Freddy Galvis deal, now official, this is probably our final update of the day, and I thank all of you for hanging out throughout the day. This isn't exactly news or even a trade deadline rumor, but it's something that, amid all the deadline chaos, I hadn't even really considered. And it makes a lot of sense when you think about it.

The #Phillies received cash in the deal with the #Rangers today, it's possible they still make a run at free agent Cole Hamels as a No. 5 for the rotation.

The #Phillies also received some cash from the #Orioles in the Freddy Galvis deal. If there is a concern about going over the threshold, some of that $ could limit those concerns.

The Phillies are (rightfully) getting some heat online for not doing enough ahead of the deadline — and their seeming unwillingness to again cross the luxury tax threshold, despite publicly saying they'd consider it — but maybe they still have another move left to make? They were one of the teams who scouted Hamels earlier this month, and although reports suggest he might prefer a return to the West Coast, maybe one last push with the team where he won World Series MVP could be enough to convince him to return.

Would that added move still be enough? Probably not, but it would be a great storyline to follow.

Freddy Galvis is returning to the Phillies in a deal with the Orioles, source tells ESPN.

He's currently on the injured list but is expected to be back soon. Read more, here.

UPDATE [3:54 p.m.] — The deadline is rapidly approaching, and we'll have to wait and see if the Phillies have any more moves left. One player we know they won't be trading for anymore is Cubs' infielder Kris Bryant, who will reportedly head to San Francisco to play for Gabe Kapler.

Is that the last big domino to fall?

UPDATE [3:07 p.m.] — It appears to be a done deal, with the Phillies acquiring both Kyle Gibson and Ian Kennedy from the Rangers. And it looks like Spencer Howard is indeed being sent to Texas in the deal.

Spencer Howard is going to the Rangers in the deal for Kyle Gibson and Ian Kennedy, sources tell ESPN. He’ll be joined by two other prospects going from Philadelphia to Texas.

UPDATE [3:00 p.m.] — With an hour left until the deadline, we got our first real juicy Phillies rumor of the day.

After earlier reports that suggested the Phillies were in talks with the Rangers for both starter Kyle Gibson and closer Ian Kennedy, Ken Rosenthal is reporting that a deal is close.

Previously, Spencer Howard's name was floated as part of the return package being sent to Texas. No word yet on if that's the case, but stay tuned...

UPDATE [2:51 p.m.] — While the Phillies appear to still be looking for the right move at the right price, the team they're chasing in the NL East, the Mets, continue to improve their roster. Their latest move was adding shortstop Javier Baez from the Cubs.

According to Ken Rosenthal, they might not be done yet either...

Mets are talking about adding a pitcher from Cubs in addition to Javier Báez, either Zach Davies or Trevor Williams, source tells @TheAthletic. Deal is not close at this moment.

The Phillies were also reportedly in on Kimbrel, but rightly balked at this asking price from the Cubs.

Phillies loved the idea of Kimbrel. Price started with Mick Abel. No can do

Stay tuned, as we have just over an hour left for Dave Dombrowski and the Phillies to make their move (if they do at all).

UPDATE [2:18 p.m.] — It looks like the Phillies will be missing out on Craig Kimbrel, which isn't entirely surprising. And it's even less surprising now that there are reports out there that the Phillies could be looking at Rangers closer Ian Kennedy (see below).

SOURCE: I'm hearing Craig Kimbrel has been traded to the Chicago White Sox.

Other reports have since confirmed that Kimbrel is indeed going to the White Sox. Stay tuned, because it appears like the deadline madness is only just beginning...

There will be such a flurry of trades made in the final hour and minutes of the 4 p.m. ET trade deadline today that teams will still be announcing moves at least 30 minutes afterwards.

UPDATE [1:36 p.m.] — According to Jon Heyman, the Phillies are again among the teams checking in on Byron Buxton, who is seemingly on his way out in Minnesota. The team had previously been linked to him before reports suggested the Twins might try to keep him. Now, after trading Jose Berrios earlier on Friday, it seems like interest in Buxton is heating back up.

Phillies are among 6/7 teams checking in on Byron Buxton. With the Berrios deal, things have heated up. Phillies love BB for CF.

UPDATE [1:36 p.m.] — The Phillies might not just be targeting Kyle Gibson from the Rangers. They could also be looking at Texas reliever Ian Kennedy, who has 16 saves to go with a 2.51 ERA but is also unfortunately even older than Gibson (36). Unlike Gibson, however, he doesn't have one year of team control left, so he would be a true rental (unless the Phillies think they could get something done to bring him back).

Sources telling me Phillies talk with Rangers continues re: Gibson with RHP Spencer Howard very much involved in talks. But possibility of packaging Kennedy/Gibson is also very much in mix, too.

At least to this writer, that seems like it would be a foolish move, both in the short and long term. But I don't get paid millions of dollars to run a baseball team so what do I know?

UPDATE [1:16 p.m.] — It appears part of the asking price for Rangers starter Kyle Gibson would be pitching prospect Spencer Howard, who not all that long ago was considered one of the Phillies' "untouchables." Now, he could be on the move for a middle-of-the-rotation guy in his 30s that certainly isn't going to be the difference between the Phillies making a run or not.

Per source, Spencer Howard is one of the names tied to the asking price for Kyle Gibson. Gibson is under contract through next season and is having a career year with Texas (6-3, 2.87 ERA). #Phillies

UPDATE [1:03 p.m.] — According to Mark Feinsand, the Phillies "are making a hard push" for 33-year-old Rangers starter Kyle Gibson, who is having a nice season down in Texas and could give the team some much-needed starting pitching depth.

Per source, the Phillies are making a hard push for Rangers starter Kyle Gibson.

Despite his age, Gibson is having a career year, sporting a 2.87 ERA and 1.177 WHIP, both of which are career-best marks. His opponents' slash line of .224/.300/.326 are also all the lowest of his career, and his 2.29 strikeout-walk ratio is among the best in career. Oh, and he also made his first All-Star Game this season.

We'll have more as it unfolds...

UPDATE [12:51 p.m.] — A couple of updates from Ken Rosenthal, who was the first to report that Jose Berrios is headed to the Blue Jays. But that doesn't really impact the Phillies, as they were never reportedly in on Berrios, mainly because they couldn't afford him.

The other nugget came out at around the same time, and while it isn't necessarily breaking news it could have a bigger impact on the Phillies, who have been linked to both these Cubs players in recent weeks.

Rays are talking with Cubs about both Kris Bryant and Craig Kimbrel, sources tell @TheAthletic. Could trade for one of them individually or both together. No indication a deal is close.

Both Kimbrel and Bryant were always sort of long shots for the Phillies, especially if the Phillies aren't 100% sold on their chances this season, but it's still worth a mention. Stay tuned...

UPDATE [10:57 a.m.] — It's only been five minutes since my last update, but we have another to share. It appears that the Phillies are actually making moves!

That acquisition is certainly not going to move the needle, but this right here is hilarious.

Can confirm @ByRobertMurray's report that the Pirates are trading LHP Braeden Ogle to the Phillies.

In return they're getting Abrahan Gutierrez, the catcher they were supposed to get Tuesday in the Tyler Anderson deal that never happened.

At least the Pirates got their guy.

UPDATE [10:52 a.m.] — According to Jayson Stark, who is as reliable as anyone on all things Phillies, says the team is still involved in conversations about starters, but their lack of top-end talent in the farm system has kept them out of any big sweepstakes. That, and the Phillies apparently aren't looking to part ways with some of their younger talent (which makes sense given that they're not really a contender in 2021). That being said, there is one young prospect they'd be willing to part ways with. Here's the latest from Stark:

One Phillies prospect who's definitely in play: Spencer Howard.

But hearing lots of wariness in the industry about what he is and where he's heading after a strange year. https://t.co/wJfI6N544m

UPDATE [10:21 a.m.] — This is actually one that involves a pitcher who might've made sense for the Phillies, Rockies starter Jon Gray. According to Mark Fiensand, the 29-year-old righty is now apparently off the market. (And, yes, this rumor is a couple of hours old, but since it came out before the below live tracker went live, we figured we'd add it here for posterity.)

Per sources, the Rockies have no plans to trade either Jon Gray or Daniel Bard today. Trevor Story is obviously still the big key to their Deadline day.

The Rockies have been trying to extend Jon Gray, per sources. If no deal is reached, one possibility is Colorado giving Gray a Qualifying Offer after the season; the salary would be high, but a one-year deal for a solid starter is never a bad thing for a team.

Of course, that could just be posturing by the Rockies to up his price tag. We shall see...

Happy MLB Trade Deadline Day 2021! As of this writing, the Phillies have yet to make a move as they stand at 51-51, 3.5 games behind the Mets for the National League East lead.

All along, Dave Dombrowski has indicated (read: flat-out stated) that his team was going to not only be buyers but was going to be aggressive as well, possibly willing to exceed the luxury tax threshold in order to improve the roster. But so far, a ton of moves have been made around the league, and the Phillies have been silent, with the exception of their attempted trade for Tyler Anderson that fell through at the last minute.

Will Dombrowski pull something off in the final hours before the 4 p.m. deadline? Or will the Phillies — who are currently +400 to win the division according to BetMGM, via Pickswise — be left to hope they can keep pace with the Mets with the team they currently have? Let's get right into the latest rumors in our live tracker (and we'll keep this post topped off with any rumors that involve the Phils).