After multiple reports confirmed a deal with Philly was in place, Anderson will instead go to the Mariners 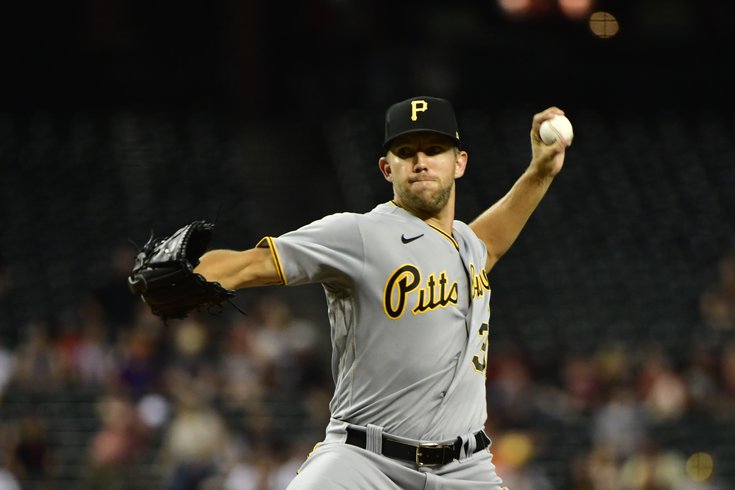 UPDATE [12:55 a.m.] — The trade sending Tyler Anderson to the Mariners is complete. The Pirates got a pair of prospects. The Phillies got — *checks notes* — absolutely nothing.

We'll see if they change that between now and Friday's trade deadline. Stay tuned...

UPDATE [12:40 a.m.] — Just over six hours after it was reported that an issue with the medicals on one of the prospects the Phillies were sending to the Pirates for pitcher Tyler Anderson, it not only appears that the deal is off, but that Anderson has already found a new home in Seattle.

The Seattle Mariners are finalizing a deal to acquire left-hander Tyler Anderson from the Pittsburgh Pirates, sources tell ESPN.

The Pirates thought they had a deal today for Anderson with Philadelphia, but it fell through on medical review. Seattle went and got him instead.

The issue was over pitcher Christian Hernandez, according to NBC Sports Philadelphia's Jim Salisbury, who had some interesting information to relay on how this all went down. And it got very soap opera-y...

Phillies officials were not available for comment late Tuesday night, but earlier in the evening one club official expressed some displeasure over the way things were going down with Pittsburgh.

The Phillies wondered if they might have been cut off at the pass by the New York Mets, who were also in on Anderson. In the end, Seattle got him. [...]

In the aftermath, there are questions that need to be answered. Foremost: Did the Pirates renege on a deal? If they did, did they have a legitimate reason?

There are subplots to all this.

Pirates general manager Ben Cherington was pushed aside in Boston – and ultimately left on his own – when Dave Dombrowski, now leading the Phillies baseball operation, arrived there in 2015. Did Cherington whistle a high, hard one by Dombrowski's chin? More than one baseball person asked that question Tuesday night.  [nbcsports.com]

That would certainly be something, but it's hard to say without knowing what the specific issue is with Hernandez. We'll have to see how the Phillies respond to this publicly — if they do at all — in the coming days as Dombrowski will almost certainly be made available to the media around the deadline.

Speaking of the deadline, no word yet on how this impacts the team's deadline plans, but the Phillies had been in the market for starting pitching depth, bullpen arms and help in the outfield. With two-plus days left to make their move(s), the Phillies have addressed none of the above. And with their loss to the Nationals on Tuesday, they fell back to .500 on the season (50-50) once again. They also remain 3.5 games behind the Mets after failing to take advantage of New York's loss to the Braves.

UPDATE [6:02 p.m.] — Ken Rosenthal of The Athletic has some more details on why the trade has not yet gone through — and why Tyler Anderson might've been out in the Pirates bullpen warming up prior to Tuesday night's game...

The Pirates’ trade of Tyler Anderson to the Phillies has been held up because of an issue (presumably medical) with one of the two players going back to Pittsburgh, according to a source with knowledge of the situation. Unclear where talks stand, whether player will be replaced.

Just because Anderson was seen throwing in the bullpen in Pirates gear doesn't mean the deal is off entirely. Tonight was his night to pitch, so he could simply be getting in a bullpen session to stay fresh since he was already pulled from his schedule start. Then, if the trade goes through, he'll be ready to pitch in Philly later this week.

Of course, that's assuming it still goes through.

UPDATE [5:48 p.m.] — According to Jon Heyman, the Phillies' move to acquire Tyler Anderson from the Pirates appears to have hit a snag of some sort. The cause remains unknown, and the fact that Heyman quickly pivoted from "delayed" to "hit a snag" makes it definitely worth monitoring.

The Anderson trade to the Phillies has been delayed. The cause is uncertain.

Hear Anderson to Phillies trade has hit a snag. Not sure the cause.

But wait, it gets weirder...

What in the world. So Tyler Anderson, wearing Pirates gear, is throwing in the bullpen.

Stand by, this may not be a done deal yet.

The Phillies are acquiring Pirates starting pitcher Tyler Anderson, according multiple reports. Anderson was scratched from his start on Tuesday night, with the belief being that he's headed across the state to the Phillies. Jayson Stark of The Athletic was the first to report.

LHP Tyler Anderson is scheduled to start for the #Pirates tonight. But multiple sources say that's not likely to happen.

The Pirates are in serious conversations to trade him to the Phillies for 2 second-tier prospects.

The Phillies had been in the market for starting pitching to bolster their rotation behind their top three of Zack Wheeler, Aaron Nola and Zach Eflin. It appears as though the 31-year-old lefty will do just that.

While those numbers are hardly eye-popping, there's one area in which he'll be a huge upgrade over what the current rotation is offering. And his addition alone could help another area of the team that's been struggling — the bullpen — by going deeper into games than guys like Vince Velasquez have been going, which causes extra strain on an already weak unit.

According to Matt Gelb of The Athletic, if the deal goes through, Anderson would likely start on Thursday in place of Velasquez.

So, what did the Phillies give up to get Anderson? Not a ton, as should be expected for a back-half-of-the-rotation guy.

Hernandez, a 20-year-old righty, is the Phillies' 29th ranked prospect, but Gutierrez, a 21-year-old catcher, didn't crack MLB.com's list of the Top 30.

Stay tuned, and for all the latest news and rumors, be sure to check out our live tracker...

MORE: Kevin Cooney: Deadline buyers or not, Phillies should spend second half of season looking inward