Plus, Spencer Howard could be the starting point if the team really wants the Cubs closer. 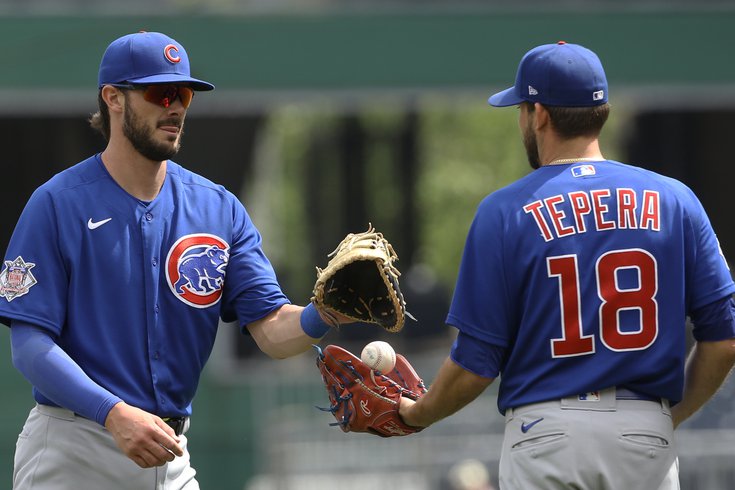 Cubs' Kris Bryant gives the game ball to reliever Ryan Tepera after the final out of a recent game.

UPDATE [12:51 a.m.] — So, it appears the Phillies' deal with the Pirates for Tyler Anders has fallen through over the medical report of one of the prospects headed to Pittsburgh. Meanwhile, Anderson has been re-routed to the Mariners and some are wondering out loud if there was some foul play — or at the very least bad blood — involved on the Pirates' part.

UPDATE [5:00 p.m.] — Despite the addition of Tyler Anderson to the starting rotation, the Phillies are still in the market for bullpen help. And, according to Jim Salisbury, Craig Kimbrel remains an option, albeit a longshot. The other? Ryan Tepera, who we discussed in more depth below.

UPDATE [4:25 p.m.] — The Phillies have reportedly traded for Pirates starter Tyler Anderson, who will start in place of Vince Velasquez on Thursday night. You can read more about that trade — like who the Phillies gave up and what they'll be getting in Anderson — right here.

UPDATE [3:12 p.m.] — Others like Jon Heyman have confirmed Phillies' interest in Rodriguez, as well as the Pirates' interest in Marchan. But the Phillies may not be willing to part with Marchan in exchange for Rodriquez, according to the latest from Alex Stumpf of DK Pittsburgh Sports.

Can confirm the Pirates have inquired about Marchan from the Phillies in a possible Rodríguez trade, but per a source, it doesn't sound like the Phillies want to part with their No. 4 prospect (per MLB Pipeline). Maybe not completely off the table, but unlikely. https://t.co/dmxVBrY6UO

UPDATE [12:34 p.m.] — It appears the Phillies are also interested in Pirates reliever Richard Rodriguez. The 31-year-old righty has a 2.82 ERA in 2021, and according to NBC Sports Philadelphia's Jim Salisbury, this rumor "has some legs" as the team has discussed dealing 22-year-old catching prospect Rafael Marchan to acquire Rodriguez.

This has legs. Rafael Marchan has been discussed https://t.co/BGp5ue8B71

There's a catch, though, as Rodriguez has been one of the pitchers greatly impacted by the league's crackdown on foreign substances, and his numbers since the league started more closely monitoring the situation are not encouraging.

The average spin rate for Richard Rodriguez's slider is down to 2000ish RPM's post-sticky-stuff and his ERA has been 5.40 since June 21st.

Gonna be a hard no for me.

This is what I am talking about. The sticky stuff crackdown moved him from a mid tier closer to a depth reliever. Which is what the Phillies sort of need, but you also should only pay that kind of cost. https://t.co/NahkVp2SNi

You can draw your own conclusions based on that drop in spin rate and rapid rise in his ERA, but it looks like the Phillies are seriously interested in acquiring Rodriguez from the Pirates as Dave Dombrowski continues to look for bullpen help.

Throughout the lead up to this year's MLB trade deadline, one at which the Phillies have already admitted publicly they'll be buyers, there have been three main areas of need for president of baseball operations Dave Dombrowski and general manager Sam Fuld to address: center field, starting pitching and, of course, the bullpen.

On Monday, we took a look at some starting pitching options the Phillies could look to add given what they have to spend and their position in the standings. Going all in at this point is a tricky proposition, even with ownership's blessing to go over the luxury tax, as they could greatly diminish their future for what amounts to a lottery ticket. Additionally, they might not even have the pieces to acquire a major piece — especially one under long-term control — before Friday's trade deadline, which could force them to settle for some sort of rental option. And if that doesn't prove to be enough to end their decade-long playoff drought, then what was it all for?

MORE: Cooney: Deadline buyers or not, Phillies should spend second half of season looking inward

Today, we'll take a look at a pair of bullpen options the Phillies could target as backup plans to top closer Craig Kimbrel, who is on the block in Chicago along with the rest of the Cubs. While it would be tricky for the Phillies to afford Kimbrel if any sort of bidding war ensues, the Phillies could opt to deal for another, less-expensive Cubs reliever instead. And there's reportedly interest, according to Jon Heyman.

Phillies are indeed on Craig Kimbrel who could transform their beleaguered bullpen. Lots to talk about with Cubs as they like Andrew Chafin (no runs allowed since May 7) and Ryan Tepera as well.

One of those pitchers, lefty Andrew Chafin, was dealt to the Athletics on Monday night. But Ryan Tepera is still available and shouldn't cost the Phillies too much if they're looking to upgrade their bullpen.

At 27, Tepera is four years younger than Chafin and has a 2.91 ERA in 43 1/3 innings over 43 games while striking out 50 batters. He has experience as a set-up man and a bit as a closer — and more importantly hasn't allowed an earned run since June 28. The Phillies could certainly do worse than this veteran righty.

In order to get that veteran relief help, especially if it's Kimbrel, the Phillies could include one of their top prospects in the deal: Spencer Howard. Here's more from Jim Salisbury of NBC Sports Philadelphia:

Of course, there's always the chance that Howard could be gone by Saturday. There have been indications that the Phillies would be willing to use him in a trade, possibly for relief help. The Phils have targeted Chicago Cubs closer Craig Kimbrel, and had targeted his bullpen mate, Andrew Chafin, before he was dealt to Oakland on Monday night. The price is high on Kimbrel and there are several teams in addition to the Phillies pursuing him. The Phillies' payout could start with Howard.

But, then again, maybe the current pitching pinch means the Phillies will hang on to him.  [nbcsports.com]

Howard left Monday night's win with a blister issue on his throwing hand. Will he still be here on Saturday when he's scheduled to start again?

Sending up the bat signal

On a related note — in that it involves another Cubs player who could be on the move before Friday — can we talk about the bat Bryce Harper used in the ninth inning of the Phillies' win over the Nationals?

Harper and Kris Bryant have some history, but why would he be using Bryant's bat? And why now, just a few days before a trade deadline in which it's been highly speculated that the Cubs third baseman could be on the move? The two are close friends and there were even reports that Harper was hoping to land in Chicago before signing with the Phillies, so the intrigue is obvious.

The Phillies have been linked to Bryant in the past, and with Dombrowski apparently willing to go over the luxury tax, it appears he could be had if the Phillies really want to make a strong play to satisfy their $330 million man. And, yes, they currently have a young Alec Bohm at third base, but there's a belief that he might be better served with a move to first base. What then becomes of Rhys Hoskins? Well, if the designated hitter comes back to the National League for good next year, they'll have a perfectly-suited DH to slide into that spot. Additionally, Bryant plays multiple positions, including first base and all three outfield spots. Finding a spot for him won't be an issue.

Or maybe it was all just a total coincidence and, as can often be the case, we're reading way too much into it. Either way, we'll have you covered with all the latest news, rumors and analysis leading up to the MLB trade deadline right here in our live tracker. Stay tuned...