Guys like Eddie Alvarez and Paul Felder paved the way, but a new generation of fighters are ready to take up the mantle.

The seed started 21 years ago among a tight-knit group of friends in a dimly lit basement in the Frankford section of Philadelphia. You know the kind, where you enter through rusted double-trap street cellar doors whose metal loops you’ve tripped over a thousand times, down tiny, creaky wooden steps you hope don’t collapse underneath your feet.

That’s where Eddie Alvarez would go after a sweaty day of cement work with Stephen Haigh, building the foundation of the “Fight Factory.” It introduced the city of Philadelphia, along with Phil and Rick Migliarese, to the blossoming new sport of mixed martial arts.

What emerged from those nascent moments in the dark was former UFC star Paul Fender and present contenders Sean Brady and Chris Daukaus, and rising star Pat Sabatini. At the time Alvarez, a North Catholic all-Catholic League wrestler who went on to win the Bellator and UFC lightweight titles, had no idea what he was starting.

Now, it seems, MMA, formerly banished to the Philadelphia sports underground, is taking over with the deepest, and most talented class of fighters ever, many of whom came through the Atlantic City-based Cage Fury Fighting Championship, a smaller promotion run by president Rob Haydak that serves as feeder of sorts for UFC and regularly hosts fights in the Philly area.

Whereas Alvarez and his Fight Factory team once had to go from boxing gyms to fitness gyms like vagabonds two decades ago to train, there are over 20 gyms in the Philadelphia area where anyone can find quality MMA work.

“There is a decent amount of UFC guys today, with myself, Pat, the Daukaus brothers [Chris and Kyle] and our gym started in 2013,” said Brady, 28, who works out of the Renzo Gracie Philly Brazilian Jiu-Jitsu Academy on North American Street. “We started with a handful of guys, and through time, we got bigger and bigger. Right now, it’s just me and Pat out of our gym [in the UFC], but there’s going to be multiple guys eventually going [to the UFC].

“Philly is a tough city, and I know boxing has always been big here, but the MMA training and the coaching is really good here. There are a lot of good wrestlers on the East Coast, primarily Pennsylvania, and they’re coming to the city and training here.”

Nationally, Brady said, Philly has the same reputation in the MMA world as in the boxing world—and that’s as a gritty, tough town. 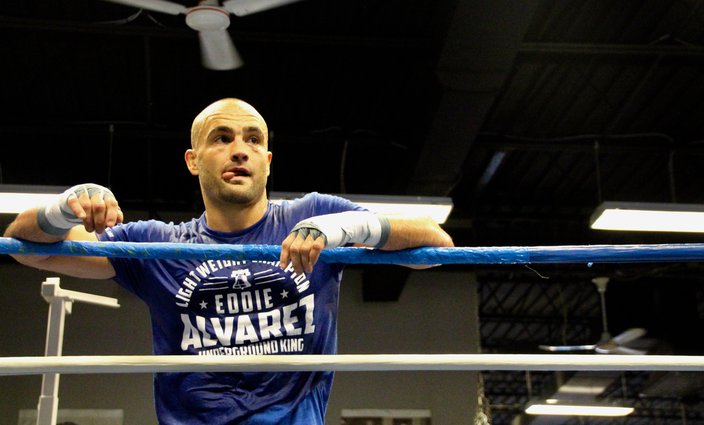 Eddie Alvarez catches his breath during a break in his media day workout at Joe Hand Gym in Philly.

“Eddie [Alvarez] was the Bellator champ and the UFC champ, and it started with Eddie. His success started making guys like me think about going into MMA,” said Brady, who is 14-0 and is the UFC’s No. 14-ranked welterweight. “The reputation of Philly has really risen in the MMA world a 100-percent over the last two or three years. It is like all boats rise.

Five years ago, Daniel Gracie, who runs the Gracie Academy and hails from a legendary family tree of MMA pioneers, admitted every time he heard about Philly, it was about boxing. Gracie felt it was a good place to build an MMA gym.

“Today, fighters are looking for big camps. We like to build fighters from scratch, and fighters were coming from big facilities in Las Vegas, in Florida, and some in New Mexico. Fighters will come from all over the world to join big camps.

“It’s why I came here. We have the fighters; we have the talent. It’s why I wanted to invest my time in this area. In my eight years of being in Philly, this is the greatest talent, most talented pool. Paul Felder started that, and after Paul, the UFC matchmakers listen.

“Now, if I’m talking about a name to UFC from Philly, they will listen. Eddie was the only one. Now, Philly has become one of the hottest cities to get fighters from.”

For evidence of this impact, look no further than the number of major MMA events that have taken place in this city. After hosting a couple of UFC PPV cards in South Philly, the last coming in August of 2011, the city went eight years without a fight until the sports biggest promotion returned for a Fight Night card in 2019. This was despite them having multiple fighters from Philly, including a few ranked in the Top 10 and, for a period, the promotion's lightweight champion in Alvarez.

Unfortunately, by the time they returned to the city, Felder, who has since retired, was sidelined with an injury and Alvarez had already moved on to a different promotion, leaving the card void of any Philly fighters.

With the growing pool of talent, it's safe to bet they won't make the same mistake the next time they bring a card to Philly. Especially if the number of UFC fighters from the city continues to grow at the current rate.

Chris Daukaus, 31, has been fighting for 10 years. He’s currently the No. 10-ranked heavyweight in the UFC with an 11-3 record. He’s been everywhere. A North Catholic grad, the Philadelphia police officer drove past an MMA gym every day and was attracted by what he saw.

“There’s actually been no better time for Philly right now in MMA,” Chris said. “Philly is a fighting town. Five years ago, Philly MMA was nowhere. We were a one-horse town with Eddie Alvarez. Five years ago, if you told anyone you were from Philly, you would get a derisive look.

“Philly is known for boxing, and as a wrestling or football state. People would tell me that they didn’t even know MMA was big in Philly. I don’t think there is any reason at all today MMA people would question that anymore. We have people coming up that will be part of the next wave coming up. Everything started with Eddie. We all grew up watching him and what he accomplished and we wanted the same thing.

“He opened the door.”

Alvarez himself admits he didn’t intend on being the “Philly MMA Godfather” who started a movement.

“I’m pretty positive Sean Brady will be a welterweight world champion, and I see a lot of me in Sean when I was his age. Nothing was going to stop me from being a champion. That attitude is pretty tough to stop," said Alvarez, who’s now 37 and is looking for his third title in his third different outlet, Singapore-based ONE Championship, which is currently making inroads with the American audience thanks to guys like Alvarez and Demetrious Johnson. "Sean will be the next champion coming out of Philadelphia, along with one of the Daukaus brothers.

"You live in Philly; the city is a tough life. You have to have a little edge to you, and competitively, this is a city that doesn’t pat its athletes on the back and say, ‘It’s okay, you’ll get them next time.' That’s not how we treat each other and that’s not how we treat our athletes. It’s go the f—k out there and win! If you don’t, and we’re close enough to you in the stands, we’ll spit on you. That’s how I would describe the Philly fans—and I’ve seen it.

“They’re loyal and it’s tough love. But it shapes you. You have a whole city backing you up, you better be ready to go to war for them. I wouldn’t say the seeds were planted with me. They started 10 years ago. We’re all just starting to see the fruit of it now. Sean Brady started 10 years ago, and all of his work, and the Daukaus brothers, you begin seeing it pay off where these guys are and what they’re doing.

“They’re all going to be world champions. I’m glad what I did inspired these guys, if that’s what I did, then hell yeah, I’m proud of that. I’m proud of our guys, and I mean ‘our guys,’ our ‘Philly guys.’”

And they’re not emerging from the basement anymore.