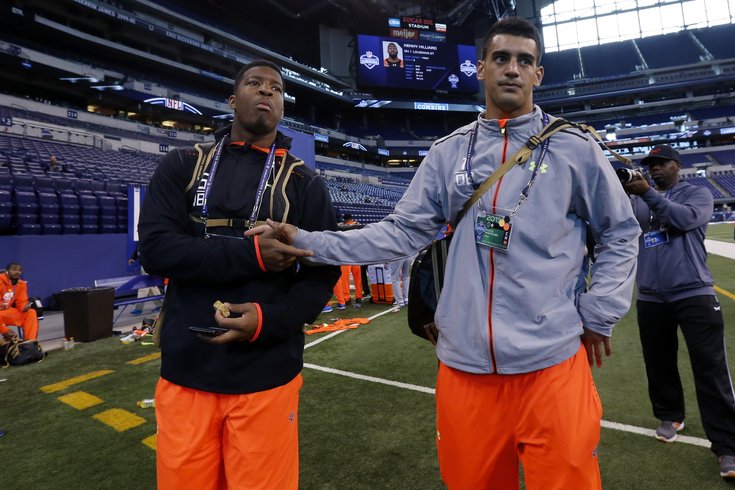 All of the below is a lot of wasted text if the Eagles find a way to trade up and draft Marcus Mariota. However, if the Eagles stand pat at pick No. 20, the following mock drafts give an idea of what players might be available when they are on the clock on draft night.

In case you missed any of the mock drafts we put out this offseason so far, you can find them below:

Since a few names have come up repeatedly, we'll list them in order of the player most commonly associated with the Eagles:

Charles Davis, NFL.com: We are all still waiting to see just how the Eagles manipulate their way into getting Marcus Mariota, but short of that occurring, Collins fits very well as a big-time thumper with range.

Charley Casserly, NFL.com: Cornerback is a possibility here, but Collins fills a major need on defense.

Lance Zierlein, NFL.com: There are several different directions the Eagles could go in here, but Collins makes them tougher and substantially better on the back end.

Don Banks, Sports Illustrated: The Eagles have a crying need for a talent upgrade at safety and just happen to find the draft’s best prospect at that position waiting for them. There won’t be a Marcus Smith-like swing and miss in Philly’s first-round work this year.

Mel Kiper, ESPN: Collins is a safety who does his best work when he's near the line of scrimmage. He has great instincts and tackling ability as an extra defender against the run, and he's the kind of player who can fit seamlessly into this scheme and should be on the field right away. I do think the Eagles will be looking to add another pass-catching threat, but the draft offers plenty of depth in that area, just as it did last year when they added an instant-impact receiver in Round 2.

#JimmySays: Collins is the player most commonly linked to the Eagles in mock drafts, which makes some sense because the Eagles have had a desperate need for help at safety for the last half decade. In fact, Collins was my first round pick for the Eagles in my Eagles only mock draft, version 2.0, although I've since come to disagree with that pick.

The Eagles seem to be steadfast in their desire for a versatile safety who can play centerfield, while also having the ability to drop down and cover slot receivers. They seem to place a much lower value on in-the-box thumpers like Collins. While Collins is a very good player at a position of major need, he's not really the Eagles' cup of tea.

Eric Edholm, CBS: Chip Kelly is all about long, explosive athletes and the 6-foot-1, 199-pound (and 32-inch-armed) Jones is a perfect example of what he’s looking for, and at a need position to boot. Jones is instinctive — one scout we talked to compared him to Devin McCourty coming out of Rutgers — with positional flexibility at safety, which he played earlier in his career, and corner. If you watch Jones play in 2013 before a season-ending shoulder injury in 2014, it’s clear he has big-time ability.

Rob Rang, CBS: Coach Chip Kelly has continued to travel across the country to watch cornerbacks even after his Eagles signed free agent Byron Maxwell to a massive free agent deal. Jones' stock continues to rise after terrific workouts at the Scouting Combine and his pro day.

Dane Brugler, CBS: Connecting the pro day dots, Chip Kelly has paid close attention to big, athletic defensive back prospects this spring. Eric Rowe is in the conversation, but Jones is the better fit and should surprise no one if he's drafted this high.

Dan Kadar, SB Nation: This is a little bit early for Jones, but he’s a perfect fit with Philadelphia. He’s a high character individual and has the required size and length to fit Philadelphia’s defense.

#JimmySays: This is the most likely option for the Eagles at 20, in my opinion, as noted a couple weeks ago.

Florida State is loooooaded with NFL prospects, and both Chip Kelly and defensive coordinator Bill Davis skipped FSU's pro day to attend UConn's to see Byron Jones. Jones is now also scheduled to meet with the Eagles at the NovaCare Complex for one of the Eagles' 30 allotted pre-draft visits (per Geoff Mosher). That is a hell of a lot of attention to give to one player.

Jones checks the boxes in terms of what the Eagles are looking for in a defensive back. He's big (6'1, 199, 32" arms, 10" hands), he's versatile, he's physical, and he's a stellar character guy, via Lance Zierlein of NFL.com:

"Team captain and leader on the field and in the locker room. Scouts say he's willing to play hurt and inspires his teammates."

He is also incredibly explosive (spider chart via mockdraftable.com).

Brian Baldinger, NFL.com: Whether it's here at pick No. 20 or through a trade, Mariota gets reunited with Chip Kelly and the Eagles keep on Ducking.

Will Brinson, CBS (Note: Brinson has the Eagles trading up to #2): Chip gets his guy through some fancy draft-day finagling. It theoretically does cost him a lot in this draft if he has to pay an expediency tax to the Browns and Titans, but the thinking here is he loves Mariota enough to push hard once draft day rolls around.

#JimmySays: Marcus Mariota isn't slipping to 20, but if you've read my stuff over the last month or so, you already know I think there's a good chance the Eagles move up to get him. A couple weeks ago, I put it at 50-50.

Chris Trapasso, CBS: The Philadelphia Ducks add another member. With Todd Herremans gone, Jason Peters in his mid-30's and a ton of offseason trade rumors about guard Evan Mathis, Chip Kelly adds a powerful and agile offensive lineman to the fold … oh, and he knows the system.

#JimmySays: It's a little bit of a reach, but I get it. Fisher was my first round pick in my Eagles-only mock draft, version 3.0. I also had Fisher as my second most likely Eagles pick if they stand pat at 20:

Fisher is listed as a tackle, but many see him as a guard. For the Eagles, he could be their "RGOTP, RTOTF," or "right guard of the present, right tackle of the future." Fisher could replace Todd Herremans at RG in the short term, and then eventually take over for Lane Johnson at RT long term whenever Johnson takes over for Jason Peters at LT.

Fisher tested extremely well at the Combine, running the best 20 yard shuttle and third best 3 cone drill among all offensive tackles competing at the Combine since 1999. Fisher would be a perfect fit in the Eagles' zone blocking scheme, and would give them sorely needed youth on an aging offensive line with no depth.

Ideally, if the Eagles liked Fisher, they could make a modest trade back, acquire an extra pick and get him anyway, but I'm not sure that's how Chip the GM is wired.

Chris Burke, Sports Illustrated: Have to give any Oregon product a slight Chip Kelly-related bump, and Armstead’s game would be an intriguing fit. He is one of several prospects generating a massive range of opinions, from top 10 down to Round 2.

#JimmySays: If this is truly the best player on the board when the Eagles are drafting, then go get him, I guess. However, if you're balancing need with the best player available, I'd prefer that player to have shown more of an impact in college than four career sacks.

Pete Prisco, CBS: Keeping Collins here since the Eagles need secondary help. He is a bigger corner who could pair with Byron Maxwell.

#JimmySays: Collins intrigued me initially because of his combination of size and athleticism, which is going to get him drafted in the first round. However, the more I've watched him, the more I don't like what I see. He may eventually become a good corner, but he could get torn up his first couple years in the NFL.

Mike Florio, ProFootballTalk: *(No explanation given on any pick, because screw you, readers).

#JimmySays: Gregory is an awesome player, and if he slipped to 20, it would be a result of his failed drug test at the Combine for marijuana. I can't fathom him slipping this far unless there are additional concerns on him, but if he's available here, hell yes, go get him. But I'd be surprised if he got out of the top 10.