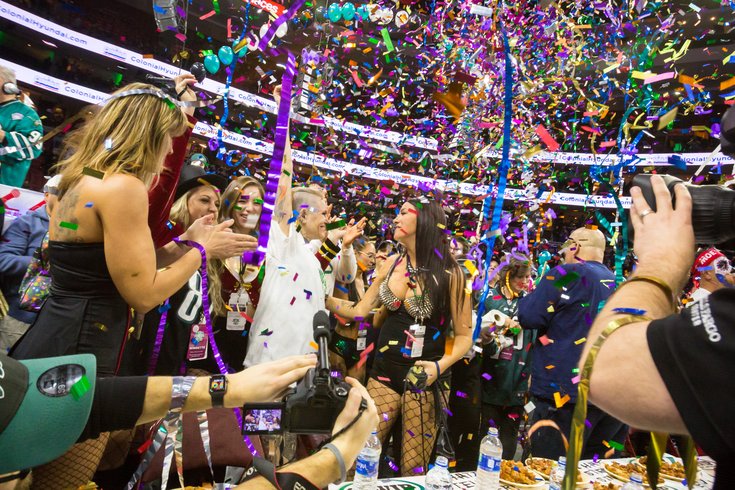 Another year, another Wing Bowl is in the books.

In front of a sellout crowd at the Wells Fargo Center, it was another raucous time in South Philadelphia, full of wingettes, food, booze and a pumped-up Ric Flair.

As for the eating contest itself, it was a three-person race between defending champ The Notorious B.O.B., two-time champ Molly Schuyler and Wing Bowl veteran Tiger Wings & Things. At least at the beginning.

Schuyler, who lost in an upset at Wing Bowl 25, entered the competition looking to not only set a new Wing Bowl record but to hit 500 wings consumed during the 27-minute eating contest. And the diminutive, 127-pound mother of four from California didn't disappoint.

In the end, it was Schuyler in a blowout. She ate a Wing Bowl record 501 wings – never seemed to slow down – on her way to her third title in the last five years.

After the first 14-minute round, those three were the only three to top 200 wings and were in a league of their own, with Schuyler setting a new first-round record of 241 wings:

And thanks to that furious pace, the winner had pretty much been decided by the end of the second 14-minute round of eating. Here's a look at the Top 5 eaters heading into the final 2-minute eat-off.

Schuyler, a Nebraska native, ate another 46 in the final round to finish with an incredible 501 wings eaten.

"I didn't think I had it," Schuyler said, adding that she just kept eating.

"I'm coming back next year with a boob job," she told the crowd before putting her Wing Bowl 26 crown on.

In the first responders category, it was Bill Boub of the Philadelphia Fire Department, who won a 2018 Harley Davidson for being the top eater in his group. But all the guys from this group were winners, as Steven Singer surprised each of the contestants with a check for $1,000 and a 24k gold-dipped rose.

Katie wins Wingette of the Year, which comes with a $5000 prize #WingBowl pic.twitter.com/iq9halM3iZ

The best procession, and a $5,000 prize from Steven Singer, went to Ice Man.

The Iceman, who looks just like Doug Pederson, enters on a float with the Eagles logo in ice #WingBowl pic.twitter.com/SMo5Mr6xse