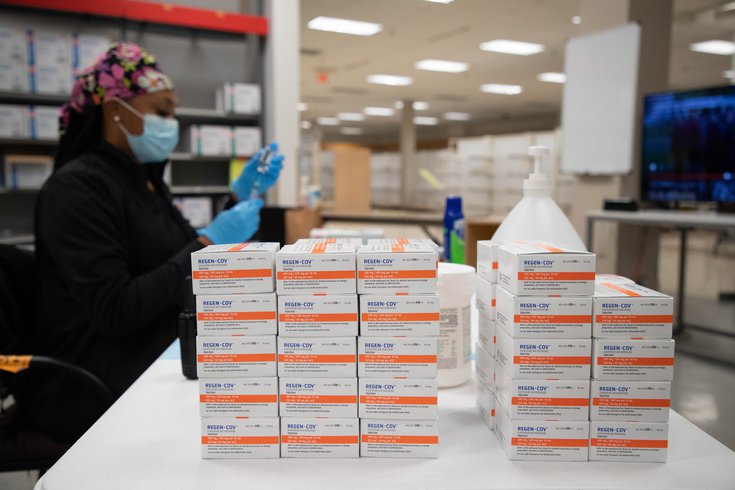 Boxes of Regeneron sit stacked on a table inside the former Sears building in Tallahassee, Florida. Pittsburgh researchers now say that injections of the monoclonal antibody cocktail could be just as effective and more efficient than IV infusions of the COVID-19 treatment.

Monoclonal antibodies, the drug cocktail used to treat patients infected with COVID-19, have proven to be an invaluable tool to limit severe disease and hospitalizations since the U.S. Food and Drug Administration authorized Regeneron's formulation last year.

Patients with a mild to moderate case of COVID-19 typically will receive monoclonal antibodies through a single, lengthy IV infusion. This method, though effective, has sometimes been difficult to implement in hospital surge settings where staffing and bed shortages may limit administration.

A new study out of the University of Pittsburgh School of Medicine and UPMC shows that subcutaneous injections of monoclonal antibodies, given in a series of four shots, could be just as effective as IV infusions in limiting the severity of COVID-19. The artificial antibodies work by stimulating the body's natural defenses, especially during the early stages of exposure and infection.

Injections not only take less time to administer, but require shorter appointments for patients and can be provided by a wider range of health care staff than IV infusions. Their use is limited by the FDA's emergency use authorization for Regeneron's monoclonal antibodies, which permits subcutaneous injection only when an IV infusion is not feasible or would lead to a delay in treatment.

In September, the Pittsburgh researchers decided to test injections of Regeneron's treatment — a combination of casirivimab and imdevimab — after encountering capacity issues during the delta variant surge. Many patients who needed the drug faced long delays or didn't receive the treatment at all. It is considered most effective when given within five days of symptom onset.

"When we began to see a surge in COVID-19 cases due to the delta variant three months ago, we realized it would be impossible to accommodate the demand for monoclonal antibodies with IV infusions," said Erin McCreary, a clinical assistant professor in Pitt’s School of Medicine and lead author on the study. "We can more than double our outpatient appointments for antibodies when using the subcutaneous route, so we began administering the treatment through injections when needed to treat as many patients as possible."

The study followed patients who received injections of Regeneron's monoclonal antibodies for a period of 28 days, comparing their outcomes to a matched population who received an IV infusion of the drug, in addition to those who were eligible for treatment but did not receive it.

"There was little to no evidence that subcutaneous administration was associated with a higher risk of death or severe hospitalization compared to IV administration, and it was associated with an estimated 56% lower risk of being hospitalized or dying within 28 days compared to no monoclonal antibody treatment," said Kevin Kip, the study's senior author and vice president of clinical analytics at UPMC. "Looking at these real-world results, I would confidently recommend that any health care provider struggling to provide casirivimab and imdevimab infusions in a timely manner switch to subcutaneous injections rather than turn patients away."

Regeneron said last month that a single dose of its antibody cocktail reduced the risk of contracting COVID-19 by 81.6% in the two to eight months after the drug's administration in a late-stage clinical trial.

However, the company cautioned that its monoclonal antibodies may be less effective against the omicron variant, which has been detected across the country.

Regeneron and other pharmaceutical companies, including GlaxoSmithKline and Eli Lilly, are working on monoclonal antibody treatments that will have improved results against both delta and omicron. The FDA also recently authorized IV infusions of Eli Lilly's two monoclonal antibodies, bamlanivimab and etesevimab, for all pediatric patients who have a positive COVID-19 test and are at higher risk for progression to severe disease, hospitalization or death.

The Pittsburgh study included more than 1,900 patients who received injections of Regeneron's monoclonal antibodies, making it the largest clinical in the world to compare different methods of administration.

"This could greatly expand available locations for patients to receive treatment, as it's much easier to give and there are more staff available to give this than with the IV infusions," McCreary told U.S. News. "We've now creatively expanded available staff to administer lifesaving therapies."