The Monthly Migraine: You never forget your first migraine 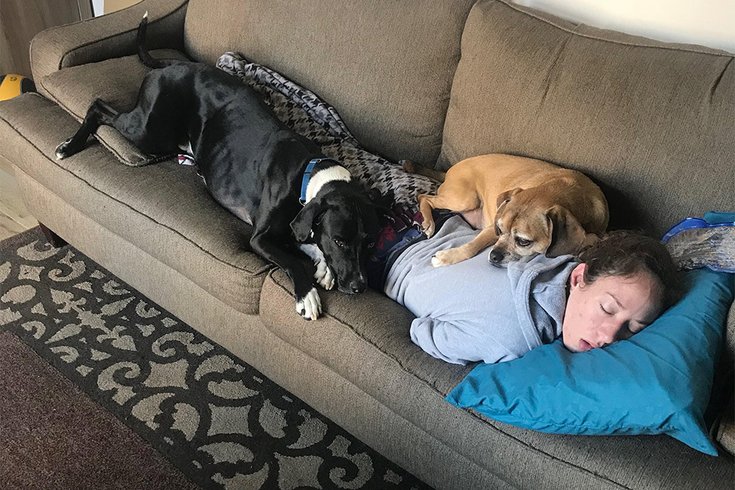 When not suffering from a migraine, the author spends her time trying to figure out why there are so many love songs about sleeping women.

I had never experienced that kind of pain before. It was a mix of blinding, throbbing and intense pressure.

To describe it now, I'd say it felt like someone repeatedly jabbing an icepick into my skull, all while my head was in a vice. This description took years to get just right, though. That first time, 15 years ago, I was so blindsided I couldn’t explain precisely what the pain felt like. All I knew was it was unlike anything I had experienced before and that I needed to lie down and occasionally throw up.

YOU NEVER FORGET YOUR FIRST

It started like any migraine. I felt a headache coming on and suddenly, I was horizontal, confused as to what was going on. I had just come back from an international trip, so maybe it was the travel stress? Did one of my seatmates pass something over to me? While my young self couldn’t pinpoint the cause, my mom knew.

“How much pop did you drink on your trip?”

“I had a few glasses every day.”

Growing up, “pop” was a once-a-week treat. (I’m from Michigan, lay off!) I relished the opportunities to drink it while my parents weren’t around to regulate my sugar intake. During a one-week trip, hundreds of miles away from my parents, I overindulged. I had no idea what caffeine withdrawals were, I just knew I really loved Cherry Coke. It kicked me in the ass later.

NO 'BUFFY' FOR LINDSAY

So, there I was, laying on the couch, trying my hardest not to puke so I could make it through a new episode of “Buffy the Vampire Slayer.”

OK, I feel at this point, I should probably add some clarification. Missing “Buffy” was a BIG DEAL for me. It was and still is my favorite TV show. Except when my migraine happened, it was 2003, and there were no streaming services, no box sets, just obsessively thumbing through the TV Guide, trying to find any reruns I may have missed during the regular season. There was no way I put myself in a situation where I would miss an episode.

After trying to watch 30 minutes of my favorite show, the migraine won the battle. I gave in and begrudgingly headed up the stairs to my bedroom. That’s not before I ran into the bathroom to dry heave. I sat with my head on the toilet and cried. I had never experienced pain this intense, this unforgiving. After I felt like I could control my nausea, I curled up into a ball and tried my best to go to sleep.

Luckily, the pain went away the next morning – unlike most of the migraines I get today. But that one Tuesday night in 2003 was a turning point for me. I started to be aware of my caffeine intake and thought as long as I could watch what I drank or had the energy to wean myself off, I would be OK.

Clearly, I wasn’t OK. I had a couple migraines here and there, but I noticed them increasing as I got into my mid-20s. No matter the setting, it was still the same, pounding pressure and constant nausea that was once alarming to 18-year-old me. By the time I was 26, migraines were less alarming and more of an unwelcome visitor.

Did I know with that first migraine that this would become an ongoing struggle that got worse as the years went on? Oh, hell no. I was 18 and my first priority was bolting from my high-school years as soon as I grabbed my diploma. But thanks to that initial experience, I knew what to look for as I began this battle. 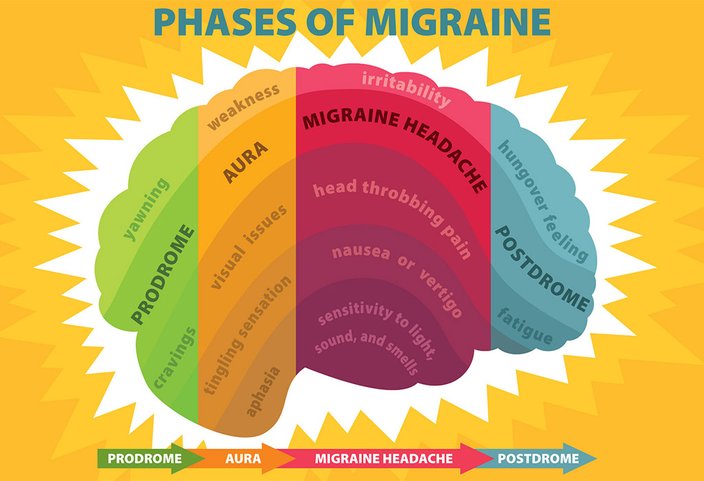 The phases of a migraine.

IS IT A MIGRAINE? WHAT TO LOOK FOR

If you’re not familiar with migraines, suddenly getting one can be scary. I mean, it still can be scary for us pros, too. If something funky is going on in your head, here are a few things to look out for:

• Some people say their migraines come with auras or fuzzy vision at onset.

• The pain can be pounding, pulsating, sharp or feel like your head is full of pressure.

• Nausea comes along with nearly every one of my migraines. There have been a few in my history where it was so bad that I could not speak without throwing up.

• There will be an increased sensitivity to light, noise and smells.

• Going through that kind of pain can be tiring. Mental and physical exhaustion can happen during, and even after, a migraine.

• A common fear is confusing a migraine with an aneurysm. The difference between the two is that migraines take time to come fully appear, while an aneurysm is often described as a “thunderclap” headache. It comes on swiftly – like a thunderclap – and is a sudden, intense pain. It can also induce seizure, blur your vision, make speaking difficult and more. If this happens, it is an emergency and you need to go to a hospital immediately.

I must make clear, however, that these tips are solely from my personal experience and are not meant to be official medical advice. My hope is that they offer insight, but if you feel like something is wrong and you need to go to a doctor, GO TO A DOCTOR! They know way more than I do.

The Monthly Migraine is a series dedicated to migraine awareness and support. If you suffer from chronic migraines, you are not alone and we hope to amplify your voice through these pieces.