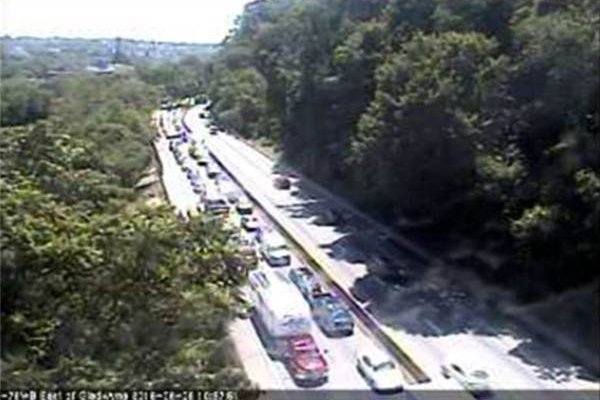 Traffic sits stopped on Monday morning in the westbound lanes of the Schuylkill Expressway after a multi-vehicle accident closed down lanes in both directions of the highway, according to PennDOT.

Emergency officials have reopened all lanes on the westbound side of the Schuylkill Expressway between Gladwyne and Conshohocken after responding to a multi-vehicle accident that occurred around 11 a.m. Monday.

The lanes were closed for a five-mile stretch extending from I-76's Exit 337 to Exit 332, according to the Pennsylvania Department of Transportation. The road remained closed for about two hours.

Arial footage taken by 6ABC.com showed a pick-up truck lying on its side, extending across two lanes of the expressway and positioned in front of a tractor-trailer. Several other vehicles also appeared to have sustained damage.

It was not immediately clear whether anyone suffered any injuries.

PennDOT also reported a lane restriction due to police activity on the eastbound side of the Schuylkill Expressway, just past mile marker 333. That also has reopened.

CLEARED: Police department activity on I-76 eastbound at Mile Post: 333.5.