A Mummer's mission: Find a kidney donor at the parade 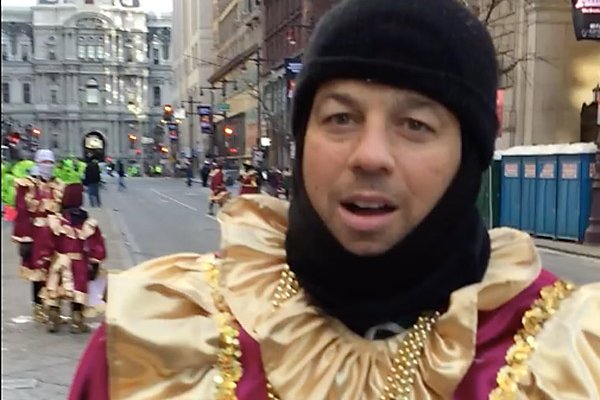 Joe Weissinger, 43, was diagnosed with membranous nephropathy several years ago and carried a sign in the 2018 Mummers Parade in search of a kidney donor.

Joe Weissinger woke up at the crack of dawn, slipped into his gold-and-red Riverfront Mummers N.Y.B. attire and got to stepping up a cold, windswept Broad Street on New Year’s Day.

What set him, his son Joey and family stand out from the noisy crowd near Broad and Walnut streets around 10:30 a.m. was the sign he held atop the baby stroller he pushed.

“My Dad Needs a Kidney,” it read in a message followed by hashtag “#Kidney4Joe.”

Say what you will about the Mummers – as many (myself included) have in a less than positive light – but adapting the celebratory feel of the parade into an awareness effort to save a life is distinctly attention-grabbing.

As his crew made its way south toward Locust (their theme: Mumming Out of Our Mines), Weissinger stopped to share his story.

Weissinger, 42, traces the roots of his quest back to a spring night in 2009 where he noticed his “feet were awfully swollen.”

“My skin was overlapping the leather straps of my flip flops. My feet and ankles looked like they were stung by bees,” is how he explained that discovery on his Kidney4Joe Facebook page and website.

His then-girlfriend, and now wife, Bridget, worked at a local hospital and got him in to see a cardiologist quickly. After a few months, the cardiologist deferred to a nephrologist upon determining it was likely a kidney issue. 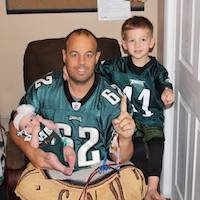 Joe Weissinger, a member of the Riverfront Mummers N.Y.B., with 4-year-old Joey and newborn daughter, Aubrie.

After a biopsy came the diagnosis: Membranous nephropathy. After several years of treatment, Weissinger’s kidneys stopped functioning properly and he was hospitalized at Jefferson with pneumonia in 2014.

Since June 5, 2014, his life has centered on dialysis which “was the only way for me to survive.”

After a year, he had to stop working and “go on Social Security.” It was just too physically demanding.

At Monday’s parade, he said that he needs a new kidney to keep that survival going, a particularly because of Bridget, 4-year-old Joey and newborn daughter, Aubrie.

“I’m finally going public with my story,” he told PhillyVoice in the middle of South Broad Street. 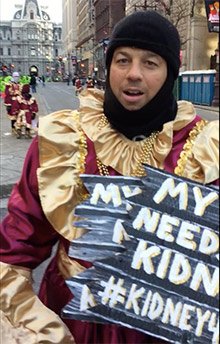 “It’s just, it’s for my kids. I just want to be there for them,” Weissinger says of his search for a new kidney.

“I thought my family would be able to get me a kidney through donation, but nobody could pass tests for various medical reasons.

“I was waiting to do a (transplant from a) cadaver just so I didn’t need to ask anybody for any help, but it didn’t work out. We have a newborn daughter so I thought it’s time to move forward and get this over with.”

If ever there’s a chance to get many eyes on an awareness-mission sign in the city, the crowd gathered for the Mummers Parade – even when temperatures tamp down the turnout – is an ideal option.

He's holding out hope that the new year will be his year.

"I hope I get a kidney and I can move forward with my family without dialysis," he posted on the Facebook page before heading to the parade route. "Happy New Year, everyone."

I asked him what it would mean if he got the kidney he so sorely needs because someone saw his sign at the 2018 Mummers Parade.

Think you might be, or know, a potential match? Weissinger asked that you get in touch with the transplant team at Thomas Jefferson Hospital.