After decades on local networks, the Philly tradition went nationwide via the Travel Channel in 1993 ... and got dropped two years later 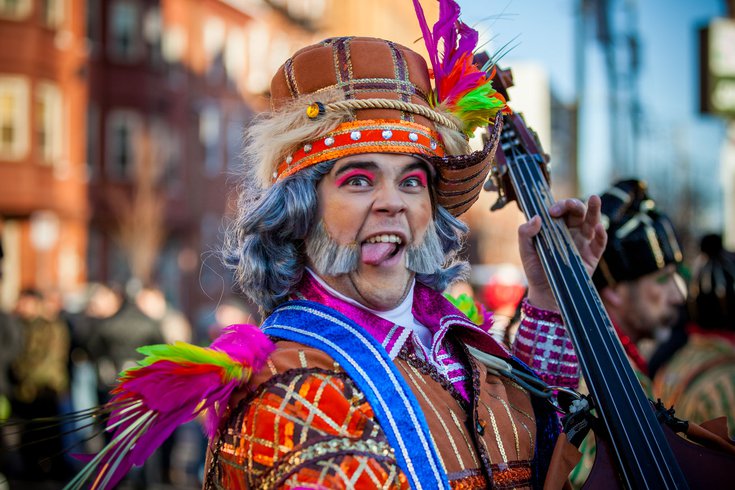 The annual Mummers Parade is usually broadcast on local Philadelphia-area stations, but for a brief run in the '90s, it got a shot on national TV through the Travel Channel. A Mummer from the 2015 New Year's Day event is pictured above.

Since the 1700s, the Mummers have ruled the streets of Philadelphia every New Year's Day.

The colorful characters were a Philly institution long before the city officially acknowledged them in 1901 with the first sanctioned Mummers Parade. Originally less of a parade and more of a collection of drunk rovers shooting guns in the air, the event became more performance-driven after the city got involved and it was organized into divisions of comics, string bands, drag performers, "fancy" marchers in costume and "fancy" musical performers (also in costume).

With the arrival of television, the annual parade turned into a regional TV event, bouncing between local channels like KYW and PHL17.

But on Jan. 1, 1993, Philadelphia shared its New Year's tradition with the world when the Mummers hit national television for the first time. The Travel Channel picked up the parade that year, airing all 11 hours of the event. Yet it pulled the plug just two years later, releasing the Mummers back to their natural habitat.

Putting the Mummers on national TV was a risky move, for two big reasons. The first? The parade has a reputation for racism, which goes back to at least the 1800s.

Blackface minstrel acts were once common enough that the former parade director, Elias Myers, moved to ban them in 1963 — only to reverse the decision after swift backlash from Mummers who picketed outside his home. Subsequent legal action from the NAACP led to an official ban on blackface, though not everyone complied. Blackface still occasionally pops up at the parade, with the latest incident occurring in 2020.

But one of the most notable attempts to ban blackface from the annual parade came in 1963…and was led by some of Philadelphia’s most prominent civil rights activists.

It would set off a chain of events that led to fears of bloodshed.

"Some portions of the parade are nice to see, such as the string bands, the gay costumes, feathers, etc," Philadelphia Tribune reader Ralph Bean wrote to the paper in 1951. "But some portions are definitely racist in character — anti-Negro and anti-Semitic."

That's not the only thorny piece of the Mummers legacy. The revelers also are known for partying hard — too hard, if you ask some. Pretty much since the beginning, parade participants and spectators have imbibed throughout the day, ranging from discreet sips from a thermos to intoxicated strutting down the street.

City officials may have been willing to look the other way when the parade was only airing on Channel 3, but the Travel Channel was available in 17.5 million homes in 1993, and Philadelphia didn't want its sloppiest citizens beamed into each of those households.

In an effort to get the Mummers ready for prime time, the organizers announced a ban on alcohol. Bleachers were built outside Jefferson Methodist Hospital and South Penn Square for families to watch the procession, the Inquirer reported, and waste management donated several porta-potties. Time limits were placed on the parade, which shaved an hour off the festivities. And for the first time in its lengthy history, Reading Terminal Market opened on New Year's Day, providing onlookers with a place to grab coffee and breakfast.

By all accounts, the hard work paid off. The Morning Call reported that the parade topped Philadelphia-area Nielsen ratings, beating out the Blockbuster Bowl between Penn State and Stanford and boasting a 25% audience increase over the previous year.

"I think it has been a while since so many people had such a good time at the parade," former Mayor Ed Rendell told the Inquirer. "It surpassed everyone's expectations."

The Travel Channel, which added "millions more" to the audience, per local reports, welcomed the Mummers back in 1994 and 1995. But their pivot to national, family-friendly prominence was short-lived. The Travel Channel backed out of the broadcast after '95, citing "uncertainty over last-minute delays and postponements," according to The Philadelphia Daily News. Alcohol also never really left the parade, despite the ban. Reports from the 1993 parade featured revelers laughing off the rule as they showed off their stash of unmarked jars and bottles — and clearly, the rule hasn't stuck. 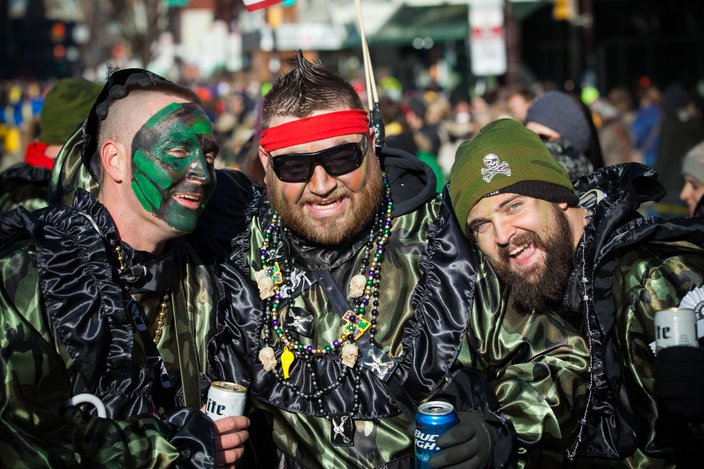 Mummers don costumes and drink beer at the 2015 parade.

Through a broadcast deal with WGN in 2009, the Mummers got another shot at national TV, sort of. The network aired a severely edited, two-hour version of the parade that focused on the string bands. It came back in 2010, but hasn't returned since.

Nowadays, the the parade is once again an exclusive Philly television event — though even that's changing a bit this year. The Mummers announced earlier this month that, for the first time since their 1993 broadcast, PHL17 will not air the parade. It will be broadcast instead on MeTV, or Channel 2, where you can watch a full day's worth of music, merriment and, of course, Mummers.