A collaboration with Pottstown distiller Kiki Vodka, cocktail is the latest spiked tea with a regional theme 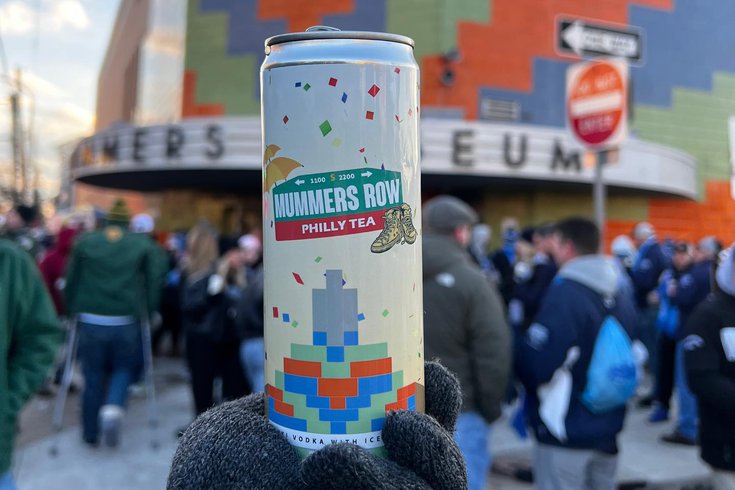 The Mummers and their fans now have an official drink to sip ahead of the annual New Year's Day parade.

The costumed strutters teamed up with the Montgomery County distillery Kiki Vodka last month to create a canned cocktail for the 2022 festivities. The resulting Mummers Row Philly Tea is a 100-calorie blend of iced tea and vodka that recalls the locally famous Fishtown Iced Tea, minus the carton of Arctic Splash.

"We're big Mummers fans," Steve Melick, an investor in Kiki Vodka, said Thursday. "We've got family who march with the Mummers (and) we've known people in different Mummers clubs over the years ... I don't think you can grow up in Philly and have never been to a parade. It almost seems impossible."

Melick said the tea has been a "very fast project." Talks with the mummers began in November, with cans of Mummers Row hitting bars during the first week of December. Now, he says, they're "blitzing the market" with the stuff, distributing the hard tea to roughly 100 bars across Bucks, Berks, Montgomery, Chester, Delaware and Philadelphia counties.

The 12-ounce can design features a rendering of the Mummers Museum's Tetris-like exterior with lots of confetti, yellow umbrellas and a pair of golden slippers. The drink's name is printed on a Philadelphia street sign, recalling the actual Mummers Row on South Second Street, which is also the location of parade's afterparty, known as the Two Street Parade.

Kiki Vodka plans to continue making and marketing the tea past the holiday season, but distribution plans have not been formalized. New flavors or products are a possibility next year, but for now, Melick said, "we're just trying to keep our heads on straight."

Spiked teas are big business in the Philadelphia region. Interstate Drafthouse, the makers of Fishtown Iced Tea, released its own 12-ounce can earlier this year, just months before the makers of Arctic Splash iced tea discontinued their cartons of that un-spiked beverage. Stateside Vodka also has its own take, while the Jersey Shore was represented in the trend this year with Sea Isle Spiked Iced Tea and Cape May Brewing's Shore Tea, a collaboration with Wawa.