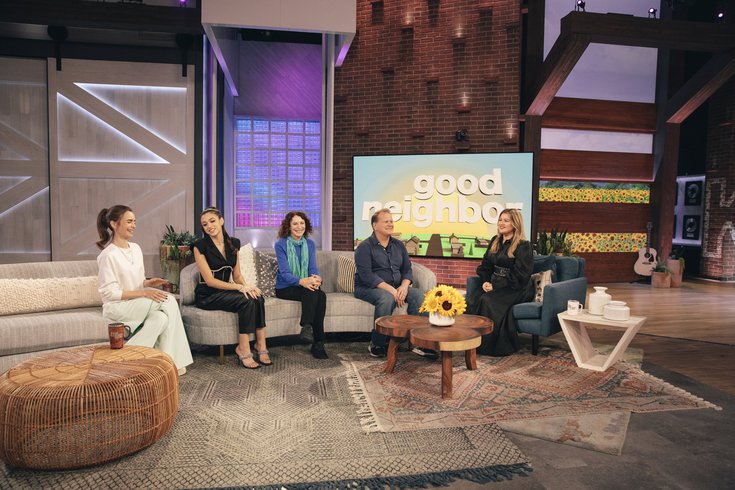 Mural Arts Executive Director Jane Golden and Color Me Back participant Norman Bonk joined a panel of guests on The Kelly Clarkson Show on Wednesday to discuss the social services program, which provides those experiencing economic insecurity the opportunity to earn wages for making art in collaboration with the nation's largely public arts program.

Mural Arts Philadelphia has completed thousands of projects since its inception in 1984, contributing to the development of different communities across the city along the way. The center has since gone on to become the largest public art program in the United States.

Back in 2019, Mural Arts began the Color Me Back pilot program – a same-day wage earning initiative organized to help residents who were experiencing economic insecurity. The participatory art program was expanded following its initial projects along the Suburban St and Walnut St. SEPTA Concourses.

Executive Director Jane Golden and participant Norman Bonk were invited to The Kelly Clarkson Show recently to discuss the program and its impacts on the lives of unhoused residents in Philadelphia.

Golden explained that the Color Me Back program began through a longstanding partnership between Mural Arts and The Department of Behavioral Health. She and other members of the program met to discuss how they could take the same-day work program model from other cities and adapt it for the creation of public art.

She said that Mural Arts calls the program "Color Me Back" because the art they're creating is bringing people "back to life."

Participants earn $50 per day and can stay with the program for a week at a time, working on small murals and then eventually moving on to larger ones.

"It's a crisis, homelessness," Golden said. "But it's not a crisis center, what we're doing. You feel the therapeutic value of it. We have peer specialists from the Department of Behavioral Health, and they're going around talking to people, asking them what they need...and providing them with those services."

They also work with online educational program CareerLink, because they want the program to be a pathway to employment for each of the participants.

Norman Bonk began working with Color Me Back while living as a homeless, HIV-positive man sleeping in the subway, where he would eventually paint a mural as part of the program.

He told Clarkson and the panel that he originally did not believe that a program like Color Me Back existed, where unhoused residents could earn money per-day just for making art. But when his number was picked in one of their lotteries, he was able to begin working with them.

Following his work with the program, Bonk was hired on part-time with Mural Arts and is no longer homeless. He now provides guided tours of Color Me Back projects, and talks about his journey since beginning with the organization.

He particularly enjoys showing people the "Lovely Day" project that appears on columns of the SEPTA Concourse along the Broad Street Line between City Hall and Walnut St. 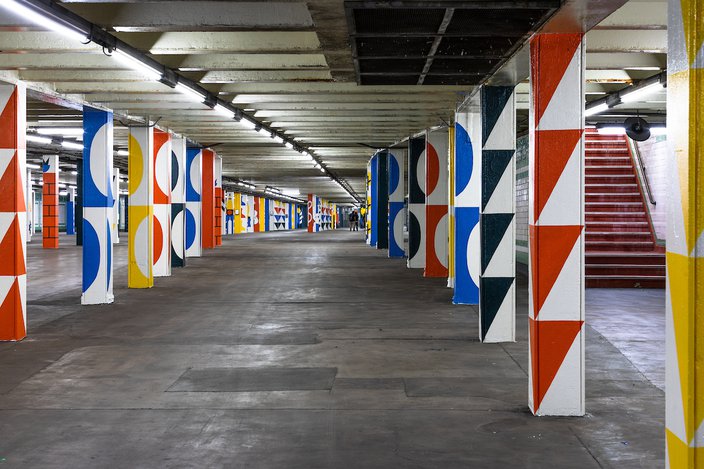 "Mural Arts is dedicated to making sure that every citizen everywhere has access to art," Golden said. "Art is like oxygen – I like galleries and museums, but art doesn't have to be behind those walls exclusively."

The initial participants in the program were recruited through outreach initiatives around the area surrounding Suburban Station in Center City, with daily lotteries for participation at LOVE Park. Each day, between 80 and 100 people would arrive to participate, though only 20 people were chosen at a time.

At the end of the broadcast, The Kelly Clarkson Show, in collaboration with SkillShare, presented Mural Arts Philadelphia with $20,000 to expand the program and provide additional opportunities for unhoused residents of the city.

Bonk and Color Me Back will continue to offer tours of the art projects throughout 2022. The full episode of The Kelly Clarkson Show is available here.