Woman to Muslim woman at Bucks County amusement park: 'Go back where you came from' 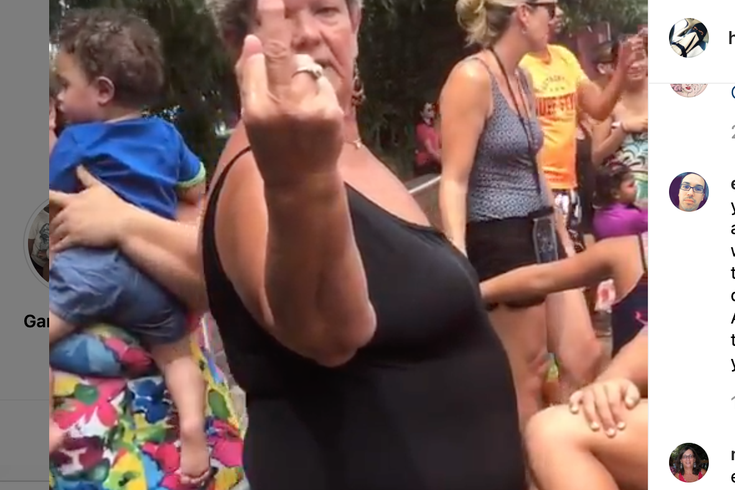 The woman seen in this video still turned confrontational while being filmed at Bucks County's Sesame Place Amusement Park after allegedly telling a Muslim woman to "go back to where you came from."

A woman turned confrontational while being filmed at Bucks County's Sesame Place Amusement Park after allegedly telling a Muslim woman to "go back to where you came from."

Zafirah Moore, who is a Muslim woman and told CBS3 she was born and raised in West Philly, posted video she recorded of the incident on Instagram on Tuesday. The video was quickly shared online; as of Wednesday afternoon, the video had more than 4,400 views.

In the video, an unidentified woman gives Moore the middle finger, uses profanity in multiple instances, and eventually turns aggressive, attempting to either take Moore's phone or knock it out of her hand while shouting, "Don't take pictures of me."

You can watch the full video below:

Today I got told to go back where I came from 😂😂😂

"Her response was 'b**** f*** you and go back to where you came from'", Moore's cousin wrote in a post Tuesday. In the video seen above, the woman uses the same language.

Moore's cousin also said park authorities at Sesame Place "attempted to treat [her] family as the aggressors". She said the park asked the woman seen in the video to leave, but gave her tickets to return at a later date.

On Wednesday, Sesame Place posted a pair of statements in the comments section of its official Facebook page:

"Sesame Place only welcomes respect for others and does not tolerate this type of behavior. The guest depicted in that video was promptly removed from the park and will not be permitted to return. Creating safe and enjoyable experiences for all guests is our top priority.

"Our team deeply regrets that any park guest would have this experience in our park. It runs counter to everything we stand for. To be clear, the guest depicted in that video was not given tickets and will not be permitted to return to the park."