My strategies for successful naps and sleeping through the night 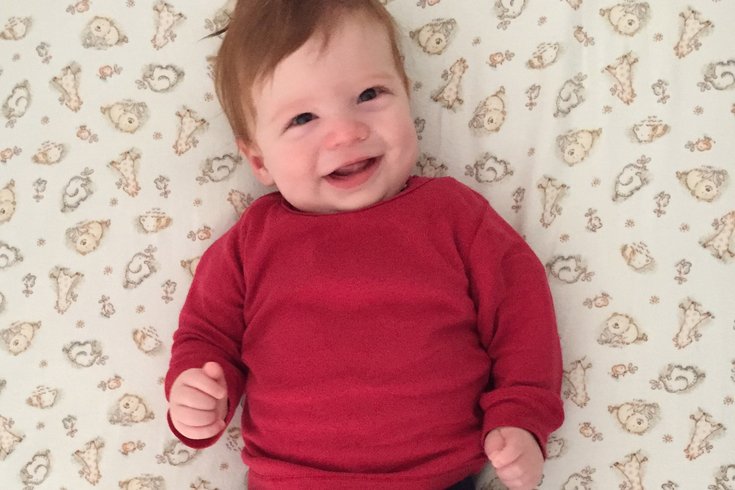 Killian is a happy boy after waking up from his morning nap. After Katie set a nap time schedule and routine, her son is sleeping better during the day and through the night.

Getting your baby to sleep is something many parents find to be a struggle. Sleep is so vital to a baby’s health, growth and development. It can be a major source of stress for a new parent if your little one is fighting naps and bedtime. I know it was for me.

Within the first couple weeks of Killian’s life, my baby boy was sleeping six straight hours each night. There were some nights that he did not do as well, but generally, he would sleep from 10 p.m. until 4 a.m. After hearing about infants waking every two hours to feed, I was overjoyed that he (and I) were sleeping for several hours straight right off the bat.

When people would ask, “How is he sleeping?” I would triumphantly reply, “Great!” I was proud of my baby boy that his nighttime sleeping was going really well for us. But once he hit about 4 months old, I was less triumphant. Killian started having some sleep regression and would wake up crying at midnight or 2 a.m. and then again for his usual 4 a.m. feeding.

The only way I could get him back down every time he woke was to nurse him. When my parents baby-sat while my husband and I took a vacation in Florida, they reported that he slept eight hours straight, but as soon as he was back home, he returned to his normal sleep schedule. I started to wonder if my baby would ever sleep through the night?

Ever since Killian was a couple of months old, my mother encouraged me to move him out of my bedroom and into his nursery. She was convinced that he would sleep through the night if he was in his own room. But I refused because of my fear of sudden infant death syndrome (SIDS). The American Academy of Pediatrics recommends that parents room-in with their babies for at least six months to reduce the risk of SIDS by as much as 50 percent. As far as I was concerned, Killian was going to stay right next to our bed until he hit his first birthday.

At his recent 6-month checkup, our pediatrician told my husband and me that Killian should be sleeping 10 to 12 hours straight through the night by now. “I know!” I quickly snapped back, feeling like a failure. “Move him into his own room,” our doctor said. “You should have done that months ago!” That night Killian’s crib was moved into his nursery, and within two days, he was sleeping 12 hours straight.

Getting baby boy to sleep through the night was a minor challenge compared to naps. Naps were an all-out war. When he was a newborn, we waited for Killian’s cues to show us that he was ready for a nap. He would yawn or rub his eyes, and I would put on some lullabies and put him down. And then the crying would begin. The wailing. The relentless fight against the nap.

At first, I could not bear to listen to him scream, so I would pick him up, nurse him, soothe him and put him back down. He would start crying before his head was back on the mattress. After he was out of the newborn stage, I started letting him cry it out a little bit. I would stand at the door, out of sight, listening to him and looking at my watch. I would give him 20 minutes before I would go in, soothe him and try to put him down again. My goal was a morning and afternoon nap every day. Sometimes we had success; most often we did not.

After doing some research and reading, I decided to set exact times for Killian’s naps: 10 a.m. and 2 p.m. Every day, no excuse. I learned that routines are so important to little ones, and by waiting for Killian to show me that he was tired and choose his own nap time, I was setting us up for failure. At first, he still cried and struggled against the nap. Slowly but surely, he became familiar with the routine and now goes down for every nap like a dream. The days of him boycotting naps are long past.

When baby is not sleeping, it means that parents are not sleeping either. Having a baby can be hard enough, but life can feel impossible if you and your infant are not getting enough rest. Here are some things that worked for my son that may work for you:

1. Talk to your pediatrician. Trust the expert! Your baby’s doctor is your best resource for everything regarding your baby. I would have kept Killian in our bedroom until he was a year old, but I am so glad I followed doctors’ orders.

2. Set a nap time routine. Naps at 10 a.m. and 2 p.m. work really well for my baby boy. Even if he does not fall asleep immediately (he usually does), he has learned that these are quiet times in his crib for him to rest. I always play the same lullabies and close the curtains so the room is not too bright. If errands need to happen around nap time, I go at 10 or 2 so he falls asleep in the car. But I do not do this often because it is best for him to sleep flat on his back.

3. Set a bedtime routine. Killian’s dinner is at 6:30 p.m. followed by his bath, pajamas and bedtime story. He is in his crib by 7:30 p.m. We put him in a sleep sack for bedtime. In his room, he has a night light sound machine that plays lullabies. I have learned that consistency is key.

4. Seek out a sleep coach. When I was researching online for advice, I discovered that there are sleep coaches who specialize in babies. Whether you simply read their recommendations or hire them to come into your home, sourcing guidance from another expert can really help.

5. Talk to other parents. My mom is my go-to source for parenting tips and tricks, and I have talked to lots of mothers about sleep training. Hearing their thoughts and sharing our stories makes stressful times as a parent a little easier.

Is your baby sleeping through the night? Does he have a love/hate relationship with naps? What are your tips and tricks? Share with me and other parents in the comments section below or tweet me @ThePhillyVoice and @KathleenEGagnon.