Mystery of the 'creepy unmarked helicopters' has been solved 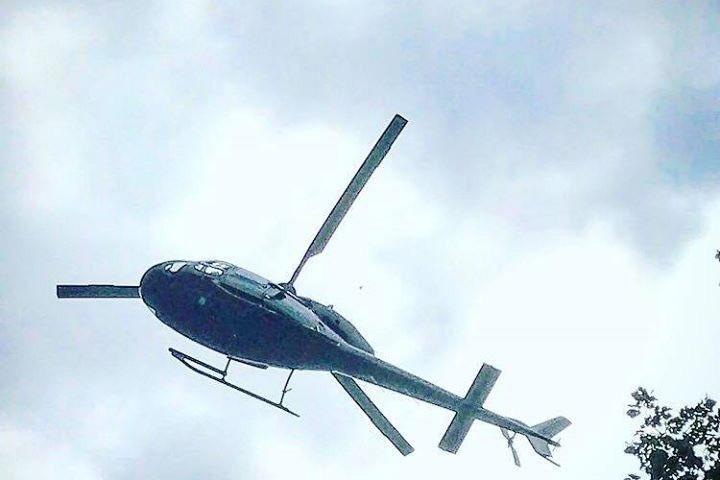 In the past 24 hours, the drama surrounding the low-flying, menacing, unmarked helicopters has widened, but I can formally state that we have found some answers for you all.

On Tuesday, we brought you the story of a Mt. Airy man’s concerns about choppers mysteriously appearing on a flight path “low enough for someone to rappel down.”

As it turns out, he was not alone in thinking this dynamic was, in a word, creepy.

Some provided theories and information that laid to rest any need to fear those unmarked helicopters overhead.

It started with an email from a gentleman who works just outside the city limits near Chestnut Hill.

He included a May 4 notice circulated at his workplace reading, “The helicopter everyone is seeing today buzzing around tree-top level is the power company. … There is nothing to worry about and if you search your memory banks, you will remember they did the same thing last year around the same time.”

He also noted that he saw a similar helicopter this past Monday.

Less than two hours later, a man who works at the Cira Centre chimed in with the caveat that he would rather remain anonymous.

He noted that he saw the same helicopter from the photo accompanying the story “flying very low photographing the high-tension electrical wires along the ‘High Line’ freight railroad tracks that pass near Franklin Field, behind the Drexel office building (former Bulletin newspaper HQ), just north of the Cira Centre at 2929 Arch St., then proceeded up towards the zoo.

“By using binoculars, it was very apparent that the helo had a photographer with a long zoom lens taking pictures (the side door was open or removed) of the electrical wires. Sorry to disappoint everybody, but there isn’t anything nefarious here!” 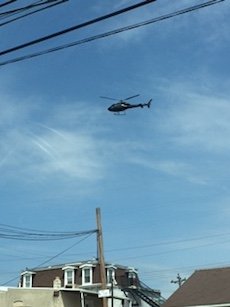 A low-flying helicopter as seen from the ground in Prospect Park, Delaware County.

Other readers wrote in to declare they saw the dark-green helicopters in places including:

• Wayne Avenue and Washington Lane (“There was a guy sitting with his legs dangling over the side taking photographs.”)

• “Hovering over the train tracks over Rt. 420” in Prospect Park, Delaware County

• Elkins Park, Montgomery County ("No one seems to have any answers other than, 'It's probably Amtrak checking out the tracks.'")

• Tacony (“It was flying so low I thought it was going to land on the softball field on Keystone Street.”)

• Pennsport ("There were no markings. It weirded me out.")

• Germantown (“After hovering for 20-30 minutes, they disappeared and then came back a bit later. Both times they coincided with a train, so I thought it might be something about the tracks or the train.”)

There were many more sightings, but rather than list them all (many of which can be seen in this Facebook thread), let’s delve into answers and questions that have surfaced amid this onslaught of helicopter chatter.

An anonymous law-enforcement source from Northwest Philadelphia noted that the same chopper was overhead last month, and that they were told “it was CSX Railways inspecting the tracks.”

A SEPTA employee who asked to remain nameless so neighbors didn’t know he or she worked for the agency did some digging around internally. In doing so, high-ranking engineers said it had nothing to do with SEPTA.

For the official record, SEPTA spokesman Andrew Busch also did some digging.

“We were notified by Amtrak that they would be sending out helicopters for rail inspections, so if residents saw them in the area of train tracks, that is likely the reason,” he said. “Part of the SEPTA’s Regional Rail system operates on Amtrak-owned tracks. It seems like these are scheduled on regular basis by Amtrak.”

Word from Amtrak derailed that theory to a certain extent.

Asked whether he knew if that’s been happening of late, he deferred questions to the utility companies themselves.

Around 1 p.m. Wednesday, PECO spokesman Greg Smore offered answers that will put this issue to rest. He said:

Yes, we do helicopter patrols of transmission lines and related equipment on a regular basis.

Yes, people are taking pictures from those helicopters.

Yes, we were doing so in and around the area on good-weather days last week.

“It gives us different vantage points so we can document any conditions of concern and relay it back to the repair crews,” he said, noting vegetation overgrowth is part of what they’re seeking. “We do this annually along 1,000 miles of lines in PECO’s service area.”

So, there you have it, friends.