Investigation: What's up with the creepy unmarked helicopters 'menacing' a Philly neighborhood? 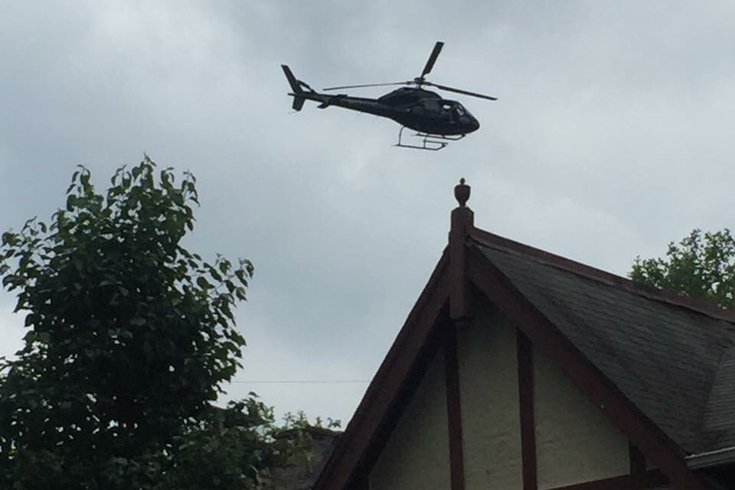 As this media market’s wokest journalist as it pertains to chemtrails, flat-earth theories and the like, I get a lot of (what many people besides me would call) unusual story tips and questions regarding curiosities and threats to our collective way of life.

And so it came to pass last week when a local gentleman on Twitter reached out via direct message imploring me to investigate something that drew his concern.

LATEST: Mystery of the 'creepy unmarked helicopters' has been solved

“I think you should do a story on the mysterious, low-flying, unmarked helicopters that have been menacing Mt. Airy recently,” he wrote. “They’re low enough for someone to rappel down. Creepy and pretty unsafe, in my opinion.”

To be sure, the trio of photos he provided featured mysterious, low-flying, unmarked and menacing choppers that were close enough to the ground for someone to rappel down.

I had noticed them overhead in my neighborhood, East Falls, of late as well. They made me uncomfortable, too. As such, it was something that was worth looking into.

Sure, there was that whole Department of Environmental Protection anti-biting gnat larvicide spraying effort last week. It came as close as the City Avenue Bridge, which isn’t in Mt. Airy and, though close to East Falls, not close enough to convince me the images were those of a Vecotac 12AS-spraying chopper.

To prove that this wasn’t an off-the-books FEMA operation, I reached out to the Federal Aviation Administration’s Eastern Region headquarters in an attempt to glean some information.

“The FAA is aware that there were helicopter operations conducting utility inspections in the Mount Airy, PA area on June 14,” she wrote in an email which is now part of the public record. "That is all the information we have."

She further confirmed that "Mount Airy, PA" was in reference to Philadelphia's Mt. Airy neighborhood.

I want to believe that there's nothing unsavory going on here, and it's probably easier to check out electrical and phone wires from above (but not too much above). I took this update back to the initial tipster though on Monday afternoon. And what did he say?

I couldn't have emojied it better myself.

In any event, do you have information about the low-flying helicopters that contradicts the official version of events? By all means reach out via through Facebook, Twitter or email. You're anonymity is guaranteed.