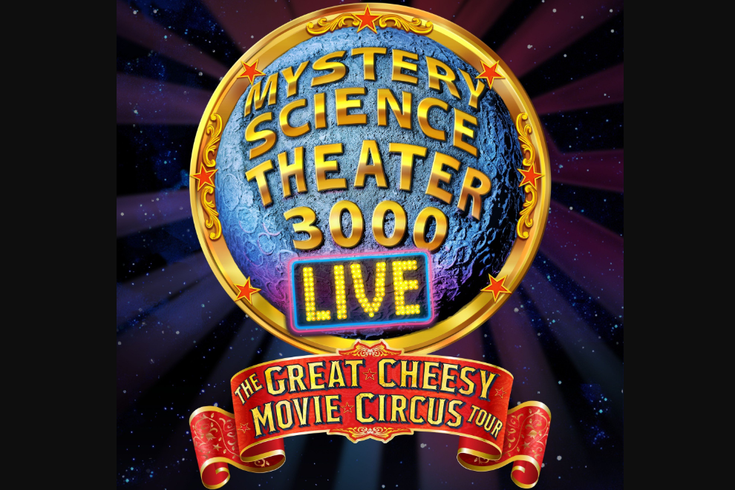 "Mystery Science Theater 3000 Live: The Great Cheesy Movie Circus Tour" is at to the Merriam Theater on Friday, Oct. 25.

There have been few cult entertainment phenomenons like "Mystery Science Theater 3000."

Mystery Science Theater got its start back in 1988, when comedian Joel Hodgson came up with an idea that would marry his comedic skills with his interests in robots and science fiction.

He pitched Jim Mallon, who worked at a tiny UHF TV-station in Minneapolis, on creating a show that would make use of the station's extensive library of Z-grade, old movies.

Over the years, MST3K, as it has come to be known among fans, has produced more than 200 episodes, a feature film, and numerous tours, the latest of which is coming to Philadelphia for a show Friday, Oct. 25, at the Merriam Theater.

The show is part of the "The Great Cheesy Movie Circus Tour," which represents Hodgson's farewell to performing live on tour.

Hodgson talked last week about the new show, the many incarnations of the franchise, and why he's stepping away from live performing.

While Hodgson is a native of Wisconsin, started MST3K in Minneapolis and has lived in Los Angeles, he's made his home in the Philadelphia area for about a decade. His production company, Alternativersal Productions, is located in Doylestown, Bucks County, where Hodgson and his team built a workshop to prepare for the current tour.

His wife is a native of the area, and Hodgson's Twitter account frequently references WMGK and other local touchstones. He's also a regular presence at Blobfest, the annual celebration of another cult classic, the movie "The Blob," that's held each summer at Phoenixville's Colonial Theatre.

Actor Jonah Ray played the lead role on the recent Netflix seasons and tours, but Hodgson decided this year to resume the part himself – and make it his last tour ever.

"I'm 59 – it takes so much maintenance to do the road for a guy my age," Hodgson said of his decision to step away from live performing. However, he plans to remain in charge of the franchise in a creative role going forward.

While MST3K tours, including the "Watch Out For Snakes Tour" two years ago, have traditionally made their Philly stop at the Keswick Theater in Glenside, this one will hit the larger Merriam Theater, in Center City.

"Getting to go downtown to the Merriam is really exciting for me, and really fun. We're really happy to be there," he said.

Some past MST3K live shows have kept the movie at the center of the comedy of a secret in advance, Hodgson is letting everyone know the film for the Philly show is "No Retreat No Surrender," the 1986 Karate Kid knockoff that starred Kurt McKinney and Jean-Claude van Damme.

"The way we stage the show is completely different," Hodgson said. There are new puppets, and other new staging techniques, and "I felt like I wanted to crack a style that we could keep using for a long time to come."

The Mystery Science Theater franchise has been around for three decades, and Hodgson described the audiences as a pretty even mix between old-school fans and newer enthusiasts.

The premise of "Mystery Science Theater 3000," as described in its theme song: "In the not too distant future," Hodgson's character of Joel Robinson is a janitor, whose bosses dislike him, so they send him into space aboard The Satellite of Love. Accompanied by his robot friends Crow T. Robot and Tom Servo, they watch one cheesy, old movie per episode, riffing on flicks throughout and their silhouettes appearing in the bottom right corner of the screen.

The series has continued for more than 30 years, jumping from Comedy Central to Sci Fi Channel. Hodgson, who had left the show many years earlier, revived it in 2015 with one of the most successful Kickstarter campaigns in history that led to a pair of new seasons on Netflix.

Hodgson, following the current 90-city tour, plans to work on a musical project unconnected to the show. He isn't sure if there's going to be another TV season of MST3K, the show, he said, "always jumps platforms and moves around." In fact, there are already plans for a holiday-themed tour in 2020, based on the robots' mockery of 1964's "Santa Claus Conquers the Martians."

"My whole goal with bringing back the brand was to show that it could work, that it could still function and was still valid," Hodgson said of the comeback, which like the series itself has endured for years.