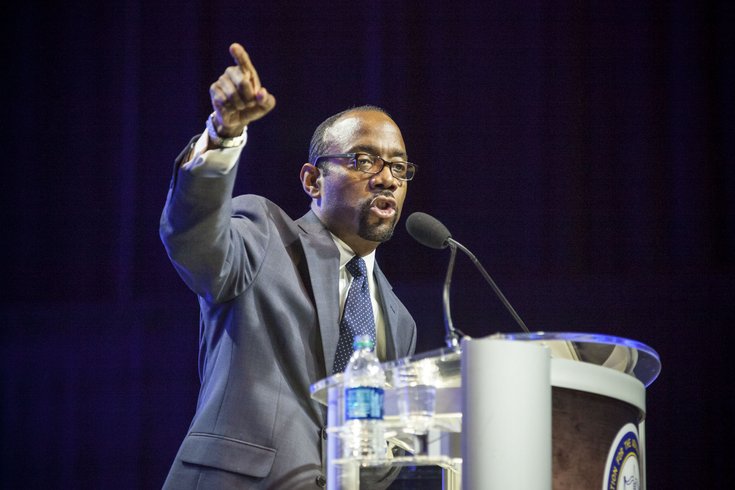 "Martin Luther King once described America in terms of a promissory note," Brooks said while serving as the keynote speaker during the convention's first plenary session Monday. "Here we stand in Philadelphia, the city of the Constitution, waiting, trying to determine whether our promissory note as citizens will be redeemed."

Brooks compared the NAACP to the ancient Israelites on their journey to the Promised Land. Upon reaching their destination, the Israelites sent a team of scouts into the land. The majority of the scouts returned telling of giants who could not be conquered by a people the size of grasshoppers. A smaller number acknowledged the giants, but remained confident they could take the Promised Land.

"Here we are in Philadelphia, edge of the promised land, with the promissory notes, (and) civil rights challenges from one end of the country to the other," Brooks said. "We have the majority suggesting we are confronting giants. ... We are giants."

Racial issues have dominated national headlines during the last 12 months. Police-involved killings of African Americans have sparked protests across the country. Riots broke out in Baltimore, the home of NAACP headquarters, following the death of Freddie Gray, a black man killed while in police custody.

Less than a month before the NAACP's convention began, an alleged racist reportedly gunned down nine victims holding a Bible study at an Emanuel AME Church in Charleston, South Carolina. Outcry in subsequent weeks prompted the removal of the Confederate flag from the South Carolina capitol building on Friday.

Brooks said the NAACP has witnessed more civil rights challenges in the past year than "in quite some time" but said the NAACP is "built for this moment."

Beginning Aug. 1, the NAACP will march from Selma, Alabama to Washington to commemorate the 50th anniversary of the Voting Rights Act. The march was inspired by those who marched from Ferguson to Jefferson City, Missouri after a grand jury decided not to indict Ferguson police officer Darren Wilson for the fatal shooting of Michael Brown.

The delegates gave Brooks as standing ovation as he left the stage.

"The president's speech was every bit on point," said Ronald McCray, of New Jersey. "There is such an in-depth level of understanding that truly needs to be heard and understood."

Marilyn Blakely, of Virginia, said everyone around her was on the edge of their seats, saying Brooks remarks were "almost surreal."

"It was as if it came from another realm," Blakely said. "I sat there feeling truly blessed to be able to hear it and felt moved. I didn't want it to end."