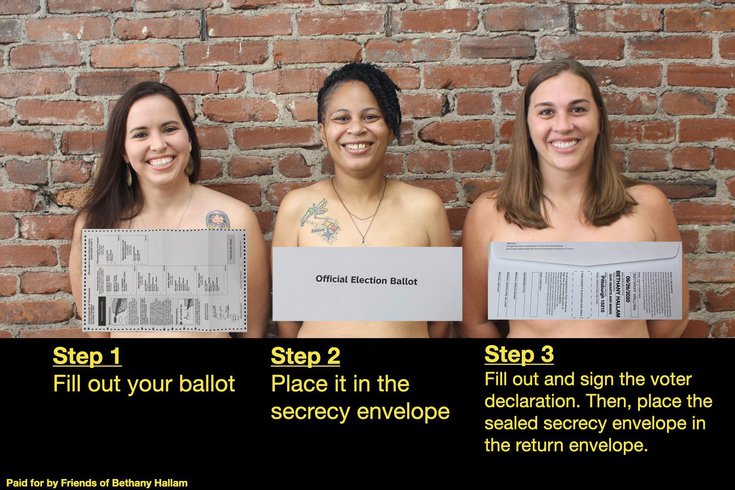 A group of Pennsylvania lawmakers are stripping down to ensure that voters properly submit their mail-in ballots ahead of the Nov. 3 presidential election.

Concern has grown over the past week about the potential for thousands of so-called "naked ballots" to be disqualified as a result of a recent Pennsylvania Supreme Court ruling.

Mail-in voters are required to enclose their ballots within two envelopes, including a secrecy envelope, in order to maintain anonymity. Ballots that are received with only one envelope will not be counted.

With Pennsylvania shaping up to be a decisive battleground state in the presidential race, Allegheny County Councilwoman Bethany Hallam launched an outreach campaign featuring elected officials in the nude.

Desperate times call for desperate measures! So your favorite elected officials got naked so that you remember to make sure that your mail-in ballot is NOT submitted without its secrecy envelope!! #nonakedballots #dressyourballot pic.twitter.com/bQXaQRHj0j

Joining Hallam in the first round of the campaign are Allegheny County Council member Olivia "Liv" Bennett and state House of Representatives candidate Emily Kinkead, who's running for the 20th district seat in Allegheny County.

"There’s a lot misinformation going around about mail-in voting," Hallam told TribLive. "It’s brand new. Most voters, this is the first time they’re ever voting by mail. I reached out to my friends who are elected officials, as well, and I was like, ‘Hey, I have this wild idea. Let’s get naked to try to save our democracy.'"

Reactions to the the edgy photos have ranged on Twitter.

I just love everything about this.

- It's just so adorable
- It went viral like it what supposed to
- It's radical & freeing to see the naked female body used like the male one: not to be sexy, but for laughs.

Republican politicians: “Let’s retain this pointless rule for PA’s mail-in ballots, and hope that Democratic voters forget to follow it when they vote by mail, so we can toss their votes.”

Thanks for keeping me abreast of these voting regulations.

And this is the crowd that thinks @RealDonaldTrump is vulgar? Really?

So looking forward to confirmation of #ACB as our next #SupremeCourt Justice. https://t.co/AfML9NWLVU

Who do I know that can make this go viral? Let’s talk about proper voting protocols AND women’s sexuality in public service. I am so here for it. And for onlookers, I’m a huge fan of @bethanyhallam @emily4pa20 and @LivFor13 ✊🏽 https://t.co/YgKKcBMHo2

Hallam had an interesting journey to becoming an Allegheny County Councilmember. She is open about her recovery from opioid addiction and previous run-ins with the law, which occurred during a period when she was living out of a car and squatting.

As she worked on achieving sobriety, she was supported by local Democratic officials who encouraged her to become active in local committee work. She was elected to Council last year.

It doesn't appear that a change to that rule is coming, so Hallam and her colleagues will be getting naked to get the word out.