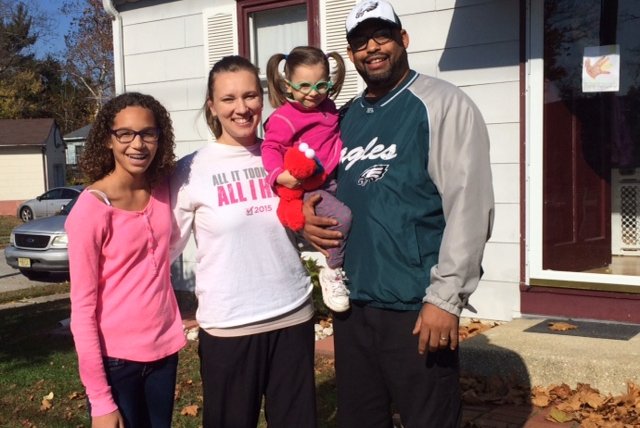 As part of National Adoption Day in Camden County, the Boykins will increase their family's size by one. Pictured are Raina, Jessie, Christine and Kevin. The Boykins fostered Christine, who has a rare genetic birth condition, as a prelude to her adoption. Camden will complete adoptions for more than 20 families and for 26 children at a luncheon Friday.

Christine becomes a member of the Boykin family of Lindenwold in South Jersey at noon Friday.

She'll be the 34th child fostered by the Boykins in the past five years, but the very first they have adopted.

Christine and her new family will complete the adoption with more than 20 families – adopting 26 children – at a noon luncheon at the Camden County Office of the Surrogate, 600 Market St., Camden.

“It will be a roomful of loudness, balloons – she doesn’t like balloons – and too many people,” said the two-year old’s adoptive mom, Jessie Boykin, laughing and shaking her head about the happy mayhem during an interview Thursday.

One of the Boykins' natural children, Raina, 12, looked on at the hubbub in the living room. The Boykins’ two other biological children, Ben, 14, and Sam, 9, were at school.

Upstairs, the family’s 35th foster child, whom they are not allowed to identify by name, was napping.

Christine was placed with the Boykins because her birth parents had neglected her medical needs and she had failed to thrive.

Christine was at least 10 pounds underweight when Jessie and Kevin Boykin became her foster parents in April 2015. She is now fed a constant diet of PediaSure via a small tube inserted into her stomach. 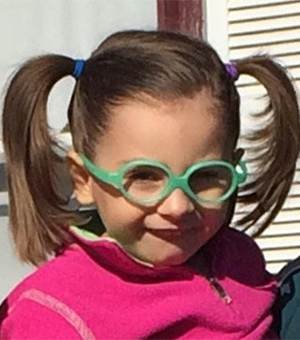 Little Christine officially joins the Boykin family of Lindenwold as part of a mass adoption ceremony on Friday afternoon in Camden County.

Christine was born with a genetic disorder so rare, there are just six other children in the world identified as sharing the same gene mutation. So far that the condition has no name – and no prognosis.

She’s now a part of an international medical investigation at Children’s Hospital of Philadelphia, hoping to understand and better address the condition which makes normal digestion impossible and has vision, speech and learning impacts as well.

And while that sounds daunting, the Boykins have experience with fostering. The majority of those children have had some special issues.

Jessie said at least 80 percent of the infants she’s cared for had health issues because their birth mothers were drug-addicted.

And she said better than half of the older children have had medical or behavioral issues – or both.

The Boykins, who met at a Camden nonprofit and knew they wanted a large family, underwent 27 hours of training to become foster parents.

There is a home inspection once a year and a more detailed re-investigation of all aspects of their lives every three years.

Sometimes the stays of foster kids are just a few days. Before Christine, the longest placement was nine months.

The point of fostering is to love them while they are with you and then let them go, Jessie Boykin explained.

"What could be more important than matching a child with loving parents inside a stable home?” – Camden County Surrogate Michelle Gentek-Mayer

But from the outset, Christine was fostered to the Boykins with the understanding they were willing to adopt her; she’d been fostered twice before in situations which did not work out well.

This time, New Jersey hoped for a permanent placement with the Boykins.

The first day was overwhelming. Four people from the state’s Child Protection and Permanency service crammed into the Boykin’s snug home. The state wanted to have a nurse stay overnight to feed Christine, but Jessie soon prevailed on authorities to teach her immediately how to do the feeding herself so there was no need for an extra person in the tidy home.

Christine, though she has continuing health issues, has thrived, put on weight, become more verbal. But her long-term health and development is unclear because so little is known about the genetics behind her disabilities.

In February, when she becomes three, Christine will begin a specialized school program.

Today she’ll be in Camden with her proud family.

And a security blanket.

“What could be more important than matching a child with loving parents inside a stable home?” said Camden County Surrogate Michelle Gentek-Mayer, noting 100,000 kids are in foster care awaiting adoption

“On this day every year we celebrate these beautiful children getting their forever family and work to ensure we can continue getting kids out of the foster care system and into a permanent place to live with loving parents,” Gentek-Mayer added.

The surrogate can be reached at mgentek@camdencounty.com.