We have way too many gimmicky commemorations in America. Whatever. Here are some more to consider. 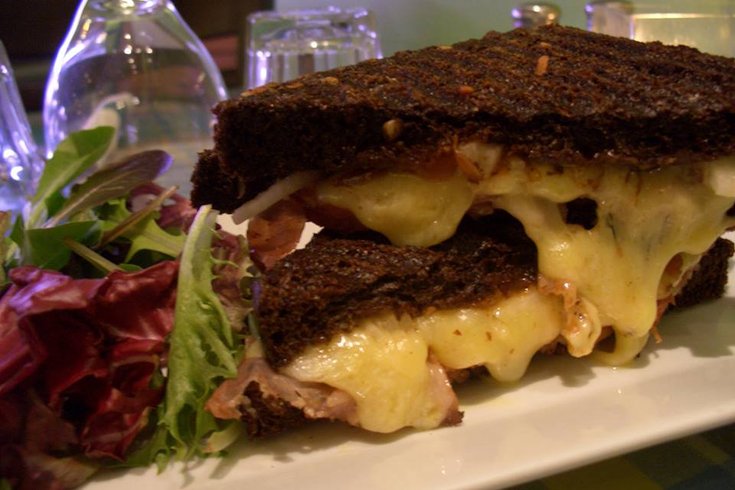 Grilled-cheese sandwiches, done right, are among the world’s best bread-involved products. The simplicity of preparation, coupled with the deliciousness factor, make it so.

However, with all due respect to grilled-cheese enthusiast (and Flyers captain) Claude Giroux on the eve of the NHL playoffs, there should not be a National Grilled Cheese Day. It’s unnecessary. People know the grub is great. Every day can be grilled cheese day if we so choose. We don’t need a celebratory prompt. It is a case study in how gimmickry has taken over our uniting societal forces.

There are enough holidays already, and we have so very many other things we can gather around as a people rather than suffering through a barrage of horrible Jack Sparrow imitations.

But rather than sully the sanctity of the grilled-cheese sandwich, I’ve decided to offer up – in calendar-year order – 10 alternatives for Philadelphia Celebratory Days about which City Council should deeply consider issuing resolutions.

Have an idea for a celebration that I missed? (Full disclosure: I left #DoShot Day off the list because I couldn’t quickly determine what date that phrase was uttered to John Bolaris in South Beach.) Please send your suggestions along in the comments, via Facebook or in a Tweet.

Broken-Bell Tossing Day (Feb. 22): It’s said that the big crack that rendered the Liberty Bell un-ring-able occurred in 1846 when it stopped ringing after damage caused during a celebration of George Washington’s Birthday (itself a date of contention). As a touristastic symbol of Philly’s importance in the grand scheme of all things American creation, perhaps we can hold a bell-throwing (or at least bell peppers) contest on Independence Mall. I mean, they closed the street down for ESPN before the Temple/Notre Dame game. What’s the harm of prompting traffic disruptions in the name of a quirky American celebration?

Pukemon Remembrance Day (April 14): It was the Phillies-fan-behavior heard ’round the world. The story went like this: 21-year-old Matthew Clemmens intentionally puked on an off-duty cop and his 11-year-old daughter at a Phillies game. The subject of giddy scorn, Clemmens tragically died four years later. We chided him in his last years; the least we can do is remember, and celebrate his contributions to Philly fan lore, forever.

Philly Swiss-Cheese Day (June 19 or Aug. 16): Why was this a difficult holiday for which to choose a single day? Well, Christopher “Swiss Cheese Pervert” Pagano was sentenced for slice-of-cheese-related perversions on June 19 while then-Presidential Candidate John Kerry ordered a cheesesteak with Swiss at Pat’s on the latter day. Each is noteworthy in Philly lore. We should just celebrate it twice. Even though provolone is a vastly superior cheese.

Robert “Rocky” Balboa Day (July 6): We have a statue for the fictional character, so why not set aside a day to celebrate the pugilist that some frame as representative of our civil ethos? And what better day to do that than on his “birthday.”

Ok, Philly, who put the tiara and tutu on the Rocky statue as the Mighty Sixers did the same to @KingJames? pic.twitter.com/hYHVBgNizE

Wear Leather When It’s Oppressively Hot Outside Day (July 13): On this date in 1985, Judas Priest lead singer Rob Halford took the stage for the Live Aid show at the long-gone John F. Kennedy Stadium. Sporting leather gear, he rocked out with “Living After Midnight,” “You’ve Got Another Thing Comin’” and a Fleetwood Mac cover. It’s a bold move to wear leather on an 88-degree day (even if the band’s set was early in the day). We should all try it sometime!

Fresh Prince of Bel-Air Day (Sept. 10): Portraying Will “The Fresh Prince” Smith, Will “Entertainer Born In Philadelphia” Smith moved to Bel-Air to live with his Aunt Vivian and Uncle Philip in the pilot episode of the seminal television series that debuted on this date in 1990. What a perfect opportunity for a flash mob – remember those! – to gather and do the Carlton Dance behind the Clemente Rec Center (North 18th Street between Wallace and Mt. Vernon)?

Curse of Billy Penn Cessation Day (Oct. 29): Remember those decades when One Liberty Place’s height over City Hall brought about a sporting-championship curse? Yeah, they ended with a Brad Lidge pitch in the 2008 World Series. Never forget.

Bad-Ass Goretti-Girls Vigilante Justice Day (Oct. 30): Back in 2003, a pervy 25-year-old guy from South Philly exposed himself to more than a dozen students, over the course of a month or so, from St. Maria Goretti High School. On this date, a couple dozen female students – dressed in uniforms, mind you – exacted physical vengeance as “neighbors cheered the girls on and shouted ‘Pervert!’ at the man.” If that’s not quintessentially Philly, I don’t know what is.

Throw Snowballs At Santa Day (Dec. 15): Everybody in the world has taken an isolated 1968 incident and propped it up as emblematic of what Philadelphians do, like, all the time. We should prove them right on this date each year (but for a charity of some sort)!

Jacquin’s Rock And Rye Day (Dec. 21): The first day of the winter solstice marks the ostensible beginning of cold season, so what better way to celebrate the local rye whiskey that made its way into medicine cabinets during Prohibition for its positive benefits?! So hear ye hear ye, all the people who drink (legally), #doshot of Rock And Rye in the name of good health for self, city and nation.