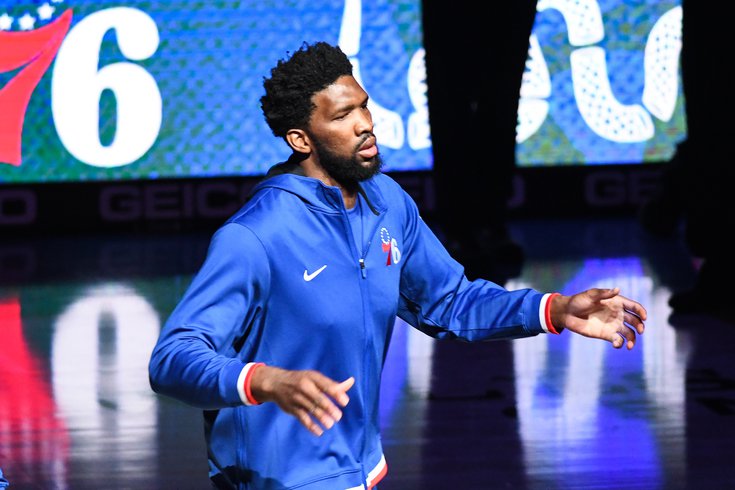 Sixers center Joel Embiid is once again an All-Star starter.

Sixers center Joel Embiid has been named an All-Star starter for the fifth consecutive season, the latest sign of his dominance this season and his growing stature in the franchise's history books.

Embiid now ranks fourth in franchise history in All-Star starts, breaking a tie with a few franchise legends in the process. His fifth start puts him ahead of Charles Barkley, Billy Cunningham, and Moses Malone for All-Star starting nods with the franchise, and he now trails just three men in franchise history: Julius Erving (11 starts), Dolph Schayes (11), and Allen Iverson (eight). He's inching ever closer to Iverson's run of seven straight starts in the All-Star Game from 2000-06, and health permitting, that feels like an eminently achievable goal to hit in the years to come.

(Embiid still has a bit of ground to cover before he can take the franchise's longest All-Star starting streak. Schayes started eight straight from 1951-1958, and Dr. J reigns supreme with 11 consecutive All-Star appearances from 1977-1987, with Erving starting in the All-Star game every season of his Sixers career. Pretty impressive.)

So long as he's playing like this, it's going to be hard to knock Embiid from his perch as a fixture in the starting lineup. Over the last two seasons, he has taken the leap from "great but inconsistent" to every night force who can lay a claim to best player in the world. The ultimate proving ground for that title will be in the playoffs, obviously, but for the last two months, Embiid has been as productive and dominant as any player in the sport.

Heading into Thursday's game with the Lakers, Embiid was right on the heels of LeBron James for the lead in the NBA's individual scoring race, a remarkable feat for a guy also expected to prop up Philadelphia's defense. Embiid is currently averaging career highs in points, free throws, and assists per game while keeping pace with his best in blocks, and steals and cutting down his turnovers. His improvement as a three-point shooter is icing on the cake, a nice bonus on top of the strides he has taken as a ballhandler and playmaker.

Joining Embiid as starters for this year's game: captain Kevin Durant (who is likely to have an injury replacement), Giannis Antetokounmpo, DeMar DeRozan, and Trae Young from the East, along with captain LeBron James, Nikola Jokic, Steph Curry, Ja Morant, and Andrew Wiggins in the West. It's a reminder of exactly where Embiid stands in the league hierarchy, a group littered with champions, MVPs, and the league's most productive individual performers.

Last season, Embiid's All-Star experience was taken from him and teammate Ben Simmons as a result of a COVID exposure from a barber they used. Both players would eventually end up testing negative for the virus, but Embiid's opportunity to further cement his place among the league's elite fell to the wayside.

If that sounds a little dramatic — especially because Sixers fans were probably happy to see him avoid a potential injury — consider how the 2020 All-Star Game played out. With the NBA using the "Elam Ending" for the first time ever, the final stretch of the game was a tight-fisted affair with little-to-no subbing. And with Embiid sharing the floor next to Antetokounmpo, Kyle Lowry, Pascal Siakam, and Kemba Walker, it was the big guy they turned to on a lot of key possessions down the stretch. Even with the Sixers in the midst of a relatively hellish season in Philadelphia, that show of faith from his All-Star teammates said something about the big man's cache.

Two years later, he has done everything in his power to prove that clout has been well-earned over the years, and that the best is still yet to come. Whether the Sixers make a move at the deadline or not, they head down the stretch of the regular season with the knowledge they have one of the best players in the world in their midst, and that brings a sense of comfort.