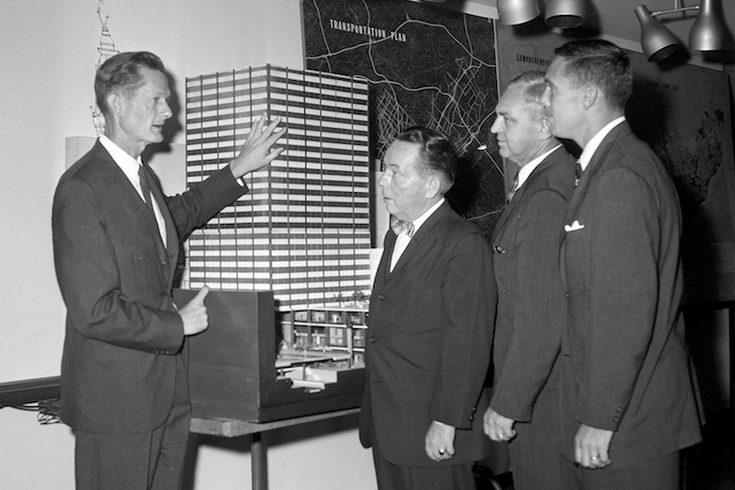 Edmund N. Bacon, left, executive director of the Philadelphia City Planning Commission, describes the Market East Project, which Philadelphia now has underway between Eighth and Market streets. The men at right are visiting from Norfolk, Virginia. They are, from left: Donald R. Locks, Clifford L. Adams and Harvey Lindsay Jr.

Without Edmund Bacon, Philadelphia simply would not be what it is today. So many of the city's most recognized modern-day features – Society Hill's greenways, Independence Mall, Market East, Penn's Landing and the Far Northeast – are due to Bacon's sway as director of the City Planning Commission from 1949 to 1970.

Yet Bacon's reputation as a visionary proponent of urban renewal has never been without its critics, including some of his own contemporaries, who pushed back against the notion that neighborhoods should come at the expense of the city as a whole.

An upcoming documentary about one of Bacon's chief ideological opponents will shine a light on several aspects of this conflict in urban planning, at times taking direct aim at Bacon.

Altimeter Films' "Citizen Jane: Battle for the City" chronicles the story of grass-roots activist and writer Jane Jacobs, whose 1961 work "The Death and Life of Great American Cities" drove a new emphasis on organic growth and preservation in the field of urban studies.

Director Matt Tyrnauer, discussing the film with Page Six, explained that Jacobs often challenged Bacon directly as both a journalist and rising thinker operating in a changing philosophical landscape.

“There is a part of [Jacobs'] book where Bacon is showing off his beautiful new streets of Philadelphia, and she points out that the old areas he considered slums were more vibrant and lively than what he created,” Tyrnauer said. “He was not happy.”

Jacobs had a knack for getting in the faces of "rationalist" planners she felt were draining vitality and originality from cities for the sake of reaching pragmatism. Her famous run-ins with city planner Robert Moses over the fate of Greenwich Village and other facets of New York City made her issues with Bacon pale in comparison.

Agents of change in civilization typically evoke the kinds of conflicting viewpoints Hidden City Philadelphia picked up about Bacon during a series of interviews intended to put his influence in perspective a few years ago.

In truth, Bacon's legacy is complex and likely incomplete, as illustrated by historian Greg Heller — who now heads the Philadelphia Redevelopment Authority — in his biography, "Ed Bacon: Planning, Politics, and the Building of Modern Philadelphia."

"Citizen Jane: Battle for the City" premieres Friday, April 21, and will open in Philadelphia Friday, May 5, at The Ritz at the Bourse.