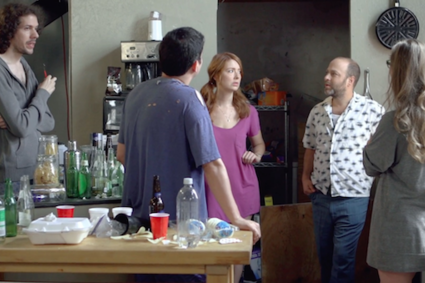 The cast of "All Over It," including H. Jon Benjamin (second from the right).

A new web series following a group of millennial artists living and working together is based right on the corner of 6th street and Girard Avenue.

Entitled "All Over It," the show was shot in 2012 and used a local crew, according to Philly Mag.

In the promo for the series, several locations in and around Fishtown and Olde Kensington can be seen, such as under The El and inside Kung Fu Necktie. The website for the show describes itself as:

"All Over It" is a liveplace/workplace comedy about the exploits of a scrappy band of co-working/co-living Philadelphia artists trying desperately to sell out to the first available bidder, without injuring themselves or each other.

A profile on Philly.com says that the show's creators Ted Pauly and Melissa Silverman first tried to sell the show as an entire 22-minute pilot, but split it into smaller segments for the web after that proved unsuccessful.

H. Jon Benjamin, known for his voice roles on "Archer" and "Bob's Burgers" is the narrator of the series and also plays the landlord for the apartment/workspace inhabited by the main cast. Benjamin delivers a line so perfectly bizarre in the first episode that it's hard not to get excited for the rest:

"It's like having sex with robots, making pasta on the moon. It's dub-step."