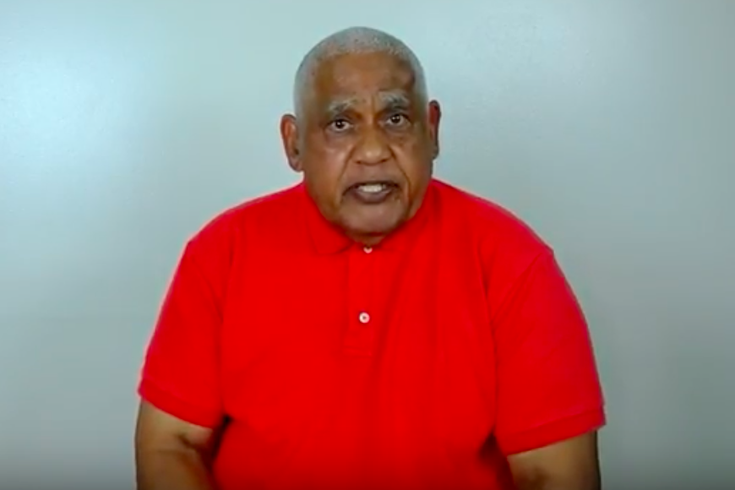 Screengrab from YouTube/Courtesy of Milton Street

On Thursday, June 9, 2016, T. Milton Street Sr. released a video explaining why he hopes to run as an independent in November's 2nd Congressional District general election.

So, yes, T. Milton Street Sr. – a Philadelphia treasure – will again launch a seemingly quixotic campaign for public office, something he’s held before but hasn’t held for a while.

This time around, as foreshadowed in several news stories this week (including ours!), Street will run as an independent in the 2nd Congressional District race.

You know, the one that state Rep. Dwight Evans defeated on-trial incumbent Chaka Fattah for in April’s primary.

You know, the one about which Street’s daughter Renee Toppin released a video questioning why Evans would challenge an established African-American incumbent.

Anyway, we won’t rehash his reasons for getting into this race beyond reprinting a portion of his Facebook announcement …

TO VOTE IN THE SECOND Congressional district who want to stop the violence in our community and schools.I have decided to challenge representative Dwight Evans in the November election.

My name will appear on the ballot under the heading ( STOP THE VIOLENCE).

I have a passion for, and am committed to, stopping the violence in the community. Black lives will never matter until we stop killing people, destroying property and disrupting classes. My 414 plan addresses all of those issues. That's why I'm running and I will continue to keep this issue in front of voters, as I have for eight years now, until I get people to latch onto it.

It's all a result of the one-party political system. There's no accountability. This year, it's especially important because no candidate can win the presidency without the black vote, especially Hillary Clinton. You hear about efforts to get Hispanic votes, white male votes, female votes, but no discussion about how to get the black vote. That's based on black people voting with the same patterns election after election. Until blacks take responsibility for that, things will never change. I am the only candidate that has a plan, but if you look at Facebook [comments], they don't attack the plan, they attack the man.

… and a quote he offered up to the Inquirer’s Chris Brennan earlier this week:

"I don't have anything against Dwight Evans. My issue is, he should have to work for the seat between now and November. I'm going to make him work."

As to questions about eligibility raised in that story related to party affiliation and deadlines, Street noted that "I will be on the ballot."

"I chuckle at it because it's unconstitutional as hell," he told PhillyVoice just 10 minutes before posting his video on Thursday morning. "I was a Chaka Fattah supporter because of his seniority. I'm not going to forego my right to vote in the primary because I might run as an independent later."

Instead, let’s examine the video he just posted on Thursday to formalize his mission to secure 3,623 signatures within the next eight weeks. (Street said he already has "60 people who say they'll get 100 people to sign.")

Over the course of more than 13 minutes, he breaks down the tenets of community building and how to parlay that into political power.

It is a familiar Street message, drilled down to a desire to convince African-Americans to address the violence in their neighborhoods, which prevents any semblance of economic investment from the public sector.

At least one opponent, Republican candidate James Jones, is happy that Street entered the race. In fact, the city's Republican Party issued a press release about it. To wit:

"It's notable that Milton Street dismissed our Republican candidate, James Jones, as 'not political,'" wrote city GOP chairman Joe DeFelice. "Might we suggest that being 'not political' is an asset in a city where we have multiple elected officials on trial for corruption charges, a state Attorney General who has turned her office into a suicide bunker and a woman running to represent us in the Senate who lies flagrantly on the stump, whether it's about her history as a lobbyist or whether her siblings went to college before her."

Oh yeah, lest we go down that Street residency rabbit hole again, here’s a video I shot last February during which he addressed it with reporters at City Hall’s Board of Elections office.

On behalf of all journalists who cover politics in Philly, thank you, Milton Street.