Newlyweds hit all 50 states in RV, taking jobs at each stop 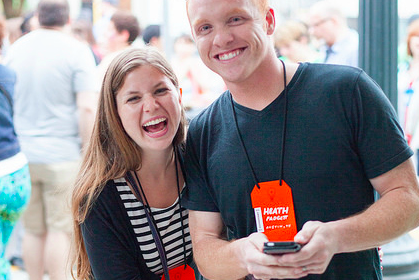 Heath and Alyssa Padgett travel across the country in an RV, working hourly jobs and producing documentaries that help inspire young people to achieve personal and career goals.

As everyone looks ahead to the New Year, it's common to make all sorts of resolutions that sometimes amount to a full-on bucket list. Sometimes, it takes one or two big changes to enable mixing the rest into your lifestyle from week to week and month to month.

One couple's story could serve as an inspiration for those looking to take an unconventional path in the coming year. Heath and Alyssa Padgett fell in love at Concordia University in Austin, Texas, and decided to get hitched when they graduated. instead of settling into a routine, the couple quit their jobs in order to follow in the footsteps of their grandparents, who had a hobby of trekking the country in an RV, People reports.

Seeking a cheap and efficient way to travel for their honeymoon, Heath and Alyssa purchased an old RV and gave themselves a goal of hitting all 50 states. Heath wanted to add structure to it, so he sought out temporary job opportunities in every state through the website SnagAJob.com, which connects job seekers with employers for hourly work.

In exchange for a sponsorship and financial assistance from the site, Heath and Alyssa each had to blog and film their journey, including stops at Denali National Park in Alaska, where Heath was as a park ranger's assistant, and at Six Flags in Maryland, where both served as zombies during Fright Fest. Their gigs are captured in the documentary series entitled "Hourly America."

Despite some technical difficulties (of course the RV – named, for whatever reason, "Franklin" – broke down near the Grand Canyon), the pair was able to solidify their relationship in close quarters and accomplish some of the goals they wouldn't likely have been able to had they denied themselves the risk.

Now, the Padgetts offer a course, "How to See America on 2K/Month," and have a book out called 'The Ultimate Adventure.' They even liked Franklin so much that they plan to continue living in it for another 2-3 years as they continue to travel and inspire those who want to learn from their approach to career development.

Watch the trailer for "Hourly America" below and learn more about Heath and Alyssa at their respective blogs.