Week 10 of the NFL season is in the books, and it was a big one for parity, as five of the top seven teams in the conference lost. There are no new obituaries. 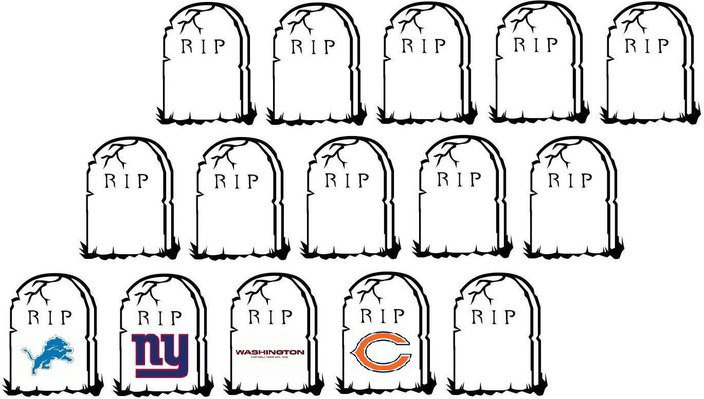 12) Falcons (4-5): If the season ended before Week 10, the Falcons would have been the 7 seed in the NFC. After they got thumped 43-3 by the Cowboys, there are only three teams in the league have a worse point differential than Atlanta this season:

11) Eagles (4-6): The Eagles have the third-easiest remaining schedule in the NFL, and the easiest in the NFC. Via Tankathon:

But it's even easier, given proper context, since the Saints are now being led by Trevor Siemian, and the Cowboys, who are extremely likely to have the NFC East wrapped up before Week 18, are candidates to rest their starters. The Eagles could catch a break if Dallas has little else to play for, such as a first-round bye.

Oh, and the Eagles still have their bye to look forward to, and they don't board a flight the rest of the season.

The Eagles are a game behind the Panthers, a team they already beat, for the 7 seed. They're 1.5 games behind the Saints, the team they play this Sunday, for the 6 seed. If the Eagles can beat the Saints, I imagine those percentage points will rise significantly.

10) Panthers (5-5): The Panthers are one of the funnier "This is our time" teams in recent memory. They have traded for Sam Darnold, C.J. Henderson, Stephon Gilmore, and have now brought Cam Newton back to Charlotte for their stretch run.

They're probably going to look justified in those actions with wins upcoming during a three-game stretch against the Football Team, Dolphins, and Falcons, but they'll be right back to mediocrity when they have to face the Bills, Saints, and Buccaneers twice to close the season.

9) Seahawks (3-6): The Seahawks got shut out in Russell Wilson's return, as Wilson threw two ugly interceptions into double coverage in the end zone.

This one was really bad:

And this one wasn't much better:

Russell Wilson with a MISSILE to Adrian Amos 🚀
pic.twitter.com/lkpdz0031z

The Eagles need to be very careful they're not going after some lesser version of Wilson, if that's a course they're considering this offseason.

Also, we should probably note here how impressive Deebo Samuel's season has been. With Jimmy Garoppolo as his quarterback, Samuel has 54 receptions for 979 yards, 18.1 YPC, and 5 TDs (on pace for 102-1849-9), plus a couple of rushing TDs.

7) Vikings (4-5): The Vikings are my official sneaky-decent, slept on team this season that has a shocking wildcard round win over the 2 or 3 seed in the wildcard round.

I'll be recalling the above proclamation in a future hierarchy if that happens. It will go forever ignored if it doesn't.

Good to know that after a close loss, Sean Payton is handling himself well. pic.twitter.com/v01tHj53uX

5) Rams (7-3): Prior to the NFL trade deadline, I had turned on Twitter notifications for a handful of national reporters in case the Eagles made a move I didn't see coming. I was slow to turn those notifications back off, and over the last two weeks, my phone has been dominated by Odell Beckham Jr. news.

Where is OBJ signing? How much is he going to sign for? What number will he wear with his new team? What did he have for breakfast? I don't think there has ever been a more irrelevant player to get the level of attention that OBJ has gotten over the past 2-3 weeks.

Meanwhile, Robert Woods, a better player than OBJ, was lost for the season with a torn ACL. That's more noteworthy than the Rams' signing of OBJ, and if you didn't follow the NFL super closely, you might not even know Woods got hurt because that news pretty much came and went like a fart in the wind.

On the very first Rams series with OBJ replacing Woods, this happened:

The Rams are in trouble. The interior of their offensive line is creaky, and a professional, productive wide receiver is being replaced in their lineup by an overrated crybaby.

2) Cowboys (7-2): I respect the 43-3 smackdown of the Falcons after a really weird blowout home loss to the Broncos.

In the NFC playoff race, it's especially ideal this year to at least land the 3 seed to ensure a manageable first-round matchup against a mediocre 6 or 7 seed. The Cowboys and Packers made big moves this week with the Cardinals, Bucs, and Rams all losing.

1) Cardinals (8-2): While missing Kyler Murray and DeAndre Hopkins, the Cardinals lost 34-10 to a sucky Panthers team Week 10. They were able to win Week 9 without Murray and Hopkins.

If you were to go in the "wayback machine" to Week 9 and you were offered a split of two games without Murray and Hopkins, you'd probably take it, so I won't drop the Cards in the hierarchy for now. Apparently, it'll be "close" whether Murray plays in Seattle Week 11.

Kliff Kingsbury said again that the @AZCardinals will be careful with Kyler Murray's return. They are aware they have only a game left before the bye, which brings more rest.

As far as Murray playing in Seattle, "it's going to be close."